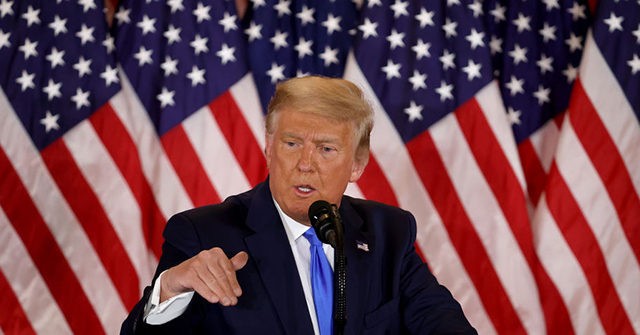 The survey, taken November 13-17 among 1,346 U.S. respondents, found 73 percent expressing the belief that Joe Biden (D) won the election, compared to five percent who chose Trump. However, 53 percent of Republicans, specifically, believe Trump “rightfully won,” while less than a third, 29 percent,  said the same for the former vice president:

About half of all Republicans believe President Donald Trump ‘rightfully won' the U.S. election but that it was stolen from him by widespread voter fraud that favored Democratic President-elect Joe Biden, according to a new Reuters/Ipsos opinion poll. https://t.co/Ya7kX95sDN pic.twitter.com/tiLEkQPUOO

According to Reuters, an even greater majority of Republicans expressed concern that the election was, in fact, “rigged”:

Asked why, Republicans were much more concerned than others that state vote counters had tipped the result toward Biden: 68% of Republicans said they were concerned that the election was “rigged,” while only 16% of Democrats and one-third of independents were similarly worried.

Overall, the survey, which included a sample of 100 more Democrats than Republicans — 598 Democrats to 496 Republicans — found 55 percent expressing the belief that the election was “legitimate and accurate.” According to Reuters, that percentage is “down 7 points from a similar poll that ran shortly after the 2016 election.” Over a quarter of Americans believe the election was “the result of illegal voting or election rigging” — a double-digit increase from 2016.

“This was a rigged election. No Republican Poll Watchers allowed, voting machine ‘glitches’ all over the place (meaning they got caught cheating!), voting after election ended, and so much more,” Trump said in reaction to the Reuters/Ipsos survey:

This was a rigged election. No Republican Poll Watchers allowed, voting machine “glitches” all over the place (meaning they got caught cheating!), voting after election ended, and so much more! https://t.co/YDh7A7wxLW

The survey’s margin of error is +/- five percent.

It coincides with a Politico/Morning Consult poll, which showed that 46 percent of Americans want Trump to concede “right away.” The survey reflected similar skepticism from Republicans, specifically, with  67 percent doubting that the election was “free and fair.”

On Wednesday, President Trump blasted the Pennsylvania Supreme Court’s 5-2 decision rejecting the Trump campaign’s claim that observers did not get “meaningful access” during the vote count in the Keystone State, calling it a “terrible insult to our Constitution!”:

They didn’t even allow Republican Observers into the building to watch. A terrible insult to our Constitution! https://t.co/Q8RgaTs6ev