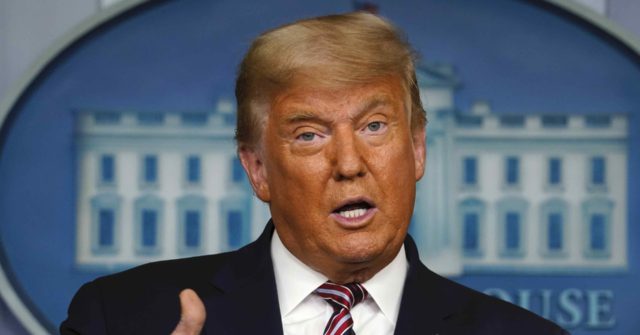 The three major news networks — ABC, CBS, and NBC — all cut away from President Donald Trump during a press briefing on Thursday evening in which he was discussing his view of the 2020 election results, including the presidential race.

Trump said: “If you count the legal votes, I easily win. If you count the illegal votes, they can try to steal the election from us.” The Biden campaign likewise claimed Wednesday that it “won,” though Joe Biden himself has put that in future tense.

The president detailed Republican successes in the election — and irregularities in the vote count in several places.

MSNBC cut away — followed by the three “alphabet” networks.

Trump reminded reporters — who remained in the White House briefing room — that he had been leading in several states by wide margins on Election Day, and that his lead had been “whittled” down as mailed-in ballots had been counted in cities. He predicted that there would be “a lot of litigation” before the final result was known, because of large-scale vote-by-mail.

The president concluded by saying he would leave the final outcome of the race to be made by the courts: “It’s not a question of who wins — Republican, Democrat, Joe, myself. We can’t let that happen to our country. We can’t be disgraced by having something something like this happen. So it will be hopefully cleared up, maybe soon, I hope soon. But it will probably go through a process, a legal process. And as you know, I’ve claimed certain states, and he’s claiming states, and we can both claim the states, but ultimately I have a feeling judges are going to have to rule. But there have been a lot of shenanigans and we can’t stand for that in our country. Thank you very much.”