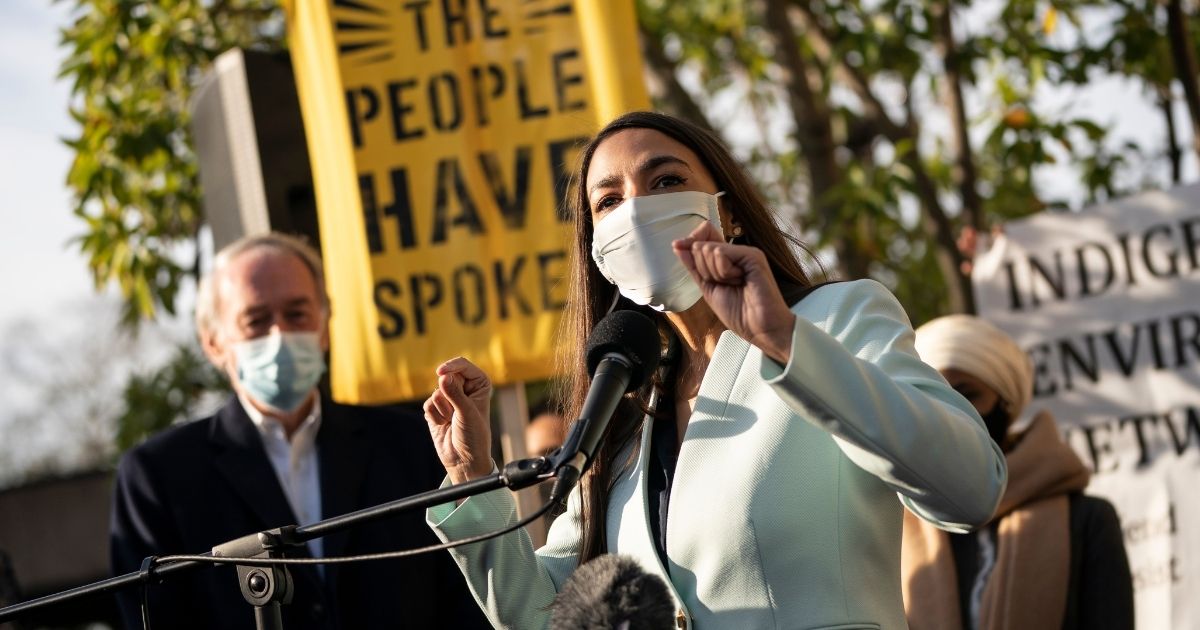 Alexandria Ocasio-Cortez is back at it, proving again that so-called “democratic” socialists have no idea what they’re talking about.

On Tuesday, the New York congresswoman promoted some of her official campaign merchandise on Twitter, including, quite hilariously, a $58 “Tax the Rich” sweatshirt.

The irony here, of course, is that rich or at the very least well-off people — the ones targeted by the sweatshirt — are more likely to be able to drop $58 on the piece of clothing.

TRENDING: Rules for Thee Not for Me: Chicago Mayor’s Security Team Gets Traffic Fines Dismissed

The hilarious hypocrisy on the part of the anti-capitalist, democratic socialist representative was quickly pointed out by various voices on Twitter.

When you’re aiming for socialism but you hit capitalism

Breaking: If you are rich, you can now buy a tax the rich sweatshirt on @AOC’s site for $65. pic.twitter.com/r3euQnmNTW

Still laughing about AOC selling ridiculously expensive swag that says “Tax the rich.” That pretty much sums it all up right there.

“Still laughing about AOC selling ridiculously expensive swag that says ‘Tax the rich.’ That pretty much sums it all up right there,” Fox News contributor Lisa Boothe wrote.

There’s an even greater hypocrisy here that speaks to the core of AOC’s anti-capitalism philosophy.

“Capitalism is an ideology of capital — the most important thing is the concentration of capital and to seek and maximize profit,” she said in 2019, according to Bloomberg.

“To me, capitalism is irredeemable.”

Less than two years later, AOC is using capitalism — an apparently “irredeemable” ideology — so that her campaign can raise money off of an inherently anti-capitalist slogan. (It’s also worth wondering whether the social justice warrior congresswoman thinks the proletariat’s hard-earned money is best spent on this overpriced sweatshirt.)

WARNING: One of the following tweets contains vulgar language that some readers may find offensive.

In addition to her “Tax the Rich” shirt, AOC is selling various other items of clothing ripe with equally hypocritical sentiments.

Renowned conservative commentator Ben Shapiro spent part of his Thursday morning tweeting out the inherent irony in these shirts as well.

Nothing says economic justice like spending $65 on a sweatshirt pic.twitter.com/IiOWW5857U

For $27, you can buy AOC’s bullshit t-shirt rather than spending it paying off loans you voluntarily took. pic.twitter.com/dLEV3jkBc4

You have to love the humility of AOC painting herself into “Wanderer Above A Sea of Fog” to promote her garbage, ridiculous Green New Deal. And you can love it, for the price of $27. pic.twitter.com/7Ce9VId0nU

It’s truly amazing that someone as ill-informed as AOC has become one of the most prominent thought leaders of modern-day liberalism.

She truly embodies all of the horrible ideas that the American left stands for these days.