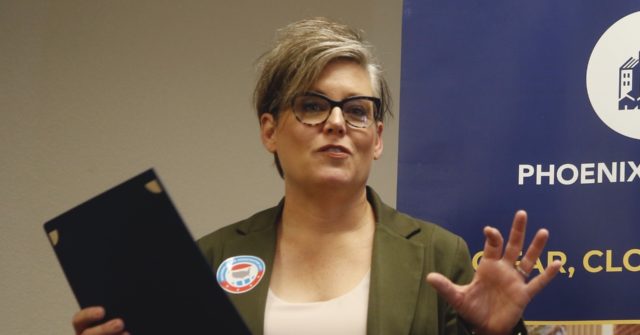 Arizona Secretary of State Katie Hobbs said in 2017 that President Donald Trump’s “base” of supporters were “neo-nazi” [sic].

Hobbs, who is overseeing the closely contested vote in Arizona, was a Democratic state senator immediately prior to being elected Secretary of State in 2018.

She was far behind on Election Day, but eventually surpassed her Republican opponent as more votes were counted in the days that followed.

.@realDonaldTrump has made it abundantly clear he’s more interested in pandering to his neo-nazi base than being @POTUS for all Americans.

Hobbs appeared to be reacting to news reports about the riots in Charlottesville in August 2017.

The President is on the side of the freaking Nazis. Don’t just say stuff – DO SOMETHING!!! https://t.co/Es9ScskF58

It took you a day and a half to figure this out? Also if you’re not condemning @POTUS for not condemning nazis, it’s just words. https://t.co/OI0JAlvOYX

The president did, in fact, condemn extremists on all sides in Charlottesville. While he did not single out any group in his initial statement, he later made two separate specific condemnations of the neo-Nazis. The timeline was as follows:

Last week, Hobbs predicted that there would be no recount of the presidential vote in Arizona.

As of Thursday morning, Joe Biden led Trump by over 11,000 votes in the state.