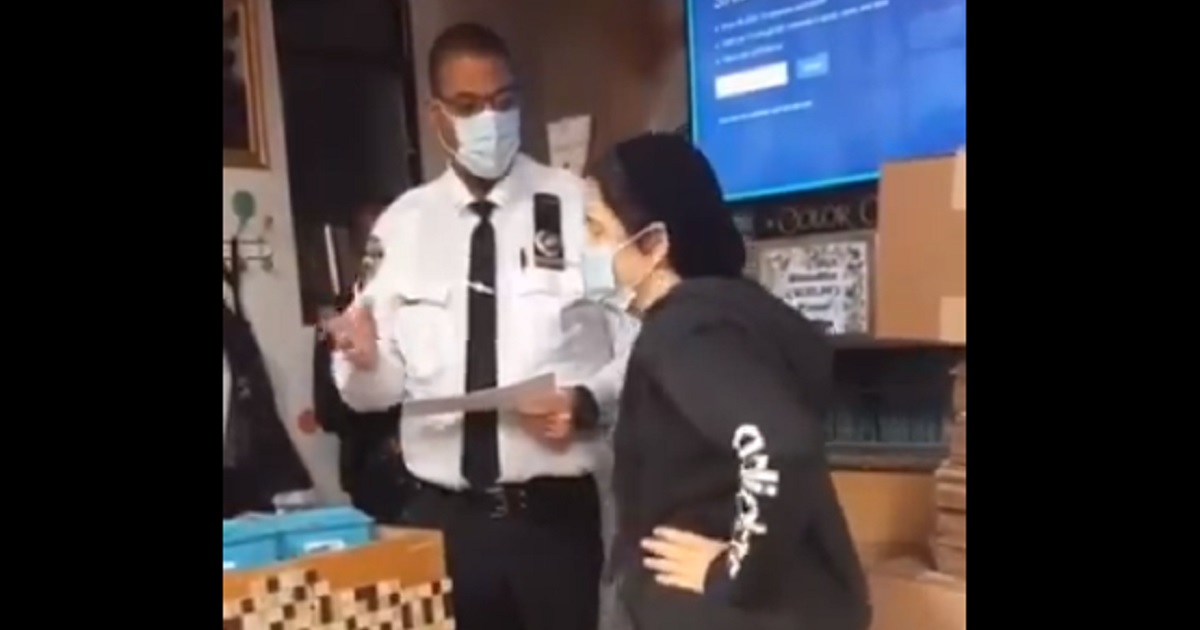 On Saturday, tens of thousands of people teemed throughout the streets of New York City to celebrate Joe Biden’s apparent election victory. Yes, they were outdoors — at least as far as we could see.

However, the main celebration was in Times Square, an area not known for vast swaths of affordable residential property. That meant thousands who used public transportation, Ubers or taxis to get to and from Times Square, or other celebrations. There were also, one suspects, parties that took place out of view and indoors.

There were no warnings from New York City Mayor Bill de Blasio about these celebrations. Nothing about partying safe. No interference from the authorities.

Meanwhile, in the very same city, authorities issued a summons to a small craft business called Pottery and Glass Land for violating the state’s so-called “red zone” restrictions for merely being open, even if she wasn’t serving customers. Owner Ilena Cagan told the Orthodox Jewish news site Voz Iz Neias she was packing up stuff to ship and, it “literally looked like a drug bust.”

This was the video of the action that went viral after New York City Councilman Chaim Deutsch tweeted it:

Last night, as thousands of New Yorkers partied in the streets, sheriffs entered this pottery shop, owned by a single mom of five.

With no income coming into her “red zone” business, the owner was harassed while preparing craft kits to sell for the upcoming holiday. pic.twitter.com/mgjuGK0YEM

“Last night, as thousands of New Yorkers partied in the streets, sheriffs entered this pottery shop, owned by a single mom of five,” Deutsch wrote in a Twitter post Sunday, the day after the election was called for Biden by the media.

Is this kind of COVID-19 crackdown called for?

“With no income coming into her ‘red zone’ business, the owner was harassed while preparing craft kits to sell for the upcoming holiday.”

In the video, Cagan laments that “everyone else is open, and I’m not allowed to be open.”

When the officer speaking with her intimates that’s a point she can raise with someone else, she responds “that’s very nice, but it’s about paying my bills.”

According to Voz Iz Neias, Cagan was hoping to open on Sunday, but spent Saturday evening simply packing up stuff with her assistant. Then, at 8 p.m., she was interrupted by law enforcement agents, who said they had a tip she was holding classes in her Flatbush, Brooklyn business.

“I told them to look around,” Cagan told Voz Iz Neias. “There was no one there but me.”

And talk about priorities!

“They were all making parties last night and I had the head lieutenant of whatever precinct waiting for me,” Cagan told the news site. “It was as if I had pounds and pounds of drugs in my store with the amount of people that showed up. It wasn’t just regular building department inspectors — it was sheriffs with a list of people to target.”

In case you haven’t noticed the problematical undertone here, Cagan is a Jewish woman with a business based in the heavily Jewish community of Flatbush; Mayor de Blasio has aimed New York City’s officialdom at the Jewish community with a vehemence that consistently raises eyebrows. This incident won’t help, particularly since conservatives quickly picked the video up:

And, of course, there were these reactions:

This DEFINITELY is staged!

Yes, a business owner managed to stage a raid with uniformed officers, had an assistant record it (apparently with such steadiness to call attention to itself) and then got no pushback from New York City officials after the video went viral and published by Fox News. What’re the odds?

The video again calls attention to the city’s strange selective enforcement. Moving beyond the curious focus on the Jewish community, there’s also the issue of the social activities the city wants to quash and is willing to countenance.

On Monday, de Blasio said at a news conference that “one of the most crucial things that’ll happen in the next two months, of course, is the holidays, and the holidays we associate with travel and the holidays we associate with big indoor gatherings, big meals together – that, unfortunately, this year can’t be the case, because if you look at the numbers that we’re going to go over now, you’re going to see loud and clear we’re in a dangerous situation and we have to change our habits.”

In short, no Christmas, no Hanukkah, no Thanksgiving. And as for Turkey Day traditions, there also won’t be a Macy’s Thanksgiving Day Parade this year.

But congregate on the streets all you want because you’re a Joe Biden fan. No one, apparently, was willing to interfere with that one.

And then there are Gov. Cuomo’s “red zones.”

According to Patch, the red zone in Brooklyn — which necessitates the most restrictive measures on businesses — was downgraded to an orange zone earlier this week, which means businesses like Pottery and Glass Land can reopen. Wonderful. That still doesn’t properly explain the decision to send a phalanx of officers to investigate claims Cagan was holding classes at the same time parties were happening all over the city because Biden was declared the victor.

This isn’t about stopping the coronavirus. It’s COVID-19 theater. It’s meaningless — unless, of course, you’re on the receiving end of this treatment. Then it could cost you your livelihood.

CNN Anchor Pins Down House Dem, Gets Him to Admit Parts...

Contact Arizona Senate and Demand They Audit All Arizona Ballots (Not...