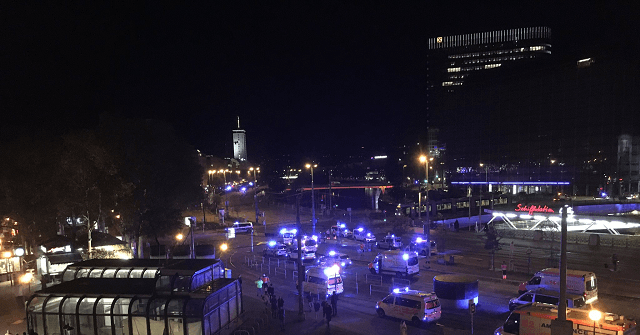 Police in the Austrian capital of Vienna launched a manhunt Monday evening after a synagogue in the city was attacked by one or more gunmen.

Police have confirmed there are several injured tonight in Vienna. Meanwhile, Israeli public broadcaster journalist Amichai Stein has shared footage alleging to show one of the attackers — out of a claimed three — running and shooting with a long gun.

3 suspects are said to have been involved in the attacks in Vienna https://t.co/WvViy6nR0T

The original story continues below…

Officers responded to an attack on a synagogue on the Seitenstettengasse in Vienna’s downtown first district Monday night. Best-selling Austrian newspaper Kronen Zeitung reports an officer who had been guarding the synagogue — common practice in European cities where antisemitism is on the rise — had been shot and is in critical condition.

Several Austrian newspapers also state that an assailant blew himself up at the scene of the attack, and others may be at large, although city police have not yet confirmed details beyond that a major incident operation is underway, shots had been fired, and there were injured people at the scene.

A social media video circulating and shared by Austrian mainstream media — confirmed to show Vienna’s Schwedenplatz by Breitbart London — shows police vehicles while gunshots can be heard in the background.

VIDEO: Latest emerging from Vienna. Reports, unconfirmed of attacks on multiple locations, at least one person killed and a manhunt to find multiple attackers pic.twitter.com/BB64c0qllN

This story is developing. More follows…

We Owe the Lincoln Project Our Thanks

Biden Walks Away When Asked About the Sacrifices He’s Asking American...