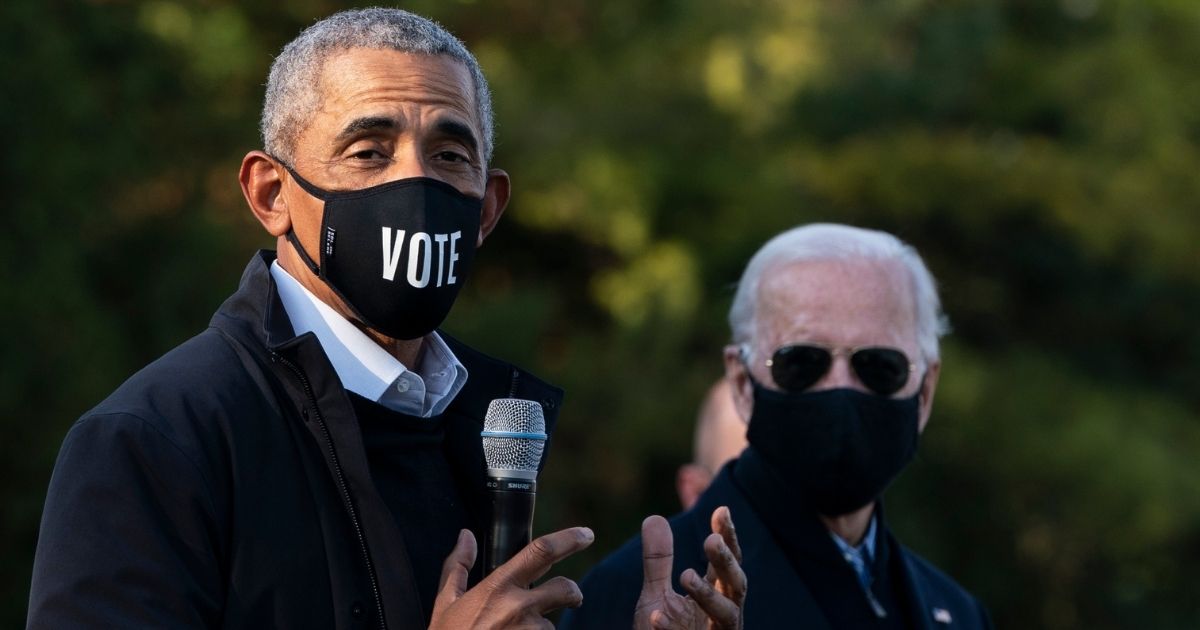 Former President Barack Obama criticized Democrats this week for being too “old” and for failing to allow younger people to take on meaningful roles leading the party.

Despite campaigning for Biden, who is the epitome of the Democratic establishment, the former president complained about the party’s aging leadership during an interview with Snapchat’s “Good Luck America” host Peter Hamby posted to YouTube on Wednesday.

Obama complained to Hamby that the same “old folks” are running the party.

“Now one thing I will say about the Democratic Party: Promoting young people is really important,” Obama said.

“We stick so long with the same old folks and don’t make room for new voices,” he complained.

That’s rich, to say the least.

Obama, who campaigned for Biden the swamp dweller, now says he wants the voices of those young Democrats to be heard.

“Let the young people lead” is a convenient message, now that voting has concluded for this election cycle.

Do you think Democratic leaders are hesitant to allow the party’s radical wing take over?

Obama appears to be playing to both sides of the party he led for eight years.

That makes sense, as he’s now hawking yet another book he authored about himself.

He apparently still knows how to play the D.C. game, which is to appease as many people as possible in a party dealing with growing pains as young elected Democrats begin to take prominence in a party they will soon shape policy for.

But young Democrats are mostly policy radicals, and in the media and online, they are represented mostly by de facto leader Rep. Alexandria Ocasio-Cortez of New York.

AOC and her “squad” ilk have a losing message, and reasonable Democrats seem to understand that — especially as they reconcile with the aftermath of the party’s losing ground in the House this year as they were defeated down the ballot all over the country.

RELATED: Ilhan Omar and the ‘Squad’ Turn Against Obama Over His ‘Defund the Police’ Comments

It’s arguably why he waited until after the election — after he supported Biden — to call for younger Democrats to have a larger role in shaping the direction of the party.

The Democrats now hold the House only by a thread, and party infighting suggests that moderate Democrats understand that many voters simply aren’t on board with the policy positions of young elected Democrats.

Obama even specifically referred to Ocasio-Cortez and her limited speaking time at the Democratic National Convention during his interview with Hamby.

“The fact that an AOC only got, what? Three minutes or five minutes? When she speaks to a broad section of young people who are interested in what she has to say, even if they don’t agree with everything she says,” Obama said.

But the former president wasn’t complaining about AOC’s limited role in August, September or October.

Are we to believe that his suggestions are empty?

It’s entirely appropriate to speculate that Obama knows what other establishment Democrats know, and that is that young Democrats are likely only to alienate voters with their radical positions, as they arguably did throughout this past year.

Obama also commented on the elephant in the room — and that elephant wasn’t the GOP mascot.

“Socialism is still a loaded term for a lot of folks,” Obama said.

“Once again, instead of talking labels and ideology, we should focus on talking about getting certain things done,” he said, arguing that young Democrats should work together with the party establishment to achieve the party’s goals.

He also said something to Hamby that drew the ire of some young party radicals, which was that “snappy” slogans like “defund the police” were damaging to the party in 2020.

“You’ve lost a big audience the minute you say it, which makes it a lot less likely that you’re actually going to get the changes you want done,” he told Hamby. “The key is deciding, do you want to actually get something done, or do you want to feel good among the people you already agree with?”

Obama, to his credit, is right about the poor messaging from Democrats in 2020.

Unlike younger liberals, Obama was always much more subdued and disciplined in his packaging of radicalism.

We can probably guess why the voices of young Democrats were drowned out by party elders such as House Speaker Nancy Pelosi, 80, Senate Minority Leader Chuck Schumer, 70, and the man anointed by the Democratic establishment to become the presidential nominee last winter, now-78-year-old Biden.

It’s arguably because establishment Democrats, including Obama, have the political acumen to recognize that outright embracing socialism is, for the time being, a losing proposition in a country that is more or less center-right.

But conservatives should join Obama in championing the voices of young Democrats, even if his words on the subject are hollow.

The Democratic Party should absolutely pass the torch on to AOC and her House colleagues.

Not even the establishment media could spin their extreme statements and positions into something positive, and voters on the fence might finally see just how out of touch the new Democratic Party has become with working-class Americans.

The GOP is now the big-tent party, and young elected Democrats, the more they talk, are likely to keep driving voters toward the Republican Party.

‘Ask Not What Your Country Can Do for You’