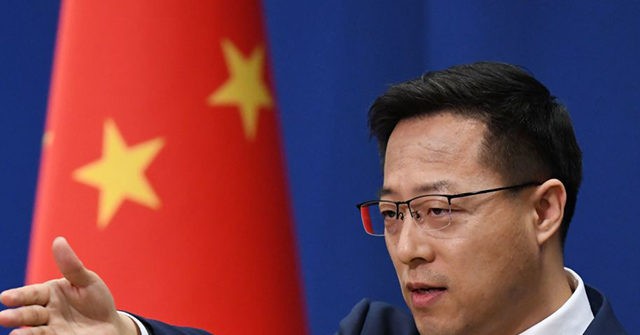 “No matter how many ‘eyes’ you have, be careful not to be poked and get blind by harming China’s sovereignty, security and development interests,” Zhao asserted.

On November 11, LegCo, now a firmly pro-China institution, expelled four opposition members under a Beijing-imposed measure enabling the local government to remove legislators should they “support Hong Kong’s independence or refuse to acknowledge China’s sovereignty over the city.” Removal does not require a trial of any sort.

Alvin Yeung Ngok-kiu, Kwok Ka-ki, and Dennis Kwok Wing-hang — all Civic Party members — and Kenneth Leung Kai-cheong, of the Professionals Guild, lost their seats in LegCo and were barred from running in the next election, which has been indefinitely postponed due to the coronavirus pandemic.

The state-run Global Times described the four as having “infamous records for creating trouble” and being “unfit for their LegCo duties.”

“We deplore and firmly oppose relevant country’s finger-pointing over China’s Hong Kong affairs, which is a flagrant violation of international law and basic norms governing international relations,” Zhao said in the press conference.

Since the U.K. relinquished control of Hong Kong to China in 1997, it had been an enclave of liberty, governed under the premise of “One Country, Two Systems” with a large degree of autonomy from China. That freedom has largely vanished in recent months with the passage of a “national security” law in Beijing’s National People’s Congress allowing Chinese authorities to prosecute Hong Kong dissidents and extradite them to China. Under “One Country, Two Systems,” laws passed by the National People’s Congress are not applicable in Hong Kong, a fact that has not stopped pro-China Hong Kong authorities from imposing it.

Despite over a year of consistent and massive protests, the Chinese grip on Hong Kong remains firm and authorities arrest protesters en masse. With the national security law in place and the indefinite suspension of local elections, Hong Kong’s autonomy is effectively moribund.

China, for its part, insists the revocation of Hong Kong’s autonomy remains in line with the “One Country, Two Systems” premise and represents an improvement on the arrangement. Zhao stressed that China remained committed to the arrangement:

We have stated China’s solemn position on the relevant issue on many occasions. Today I would like to say a few more words regarding this. The NPC Standing Committee’s decision on the eligibility of the HKSAR [Hong Kong Special Autonomous Region] Legislative Council’s members in accordance with the relevant provisions of  the Constitution, the Basic Law and the Hong Kong-related national security law is an inherent requirement of upholding and improving the system of “one country, two systems” and a necessary step to maintain the rule of law and constitutional order in the HKSAR. This is legal, reasonable and unchallengeable.

Zhao further noted that most countries expect civil servants to uphold existing law and pledge loyalty to the nation: “Civil servants must uphold their country’s constitutional laws and honor the pledge of allegiance to the motherland, which is the basic political ethics in all countries, right?”