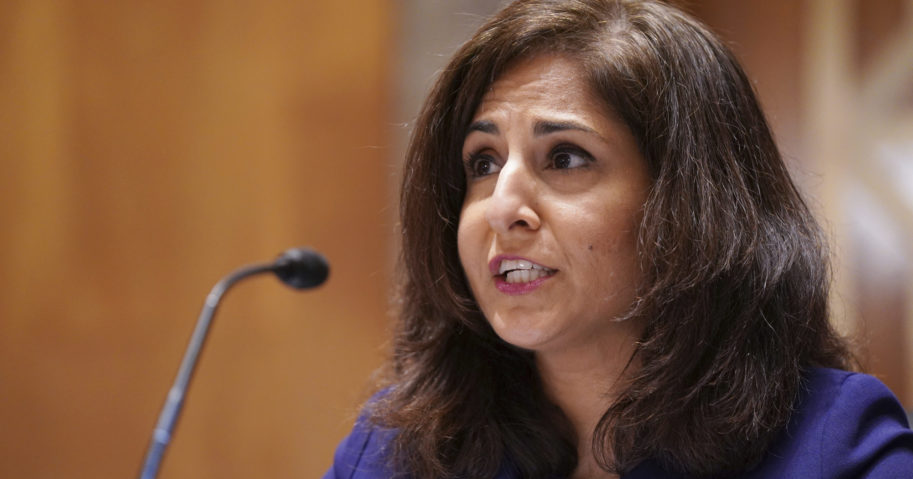 Leigh Vogel / Pool / APNeera Tanden testifies before the Senate Homeland Security and Government Affairs Committee on her nomination to become the director of the Office of Management and Budget during a hearing on Feb. 9, 2021, on Capitol Hill in Washington, D.C. (Leigh Vogel / Pool / AP)

President Joe Biden’s choice to the lead the Office of Management and Budget apologized Tuesday for spending years attacking top Republicans on social media as she tried to convince senators she’ll leave partisan politics behind if confirmed.

Neera Tanden also admitted to spending “many months” removing past Twitter posts, saying, “I deleted tweets because I regretted them.” But she refused to say she did so to help her nomination.

“I know there have been some concerns about some of my past language on social media, and I regret that language and take responsibility for it,” Tanden, a former adviser to Hillary Clinton and the president of the Center for American Progress, told a Senate committee.

She later added, “I deeply regret and apologize for my language.”

Tanden’s nomination requires approval from the Senate, which has moved fairly quickly to confirm many of Biden’s picks for powerful posts.

Democrats hold the majority thanks to the tie-breaking vote of Vice President Kamala Harris. None in the party have yet opposed Tanden, meaning she’s likely to ultimately be approved.

But the confirmation process could turn into a political battle, given her history of attacking GOP lawmakers she’d now have to work with.

Republican Ohio Sen. Rob Portman noted that, despite going back and trying “to cover what you said” by deleting tweets, copious “harsh criticism” and “personal attacks about specific senators” endured.

He said that included Tanden calling Arkansas Republican Sen. Tom Cotton “a fraud” and tweeting that “vampires have more heart” than Sen. Ted Cruz of Texas.

Do you think Tanden should be confirmed?

Oklahoma Republican Sen. James Lankford said Tanden had tweeted more over the past four years than even President Donald Trump did.

“Something that this committee’s asked pretty frequently of nominees is, ‘Will you commit to working across the aisle?’” Lankford said. “And that’s one that we have to ask you a little more blunt than others because it’s been pretty clear that hasn’t been your position in the past.”

Tanden said she recognizes “that this role is a bipartisan role, and I know I have to earn the trust of senators across the board.”

White House press secretary Jen Psaki said Tuesday that Biden remains confident Tanden will be confirmed, and that no one in the administration directed her to apologize.

“We certainly did not ask her to make any specific comments in her testimony,” Psaki said.

Tanden said that she’d use the post of budget chief to “vigorously enforce my ironclad belief that our government should serve all Americans, regardless of party, in every corner of the country.”

Missouri Sen. Josh Hawley offered another potential line of criticism on Tuesday, noting that the Center for American Progress had collected large donations from Wall Street firms and groups associated with major tech firms while Tanden headed it.