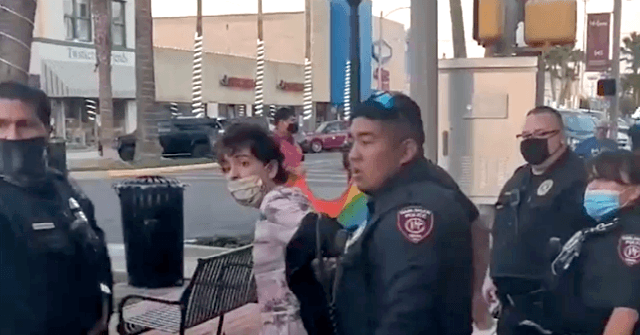 The incident took place on Saturday in Harlingen when Trump supporters gathered for a prayer meeting in the city’s downtown area, information released by the local police department revealed.

On 11/07/2020 at approximately 5:27PM Harlingen Police Officers responded to the area of N A St and W Jackson Ave in…

The group was holding their meeting when 20-year-old John Rivas arrived with two other women and he began throwing eggs, a statement by Harlingen Police revealed. When the Trump supporters asked him to leave, Rivas “displayed a knife” and then left the area before police arrived. Authorities located Rivas shortly after and tried to arrest him, but the teen apparently resisted for a short period. Authorities say they found a serrated kitchen knife. Police charged Rivas with one count of aggravated assault with a deadly weapon, one count of resisting arrest, and one misdemeanor count of disruption of a meeting.

A local resident posted on Facebook the moment when Rivas appears to struggle with police. One of the female suspects can be heard threatening to spit on the face of a man who tried to help police during the arrest.