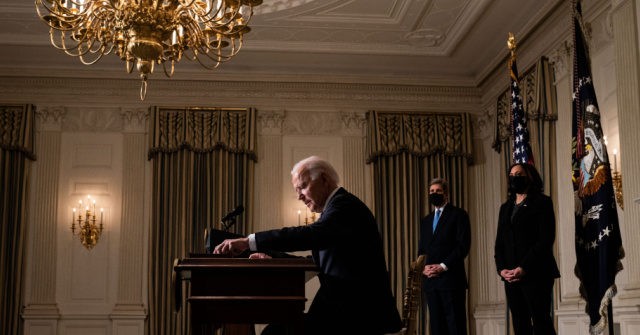 President Joe Biden’s abolishment of key migration controls during his first three weeks in office is receiving the most pushback from voters.

The latest Morning Consult poll — which surveyed nearly 2,000 registered voters and was conducted between February 5 and 7 with a margin of error of +/-2 percentage points — found that of the 28 executive orders signed by Biden at the time, voters least supported his revoking of controls at the United States-Mexico border and expansion of legal immigration levels.

The most unpopular order, Biden’s plan to increase refugee resettlement by 960 percent next year, is opposed by about 48 percent of voters and is supported by less than 4-in-10 voters. Roughly 52 percent of swing voters oppose the increase, as well as 76 percent of Republicans and even 24 percent of Democrats.

Likewise, Biden’s order that will count illegal aliens in the U.S. Census for the purpose of determining how many congressional seats each state receives is his second most unpopular. About 42 percent of voters said they oppose the order and 45 percent said they support it.

New from me: @MorningConsult has polled 28 executive actions issued by @POTUS since Jan. 20.

His move to expand the refugee cap is the first one that is actually unpopular: 39% support it and 48% oppose it.https://t.co/pwfZKkXQ3t pic.twitter.com/yr8wPKG6jY

More than half of Biden’s most unpopular executive orders also include his suspension of the anti-fraud Remain in Mexico policy, which kept migrants in Mexico while they awaited their asylum hearings, the restart of immigration from terrorist-exporting countries, a halt on the construction of the border wall, and his ordering a review of immigration rules that protect taxpayers from having to foot the bill for social services for legal immigrants seeking green cards.

Each of the orders has less than half of voter support, except Biden’s halt to border wall construction, which 51 percent of voters said they support.

A weekly survey by Rasmussen Reports shows a major uptick in support for migration controls — that is, less legal immigration and stricter guidelines tackling illegal immigration — while more than 17 million Americans remain jobless.

The survey finds that “voters are looking for tighter immigration control from the incoming Biden administration.” The survey, which has been conducted every week since December 2019, indicates that now more than any time over the last two years, voters are the most supportive of decreasing overall immigration.

For instance, more than 70 percent said employers must be banned from hiring illegal aliens over Americans, 53 percent oppose amnesty for the illegal alien population of 11 to 22 million, 74 percent want legal immigration levels reduced to zero to one million annual admissions, and 61 percent said the U.S. does not need more H-1B foreign visa workers.

John Binder is a reporter for Breitbart News. Email him at [email protected] Follow him on Twitter here.