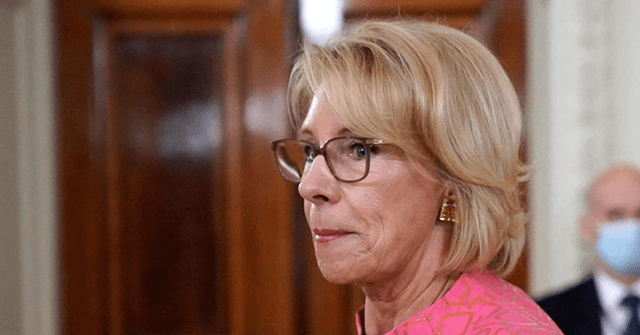 The national teachers’ unions are gleeful that a number of media outlets have called the presidential election for former Vice President Joe Biden.

“We know Joe Biden and Kamala Harris will stand with us as we work to reclaim public education as a common good, as the foundation of this democracy,” National Education Association (NEA) President Becky Pringle said in a video message.

Pringle said she is especially looking forward to the exit of current Secretary of Education Betsy DeVos, a champion of school choice:

Step one will be to replace Betsy DeVos with an education secretary who will understand and value and protect public education and respect the voices and professional expertise of educators. NEA’s vision for public education is to transform it into a racially and socially just and equitable system that’s actually designed to prepare every student, everyone, to succeed in a diverse and interdependent world.

Because of you all, we’ll soon have a president committed to protecting and uplifting our communities. For the first time, the Vice President will be a Black woman and a daughter of immigrants. pic.twitter.com/rquH3FMYuR

Over the last four years, NEA members have taken heroic action to stand up for their students, their profession, and their communities. Millions of educators rallied under the #RedForEd banner for school funding and educator pay equity, denounced the confirmation of Betsy DeVos as secretary of education, and volunteered for pro-public education candidates. Thousands of educators ran for office and won in the 2018 midterm elections.

“Public education is not at your mercy any longer,” she said.

Adios Betsy. public education is not at your mercy any longer. @AFTMass @AFTunion pic.twitter.com/IdoiyHmwMX

Amazing to see my sister @psc_cuny principal officers! What better than to be marching together w/so many members celebrating the defeat of fascist racist POTUS. pic.twitter.com/d9uXolonVz

Randi Weingarten, president of AFT, said Biden and Harris were “elected by more voters than any ticket in history.”

“Under immense pressure, our democracy worked,” she said. “The American people had their voices heard and their votes counted, and their will was clear and decisive.”

Obama and Duncan orchestrated the Common Core State Standards for K-12 public schools, though teachers’ unions resisted their use because they required teacher evaluations based, in part, on student achievement on aligned tests.

WE MARCH because Trump has indicated he will do anything to stay in power, including refusing to leave office #DemandDemocracy #CountEveryVote #DefendEachOther pic.twitter.com/TANwuRlnUh

The Trump campaign is challenging the election results in a number of states.