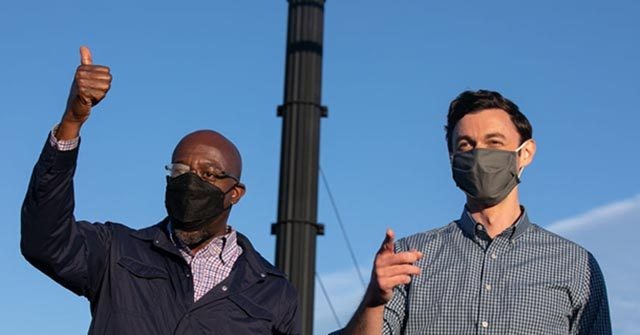 Outside influence in state elections is reaching new heights over two contested Senate seats in Georgia as left-wing Californians make plans to move to the state to cast their votes for Democrats Jon Ossoff and the Rev. Raphael Warnock.

The men are hoping to unseat Sens. David Perdue and Kelly Loeffler in the January 5 runoff election.

The San Francisco Chronicle reported on some of those Californians who want to pour more than money into the runoff contest:

Joseph Killian and his friends donated a collective $50,000 to a dozen Democratic Senate candidates this fall, and most of them lost. Now, with the Senate and Joe Biden’s agenda on the line, the San Francisco resident wants to move to Georgia to volunteer for the two Democrats running to unseat a pair of Republicans in January.

Many, like Killian, want to be a part of the grassroots network of organizations created by former Democratic gubernatorial candidate Stacey Abrams. It registered more than 800,000 Georgians to vote this year.

Winning a Senate seat in the state would also be a major accomplishment for Democrats — they haven’t done that since 2000. Turnout typically drops off precipitously in runoff elections, and Democrats tend to shed more voters than Republicans.

“I can’t just sit home and raise money,” Killian, 38, a project manager for a tech company, said in the Chronicle report. “When you look at some of those races where (we donated and) we didn’t win, this is our chance to hopefully go there and fix that. We want to be there and help.”

“I’m most in awe of Stacey Abrams,” Killian said. “I have been paying attention to what she committed to do in Georgia and what it has become.”

“My phone has been blowing up every 20 minutes,” Manny Yekutiel, owner of Manny’s, a civic engagement space in San Francisco’s Mission District, said in the report. “People are asking me, ‘When do I move to Georgia? Where can I stay? Should I get a block of hotel rooms?’”

But as Breitbart News reported, the leftists’ plan may come up against Georgia state law:

Democrats are suggesting that out-of-state Democrats temporarily move to Georgia for the sole purpose of helping to beat Senators Kelly Loeffler (R-GA) and David Perdue (R-GA) in their runoff elections against Democrats Jon Ossoff and Raphael Warnock on January 5.

In a November 6 [Twitter] post, Democrat Andrew Yang suggested that Democrats from out of state “get ready to head to Georgia” to “give Joe [Biden] a unified government.”

“There isn’t much time. The earliest date for absentee ballots to be mailed for the runoff is Nov. 18,” Yang said. “The registration deadline is Dec. 7. The In-person early voting begins Dec. 14.”

The best thing we could do for Joe is to get him a Democratic Senate. There should be coordination of resources. Everyone who campaigned for Joe should get ready to head to Georgia. I’ll go. It’s the only way to sideline Mitch and give Joe a unified government.

Likewise, New York Times columnist Tom Friedman told CNN that he hopes “everybody moves to Georgia in the next month or two, registers to vote, and votes for these two Democratic senators.”

However, it is illegal — a felony, in fact — to move to Georgia solely with the intention of voting rather than to establish a permanent residence.

Moreover, as a source within the Georgia state government told Breitbart News, it is also illegal to vote in a Georgia runoff if you have already voted in a Senate race in the general election in another state.

But even without those who want to move, Georgia Democrats are attracting outside money.

“Nearly 80 percent of the money raised in the fall campaign for Warnock, the Democrat running against Loeffler, came from outside Georgia. More than 83 percent of Ossoff’s funding for his race against GOP Sen. Perdue came from outside the state,” the Chronicle reported. “San Francisco was the No. 3 metro area in the county for donations for both Democrats.”

Yekutiel held a fundraiser for both the Democrats, and some 3,000 people showed up to hear him talk with the candidates. Another fundraiser featuring the candidates and Abrams is planned where the top ticket costs $15,600, the Chronicle reported.

“Insiders expect $150 million to $200 million to be spent on the runoffs,” the report said. “And if the race follows the path of what happened in the general election, much of that money will come from outside Georgia.”