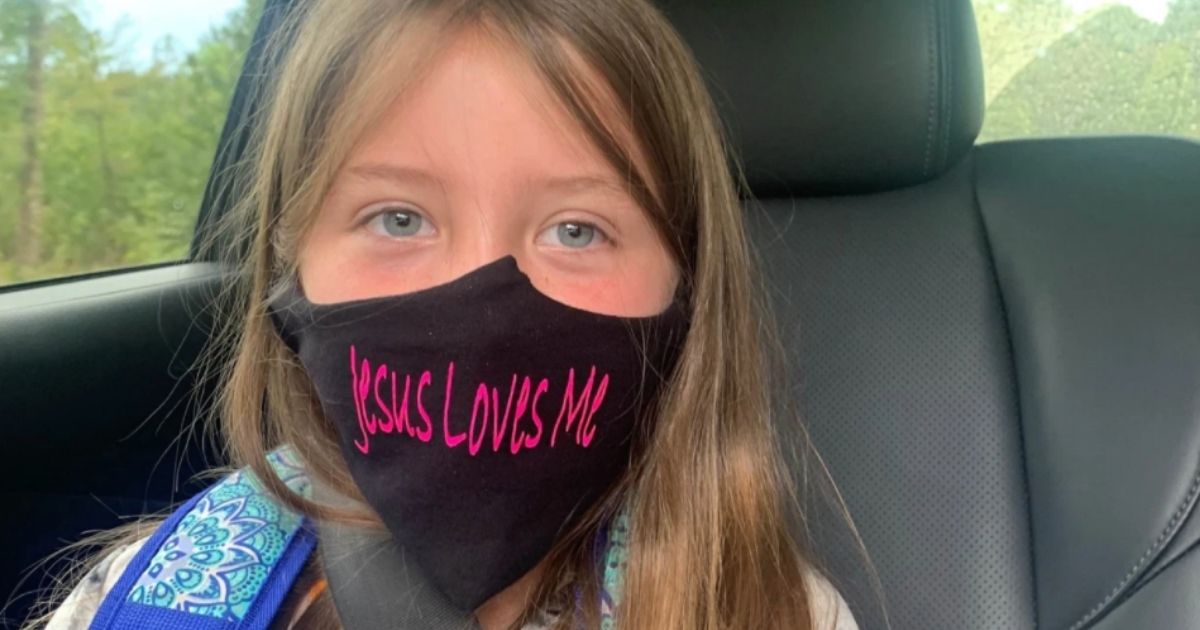 Mask mandates intended to protect school children against COVID-19  already are controversial, but Mississippi’s Simpson County School District is facing a federal lawsuit after a student was told she couldn’t wear her face covering that was emblazoned with the phrase “Jesus Loves Me.”

In an apparent case of censorship against the Christian message, third-grader Lydia Booth, 9, was wearing the mask at school in October when the principal told her she needed to take it off, according to a news release from Alliance Defending Freedom, the Christian nonprofit whose attorneys are representing the student and her family in the lawsuit, which was filed Monday.

Just days after she was told she couldn’t wear her mask with a religious message, the school district issued a statement saying it prohibited masks that displayed “political, religious, sexual or any inappropriate symbols, gestures or statements that may be offensive, disruptive or deemed distractive to the school environment.”

However, that policy was not in the Simpson Central Elementary School’s handbook, the student’s mother pointed out, adding that she told school officials her daughter was protected by the Mississippi Student Religious Freedom Act and the First Amendment.

After repeated attempts to rectify the situation with the school administration, Jennifer Booth teamed with the Alliance Defending Freedom group to file the suit on behalf of Jennifer’s daughter.

“Public schools have a duty to respect the free expression of students that the First Amendment guarantees to them,” ADF Legal Counsel  Michael Ross said in the news release.

“While school administrators face challenges in helping students navigate school life during a pandemic, those officials simply can’t suspend the First Amendment or arbitrarily pick and choose the messages that students can or can’t express,” he said.

Should students be allowed to wear masks with religious messages at public schools?

“Other students within the school district have freely worn masks with the logos of local sports teams or even the words ‘Black Lives Matter.’ This student deserves an equal opportunity to peacefully express her beliefs,” Ross noted.

If it’s true that other children were permitted to wear the message of an anti-police, Marxist, sometimes violent organization, there should be no qualms about a religious message.

Far from being “offensive, disruptive or distractive,” there is a sweet simplicity in the phrase “Jesus Loves Me.”

“Defendants’ censorship of L.B.’s religious message, and the Religious Speech Policy and practice on which that censorship was based, violate the First and Fourteenth Amendments to the United States Constitution,” the legal complaint asserted.

In a sane world, there is nothing offensive about “Jesus Loves Me,” and there certainly is no way a school could restrict a student from expressing her religious beliefs. (In a sane world, they might rethink making children wear masks all day given that the virus isn’t as dangerous to kids.)

RELATED: School District Tries To Get Away with Silencing Pro-Trump Student, Federal Judge Steps In

However, there is an increasing anti-Christian bias in the United States, and this student was just the next to become singled out for her belief in the same faith the country was founded upon.

Users on Twitter expressed similar incredulity and outrage at a child being told she couldn’t wear the mask because of its religious message, and they pointed out the hypocrisy of school officials.

If others have done it in promoting other beliefs r causes the precedent was set. Be fair. Be consistent. Agree hold them accountable.

If it had said Black Lives Matter, they would have left her alone.

If it had said Black Lives Matter, they would have left her alone.

Would they ask a Muslim or Buddhist to do the same? Is it equally applied as a policy?

Schools should be allowed to have rules such as a dress code or prohibition of certain messages, of course, but when applied unfairly based on subject matter, rules become biased censorship rather than earnest concern for the school environment.

Many mistakenly claim that so-called “separation of church and state” means that anyone in a public school is not able to express his or her religious faith.

Not so: The Founding Fathers intended for the state to stay out of religion, not banish it from the public square.

Buried in this issue is the sad reality that kids are sitting in classrooms, distanced from their peers and forced to wear cloth on their faces all day.

Can’t they at least spread personally meaningful, constitutionally protected messages while doing it?