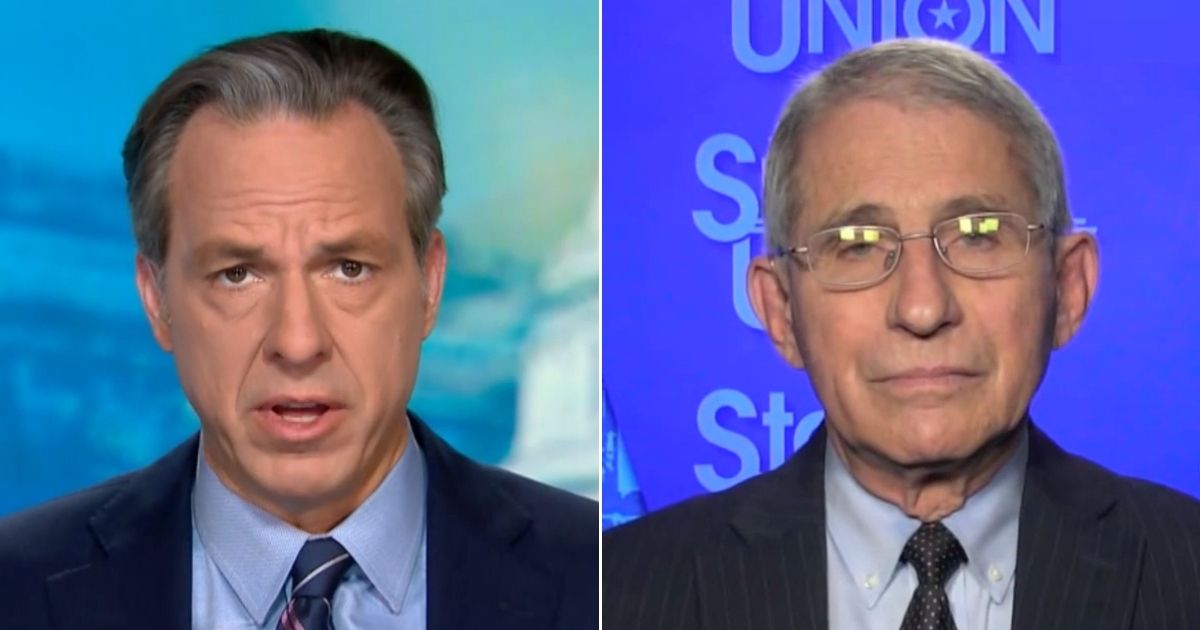 As long as we’re canceling Thanksgiving, why don’t we get an early start on Christmas, too?

In an appearance on CNN’s “State of the Union” on Sunday, host Jake Tapper and Dr. Anthony Fauci, director of the National Institute of Allergy and Infectious Diseases, were discussing a return to normality in the midst of COVID-19 — in particular the role a vaccine would play in getting us there.

In the midst of the conversation, Tapper intimated that Dec. 25 might just be a Friday with presents for us this year.

“Now, you have already encouraged Americans to consider canceling any Thanksgiving plans that involve visiting with somebody else or having visitors come,” the CNN host said.

“I know a lot of Americans are looking ahead, hoping to make plans for other holidays, such as Christmas. But when do you think Americans will next be able to safely gather together for family events like this? Are you suggesting it probably won’t be able to happen until, I don’t know, Labor Day 2021, Thanksgiving 2021?”

Whether the nation’s most powerful epidemiologist realized it wasn’t good PR or got the impression that Tapper was trying to draw him into uttering a pull quote CNN could splash across the front page of its website (“Fauci: Christmas Cannot Happen, Easter Unlikely Too”), he steered it back to whether a vaccine could get us to “approach a degree of normality” in typically Faucian language.

Fauci said the “first [vaccine] that came out was highly effective. I anticipate that the second one likely will be comparable. You never can tell until you see the data, but would be comparable.” He went on to add it depended on people getting the vaccine and  “still doing some fundamental public health things that synergize” with the vaccine.

However, Fauci still said we would only “start getting things back to relative normal as we get into the second and third quarter of the year, where people can start thinking about doing things that were too dangerous just months ago.”

“So, not until the second or third quarter of 2021, though? Christmas is probably not going to be possible?” Tapper said.

Should Christmas celebrations be tightly controlled by state and local governments?

Again, hemming on whether Christmas is canceled: “Yes, I’m — well, I think that, if we get most of the country vaccinated in the second, third quarter of the year, and the vaccine continues to prove its efficacy, and people adhere to those fundamental measures, I think we can start approaching the degree — it’s not going to be a light switch, Jake,” Fauci said.

“We are not going to turn it on and off, going from where we are to completely normal. It’s going to be a gradual accrual of more normality as the weeks and the months go by, as we get well into 2021.”

CNN’s Jake Tapper this morning: “Christmas is probably not gonna be possible.” pic.twitter.com/z56ifNCr3G

As for Fauci, it’s rare that he takes some credit for realistic thinking on risk mitigation, but he said during a Yahoo Q&A in October that every “individual family needs to make the decision based upon the risk situation in your own family” and that while “we need to realize things might be different this year, particularly if you want to have people who are going to be flying in from a place that has a lot of infection,” the holidays were still “a beautiful tradition of getting family together.”

Fauci is usually a man given to tone-deaf, backfiring paternalism such as his Thursday statement that, despite America’s “independent spirit … now is the time to do what you’re told.”

When even he is striking a more realistic tone than some of our politicians — or Jake Tapper, for that matter — perhaps they ought to evaluate the usefulness of rhetoric and regulations designed to snuff out human impulses in order to snuff out the pandemic.

Lest we forget, for the better part of the first two weeks of the month, we’ve seen a whole host of politicians instituting policies essentially barring families from having Thanksgiving together, whether through travel bans or caps on gathering sizes or the number of households that can meet for the holiday.

How will this end?

Consider the ability of these politicians to abide by their own rules. On Friday, California issued guidelines that barred over half the people in the state from having indoor gatherings and mandated that only three households be present and that members of different households sit 6 feet apart. The state has also implored residents to refrain from nonessential travel.

This was shortly after news broke that California Democratic Gov. Gavin Newsom had attended a birthday party with more than three households at an exclusive restaurant.

This happened at a restaurant, making it technically legal, if inadvisable.

It also happened in Napa Valley, a roughly one-hour drive from the state capital of Sacramento. Generally speaking, travel to a Michelin-starred restaurant for an adviser’s birthday party falls under the aegis of nonessential.

In Chicago, Mayor Lori Lightfoot’s administration announced a more stringent advisory, telling the city’s residents they “must cancel the normal Thanksgiving plans … [p]articularly if they include guests that do not live in your immediate household.”

Chicagoans were also admonished not to have guests over, and gatherings of more than 10, both indoors and outdoors, have been prohibited, according to WMAQ-TV.

Curious, because this was Lightfoot just days before, in the midst of celebrations after many establishment media outlets declared Democrat Joe Biden the winner of the presidential election:

It’s not just the hypocrisy of the “rules for thee, not for me” mentality. It’s the idea that all agency must be stripped from us by our betters, even as they — knowing full well what they’re demanding of the plebes — indulge in basic human impulses of attachment, fellowship and celebration, having made a calculated risk-reward decision in the matter.

When you take away that agency, you don’t get compliance, though. What you get is this:

In March we were told “2 weeks to flatten the curve.” That was 8 months ago.

Screw this authoritarian lunatics. They only have power if we give it to them.

Maybe for you, Jake. I’ll be having Christmas with my family, using common sense measures, because this is America, and no Democrat mayor or governor is going to dictate to me what to do in my own home. @jaketapper @GavinNewsom @ericgarcetti #COVID #Lockdown2 #Freedom https://t.co/K7GwrZ6qt4

And before you make this argument about Tapper’s remark — it was seen not infrequently on Twitter, here expressed by Republican-ish pollster Frank Luntz — just be forewarned that it’s wrong:

In this clip, @JakeTapper is referring to whether a COVID vaccine will be available by Christmas.@SteveGuest is counting on you to read his tweet but not watch the video. https://t.co/vBpXZvWgW6

Except he’s not. In the fuller context of the conversation, it’s clear Tapper is talking about “when … Americans will next be able to safely gather together for family events like this,” not when the vaccine will be available. Frank Luntz apparently didn’t bother going to CNN’s website to watch the interview before attempting to own Steve Guest.

Tapper himself said he wasn’t making a statement, he was just asking a question:

Yeah, @SteveGuest is characteristically misrepresenting the conversation. It was a question about family gatherings. pic.twitter.com/kLYUvvUEXN

There is no Christmas “comment.” It’s a *question* about the safety of family celebrations. I’m no health expert, I ask questions of them. pic.twitter.com/X6UYM3l7Fc

It’s not often I get to say this, but Fauci was right — at least in October: “Each individual family needs to make the decision based upon the risk situation in your own family.”

Jake Tapper doesn’t have the ability to cancel Christmas, thank heavens. There are plenty of people who believe they do and have their hands on the levers of public policy, however. Those levers do not and have never controlled human instinct, a fact which will become messily clear if this is how officialdom plans to superintend the holidays.