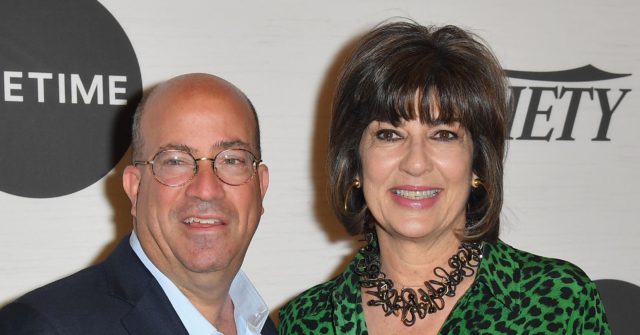 CNN’s Christiane Amanpour has apologized for comparing President Donald Trump’s tenure to Nazi Germany on the recent anniversary of Kristallnacht, the 1938 pogrom that is often regarded as the starting date for the Holocaust.

This week 82 years ago, Kristallnacht happened. It was the Nazis’ warning shot across the bow of our human civilization that led to genocide against a whole identity, and in that tower of burning books, it led to an attack on fact, knowledge, history and truth. After four years of a modern-day assault on those same values by Donald Trump, the Biden-Harris team pledges a return to norms, including the truth.

Critics (see below) slammed her commentary as inflammatory and insensitive to the victims of the Holocaust.

As Breitbart News’s Deborah Danan noted, the State of Israel formally demanded an apology from Amanpour:

“The use of the 82nd anniversary of Kristallnacht by Amanpour for the purpose of this comparison is an affront to the memory of the Holocaust, those who perished and those who suffered through these unimaginable atrocities,” she wrote. The consulate said it was “sincerely disappointed” by the way Amanpour chose to express herself and urged the anchorwoman and her employer to publish an apology.

On Monday, Amanpour apologized on the air:

“I shouldn’t have juxtaposed the two thoughts; Hitler and his evil stand alone, of course, in history. I regret any pain my statement may have caused.” @camanpour pic.twitter.com/zzp371tU9C

After the apology, some viewers took to Twitter to express their satisfaction.

“Finally, CNN’s Christiane Amanpour apologizes for her Holocaust comparison,” tweeted Michael Dickson, Executive Director of StandWithUs in Israel. “She should have known better.”

Finally, CNN’s Christiane Amanpour apologizes for her Holocaust comparison. She should have known better. She states: “Hitler and his evils stand alone, of course, in history.” Too many are too quick to minimize the Holocaust with insensitive comparisons.https://t.co/OKoI9KmaWI

Welcome apology, though Amanpour's new rationale for her framing makes no sense. German democracy had “slipped away” long before Kristallnacht.https://t.co/w4jT5AOrXm pic.twitter.com/wf3SEtZnVl

But not everyone was impressed.

“It’s about time. But, it shouldn’t take her being raked over the coals on twitter, and condemned by major Jewish groups.. to issue an apology,” wrote news anchor Eric Landskroner. “It was a comparison and effort to present a moral equivalency, that NEVER should have been made.”

“Amanpour keeps diminishing the Holocaust,” wrote one Twitter user. “I’m not sure an apology this time will stop her the next time.”

“Sure, just another ‘I’m sorry you feel that way’ non apology from @camanpour,” tweeted another user.

“We the people don’t accept her apology. Too little too late,” tweeted another. “Think before you speak.”

“Never mind apologizing ⁦@CNN⁩, ⁦@camanpour should be fired!” wrote yet another.

In the opening of her daily global affairs interview program on Thursday, Amanpour dedicated her introduction to commemorating Kristallnacht (or “Night of Broken Glass”), which occurred last week in 1938.

Flashing scenes of Jewish victims followed by the Nazi burning of Jewish books, Amanpour then continued by comparing the forces behind the notorious historical event with the current U.S. administration.

The backlash was immediate.

“Ms. Amanpour wouldn’t know the truth if it wrapped itself along with her scarf around her neck!” said former Fox News Channel host Bill O’Reilly.

.@BillOReilly calls out @camanpour for invoking “Kristallnacht” and comparing the Trump Administration to Hitler's Germany.

“Ms. Amanpour wouldn't know the truth if it wrapped itself along with her scarf around her neck!” pic.twitter.com/SRcFZ7rSRU

Israel’s Diaspora Affairs Minister Omer Yankelevitch said on Sunday that the US news network “should be a partner in the global effort to fight antisemitism and not fuel the fire.”

“Using the memory of the Holocaust for cheap headlines or a political agenda is concerning and distorts the historical and moral truth,” he said.

“The foolish comparison Amanpour made between Kristallnacht and Trump must bring about her immediate dismissal from CNN,” wrote former Israeli consul-general in New York Danny Dayan. “There is no immunity for Holocaust deniers.”

“Never before in the history of U.S. news networks did a journalist distort the Holocaust for political purposes as Amanpour just did on on CNN & PBS,” wrote Hillel Neuer, Executive Director of UN Watch. “No, @camanpour, the Nazi genocide was not ‘an attack on fact, knowledge, history & truth.’ They murdered 6 million Jews. Say it.”

Never before in the history of U.S. news networks did a journalist distort the Holocaust for political purposes as Amanpour just did on on CNN & PBS.

No, @camanpour, the Nazi genocide was not “an attack on fact, knowledge, history & truth.“

“Odd that Christiane Amanpour, who has a long history of making antisemitic remarks, would dare label anyone a Nazi,” wrote investigative journalist Mark Hyman, followed by a link to collection of CAMERA essays detailing Amanpour’s history of antisemitic statements.

ZOA appreciates AJC’s David Harris letter condemning CNNs @camanpour for comparing Nazis to Trump and her not mentioning that Jews were the targets of Kristalnacht. An apology though is not enough. Amanpour’s history of anti Israel propaganda is long and ugly. CNN must fire her. https://t.co/7iN6sIGHmv

Israeli Consul-General in Atlanta Anat Sultan-Dadon penned a letter to CNN executive vice president Rick Davis, obtained by The Jerusalem Post, expressing outrage at Amanpour’s use of the Holocaust for political means, saying it disrespects the victims.

Even the more liberal B’nai Brith International expressed its “dismay” at the “outrageous and deeply offensive” remarks.

We are dismayed by comments made recently by @CNN Chief Int'l Anchor Christiane Amanpour regarding Kristallnacht. Amanpour marked the 82nd anniversary of Kristallnacht by likening the acts of the Nazis to those of President Trump.

In a mild and indirect rebuke, the Anti-Defamation League (ADL) tweeted as follows:

“As we’ve said many times before, there’s no analogue between the Holocaust & what’s taking place in the U.S. Pundits & politicians should avoid such facile comparisons. They are offensive & insensitive to the memory of the #Shoah.”

As we’ve said many times before, there’s no analogue between the Holocaust & what’s taking place in the U.S.
Pundits & politicians should avoid such facile comparisons. They are offensive & insensitive to the memory of the #Shoah. https://t.co/JLMKVmiRl3

Amanpour is the Chief International Anchor for CNN and host of CNN International’s nightly interview program Amanpour, which has aired for nearly a decade.

In April last year, Amanpour suggested that “lock her up” chants were a form of hate speech that the FBI could have “shut down.”

Amanpour’s latest comments not only grossly misinform but drastically belittle the horrors of the past.

The U.S. Holocaust Memorial Museum describes the period following the night that violent anti-Jewish demonstrations broke out across Germany, Austria, and the Sudetenland region of Czechoslovakia:

Over the next 48 hours, violent mobs, spurred by antisemitic exhortations from Nazi officials, destroyed hundreds of synagogues, burning or desecrating Jewish religious artifacts along the way. Acting on orders from Gestapo headquarters, police officers and firefighters did nothing to prevent the destruction. All told, approximately 7,500 Jewish-owned businesses, homes, and schools were plundered, and 91 Jews were murdered. An additional 30,000 Jewish men were arrested and sent to concentration camps. Nazi officials immediately claimed that the Jews themselves were to blame for the riots, and a fine of one billion reichsmarks (about $400 million at 1938 rates) was imposed on the German Jewish community.

The greater significance of the event is also noted.

“Kristallnacht was a turning point in the history of the Third Reich, marking the shift from antisemitic rhetoric and legislation to the violent, aggressive anti-Jewish measures that would culminate with the Holocaust.