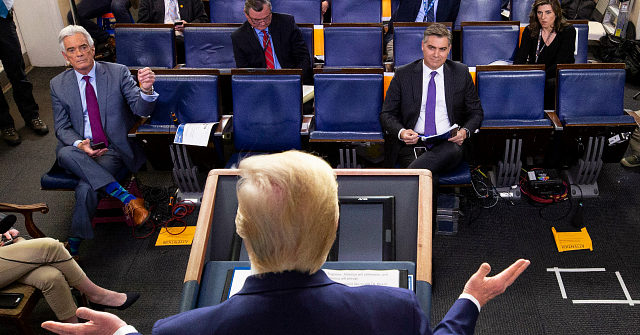 CNN chief White House correspondent Jim Acosta asked President Trump after a press conference at the White House Thursday if he was “being a sore loser.”

As the president wrapped up his remarks about the election and turned to leave the room, Acosta posed the question to which Trump did not reply:

“Are you being a sore loser?” — @Acosta asks Trump as he exits.
(Note: Trump’s exit is the only clip of that lie-filled speech we will tweet.) pic.twitter.com/MS8TdICwZM

Moments before, the president recalled saying that “mail-in ballots are going to end up being a disaster,” adding that it was “getting worse and worse every day”:

We’re hearing stories that are horror stories, absolute horror stories. And we can’t let that happen to the United States of America. It’s not a question of who wins–Republican, Democrat, Joe, myself. We can’t let that happen to our country. We can’t be disgraced by having something like this happen. So it will be hopefully cleared up, maybe soon. I hope soon. But it’ll probably go through a process, a legal process. And as you know, I’ve claimed certain states, and he’s claiming states, so we can both claim the states, but, ultimately, I have a feeling judges are going to have to rule.

“But there’s been a lot of shenanigans, and we can’t stand for that in our country,” he concluded.

As Trump explained his view of the election results, three major networks–ABC, CBS, and NBC–all cut away from the live press briefing, according to Breitbart News.

“MSNBC cut away — followed by the three ‘alphabet’ networks,” the report said:

As of Thursday evening, President Trump and former Vice President Joe Biden (D) are still in a fight for Pennsylvania, North Carolina, Georgia, Arizona, and Nevada, according to Breitbart News’s live updates.

Someone Took a Tally During Massive Cleanup of Los Angeles Park,...