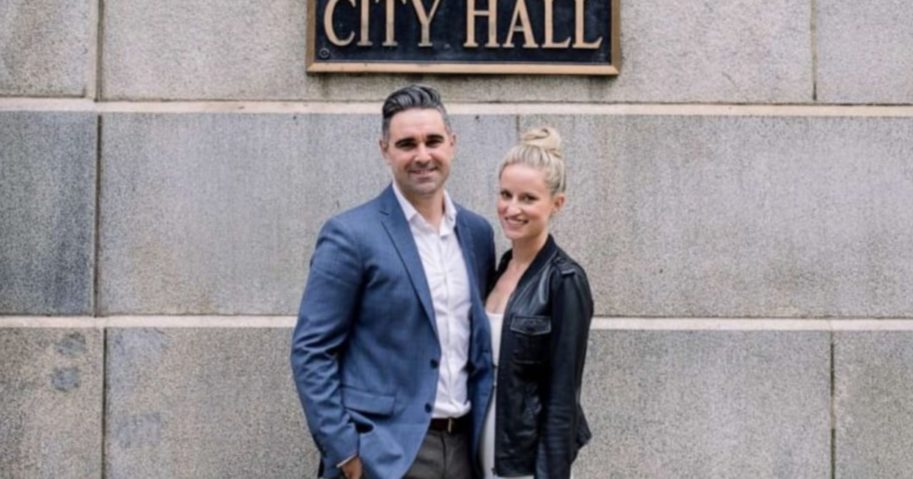 This year has thrown many couples for a loop. Those who had planned to tie the knot this year had no idea what they were in for, and many have had to postpone their big day.

But now we’re coming to the time that many brides and grooms-to-be had selected as their postponed date, and restrictions and regulations are still alive and well, causing many to despair, put off the nuptials indefinitely or make the best of what they have and reimagine their wedding.

Emily Bugg and Billy Lewis met on Bumble in 2017, were engaged in July 2019 and planned to have a wedding with 150 of their closest friends and family in Chicago this year.

Then COVID hit. They reduced their guest list to 50, then changed the date, and then canceled it altogether when their Thanksgiving weekend wedding plans were foiled by the pandemic.

Instead, the couple used their loss to help those in need. They got married at Chicago city hall and then fed 200 people.

“So many people have told me this was a beautiful way to start our married life together,” Emily told The Washington Post.

Emily had already bought her dress. They’d already put a deposit down on the venue and catering and paid the DJ. Much of that money was gone — but then she had an idea.

Emily is an outreach worker with “Thresholds,” which offers services like mobile medication vans and other resources for those with substance abuse disorders and mental illnesses.

The organization was suffering with low donations thanks to the havoc caused by the year, so Emily asked Big Delicious Planet, the catering service they’d chosen, if she could put the $5,000 deposit toward a Thanksgiving meal for clients at Thresholds.

With Thresholds also on board, the catering company cooked up 200 dinners that included Thanksgiving staples like turkey, dressing, mashed potatoes and green beans.

“This just seemed like a good way to make the best of a bad situation,” Emily said.

“We had come to a place where we had some big decisions to make,” Lewis added.

“We decided to just go ahead and get on with our lives.”

“And I’m lucky to have a wife who is clever and thoughtful enough to change a not-so-good situation into something positive for a lot of people,” he said.

“Emily & Billy, one of our couples whose wedding we were to cater in October, told Grace Hamilton, BDP’s Director of Weddings & Events, they wanted to cancel their wedding, but asked if they could repurpose their wedding deposit to meals for a non-profit,” Big Delicious Planet shared on Instagram. “We thought it was such a nice idea, and agreed to make Thanksgiving meals for @thresholdschicago.”

“I’m happy this story was picked up, because in times like this, we can all use a feel good story. Thanks to Emily and Billy for being so generous!”

CEO of Thresholds, Mark Ishaug, believes that others will see Emily and Billy’s generous move and that it will get them thinking about what they can do to help.

“Emily’s donation is an incredible example of the generosity and creativity that the pandemic has inspired in so many,” he said, according to KSAZ-TV.

“Other people start asking themselves, ‘What can I do for others at Thanksgiving?’ There’s been so much anger and fear this past year … and then we have something like this from Emily and Billy, which is just about humanity and kindness.”

The bride and groom seem pretty happy with their choices, too.

“In the grand scheme of things, canceling a big wedding isn’t the worst thing that could happen,” Emily told Good Morning America. “We’re happy to be married, and we’re so happy that we could help Thresholds’ clients feel the connection of a Thanksgiving meal as a result of the wedding cancellation.”

Why Such a Discrepancy between the State Vaccine Dose Figures and the CDC’s Numbers?

Biden Proposes $200 Gun Tax and Firearm Buyback Program Along with...

Why Such a Discrepancy between the State Vaccine Dose Figures and...