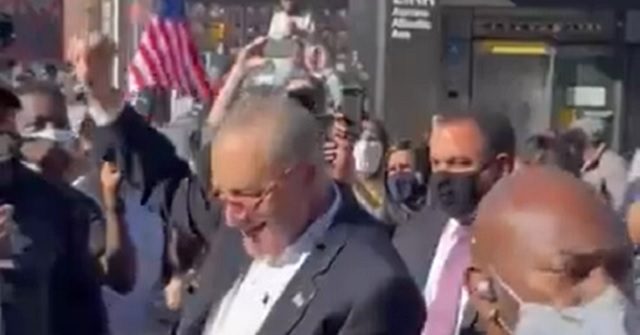 New York City Mayor Bill de Blasio and Sen. Chuck Schumer (D-NY) ignored social distancing guidelines as they took to the streets to celebrate the mainstream media’s announcement that Joe Biden would be the next president, taking photos and talking with other Biden supporters.

While de Blasio maintained the use of a face mask, he did not maintain a six-foot spatial difference with the hundreds of others who were in the area to celebrate. As seen here, de Blasio and his wife took the time to stop and pose for photographs as he wrapped his arms around supporters.

The photos were shared to social media by the official NYC Mayor’s Office Twitter page.

“Congratulations, President-elect @JoeBiden and Vice President-elect @KamalaHarris,” de Blasio stated in the tweet. “New York City stands ready to work with you to heal our country and set us on a better path.”

The Daily Mail, one of the first outlets to share the news of de Blasio breaking social distancing guidelines, said the “staunch Trump critic was pictured huddling in close with a number of New Yorkers to snap selfies near Grand Army Plaza in Brooklyn.”

Since the beginning of the coronavirus pandemic, de Blasio has been very strict on residents of the city, forcing them to practice social distancing and wear face masks.

In March, de Blasio warned that residents who refuse to heed the orders of officials and keep their distance from others could face fines. “They’re going to give people every chance to listen, and if anyone doesn’t listen, then they deserve a fine at this point,” de Blasio said at the time.

Also in March, de Blasio failed to follow his own city’s coronavirus guidelines by taking a trip to work out at the Brooklyn YMCA. In October de Blasio pleaded with New Yorkers that they “not travel out of state for the holidays,” claiming it could put the city at risk.

De Blasio also drew immense criticism from residents in the city earlier this year after he and his wife traveled 11 miles from their residence to Brooklyn’s Prospect Park.

New Yorkers were arrested by the dozens in May after they violated social distancing guidelines and visited the city’s beaches and parks.

Schumer, a native of Brooklyn, New York, celebrated the media’s projection of a Biden victory by joining supporters in the streets, where he claimed “we don’t want [Trump] here anymore in New York!”

While Schumer attempted to maintain the use of a face mask as he ignored a six-foot spatial difference between himself and others, he removed the mask to speak to those in attendance.

Another clip shared to social media shows a maskless Schumer telling a crowd, “Now we take Georgia, then we change the world!”

“Now we take Georgia, then we change the world,” Chuck Schumer via @StatusCoup pic.twitter.com/JMtGPzgZUH

As previously reported by Breitbart News, Schumer has a long history of supporting the use of face masks in public.

“President Trump can’t even model good behavior and consistently encourage Americans to wear a mask,” Schumer wrote in a July tweet. “Every time he takes the podium, he’s a threat to public health. We are living through one the greatest failures of presidential leadership in our country’s history.”

As thousands of his supporters openly gathered in large cities across the country and violated social-distancing rules to celebrate news of a projected victory, Biden remained silent, calling for unity as he addressed supporters Saturday night.

On Sunday, after the conclusion of several large protests, Sen. Kamala Harris (D-CA) sent out a reminder to her followers on social media to “practice social distancing,” telling them that “COVID-19 is still here.”

Suspected Purse-Snatcher Thinks He Had an Easy Score Until This Grandmother...