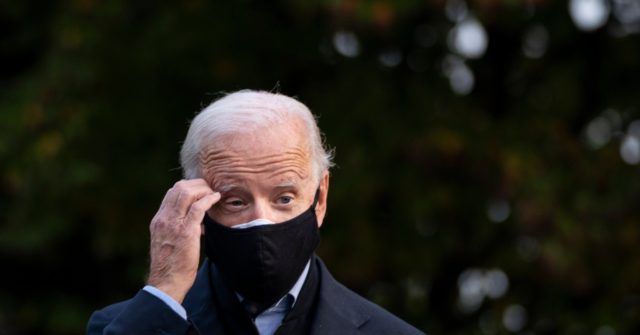 Democrat officials in Pennsylvania are “privately” speaking to the Biden campaign about potential margins of victory for the former vice president in the battleground state as counting remains underway, according to reports.

According to Politico’s Josh Bresnahan, these Democrat officials have told the Biden campaign that they believe the presidential hopeful will win the state by anywhere from 100,000 to 200,000 votes after all the counting is completed:

Why are they privately telling Biden campaign officials anything? https://t.co/MvoePb6Wi9

“So we may not know the results either today, but the most important thing is we have accurate results,” he said during the Wednesday brief. “Again, even if that takes a little longer than we’re used to.”

Before handing the brief to Secretary of State Kathy Boockvar (D), Wolf added that he would “vigorously” stand against any attempts to “attack” the vote in his state.

Three days before the election, Pennsylvania Attorney General Josh Shapiro (D) proclaimed that “if all the votes are added up in PA, Trump is going to lose.” On Election Day, he encouraged voters to seek help from Democrats, specifically:

Need help with your mail in ballot, finding out where to vote, or something else?

Call the @PADems Voter Assistance Hotline. Someone will answer and help you out. Call 1-833-PA-VOTES pic.twitter.com/Jf9KfLtNRI

While the Trump campaign claimed victory in Pennsylvania, skeptics believe Biden has the advantage in the uncounted votes, given their status as mail-in votes:

BTW: the reason Trump is now expected to lose Pennsylvania is that estimated vote-by-mail totals have risen sharply since Election Day.

That’s the difference between a Trump and a Biden win.

The Trump campaign reported a legal victory in Pennsylvania Thursday morning, which will allow GOP observers to watch ballot counts:

BREAKING: Appellate court in PA this morning ruling guarantees GOP observers can watch the ballot counts. They had been pushed away 16 sometimes 100 feet away. “I can’t stress enough how big a victory this is.” Justin Clark, Trump Deputy Campaign Manager #Election2020 #VoteCount

Minutes later however, they say: “Just filed in COMMONWEALTH COURT – on background – this is a request for an appeal to our Supreme Court – discretionary order. The Court will review the request to allow/deny the appeal.”

The Ohioans charged in connection with the US Capitol breach