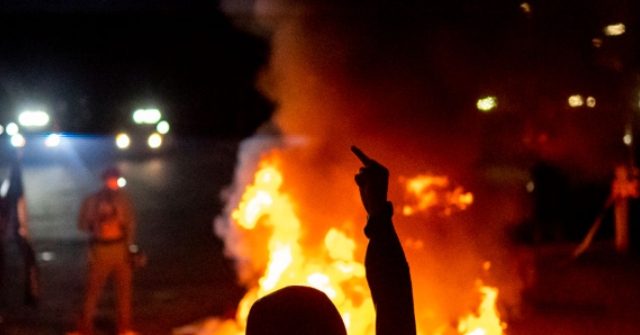 After more than a year of nearly endless rioting in Democrat-run Portland, only one person is going to prison, reports Fox News.

Between May 25 and Oct. 7, the U.S. Attorney’s Office in Oregon filed federal charges against 97 people connected to the Portland unrest. Since then 58 of those cases have either been dismissed outright or are on track for dismissal through a deferred resolution agreement. Thirty-two cases are still pending, with many likely to also end in dismissal according to sources. Seven people have entered guilty pleas.

Seven people pleaded guilty, but out of those seven and the 97 overall, just the one is headed to prison and only because he’s a moron who was caught on video with his shirt off trying to light the Justice Center on fire. Oh, and he had his name tattooed on his back.

That’s what Portland is doing, telling rioters from all over the country that it’s legal to riot in Portland because no one will prosecute you. You can burn and loot and riot and rampage and destroy – no problem, we’re just going to let you go.

Do you have any idea how insane this is? How it’s an act of suicide?

For more than a year, the left-wing terrorists in Antifa and Black Lives Matter have attacked numerous police stations, targeted federal buildings with arson attacks, and even attacked Portland police officers. Much of this has been caught on video.

These should be slam-dunk cases. But the Democrats in Portland are neither slamming nor dunking. Everyone’s free to go!

If you want a real laugh, look at the excuse someone drummed up to justify Portland’s dangerous fecklessness… “The prosecutors in that office, the number of prosecutors, that support, even the courthouse system, isn’t really set up to handle those sorts of numbers,” said a former federal prosecutor.

We’re talking about 97 cases between May 25 and October 7. That’s almost five months. The prosecutor can’t handle 97 prosecutions over 130 or so days? What a load of bunk. Regardless, even if that were true, it still doesn’t explain why, of those seven guilty pleas, only one will serve time.

So what’s the result of Democrat-run Portland’s refusal to enforce the law? Well, here’s what happened just last weekend:

Late Saturday, two large groups – one about 30 to 50 people and another about 80 to 100 people – started their battle against law enforcement near the Immigration and Customs Enforcement (ICE) facility in south Portland while the other blazed a path of destruction from Shemanski Park to a federal courthouse, Portland police said.

They shattered windows and graffitied buildings of several businesses and government facilities, according to Portland police, who arrested five people including one man who’s accused of pulling a butterfly knife out on a cop.

Why do Democrats choose to live this way?

This is a choice, after all.

Portland’s morons have been voting Democrat for decades, and you get what you vote for.

What I don’t get is, why? Who wants to live like this? Who wants the constant tension, turmoil, disruption, and uncertainty of all this arson and violence?

Do Democrats just enjoy the violence and drama, along with high taxes and outrageous housing prices?

Do they enjoy feeling helpless and unarmed in their overpriced dwelling as these emboldened monsters rampage through their city?

People should be allowed to live their lives however they choose, so I’m fine if Portland’s morons want to live this way – hell, I don’t care. It’s just baffling… Well, maybe not.

Some people are just stupid.