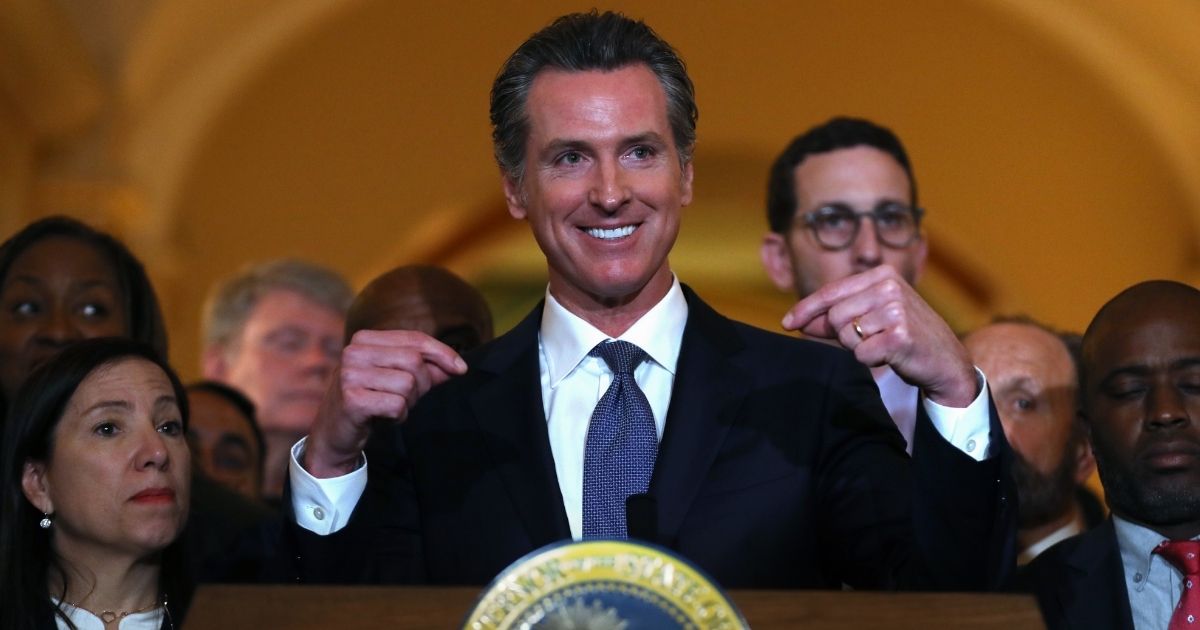 Californians should ask Gov. Gavin Newsom if they get to have a proper Thanksgiving dinner if they have it at The French Laundry, a three-star Michelin restaurant.

Most of the state can’t afford the restaurant’s $350-a-person price tag or make it out to Napa Valley — after all, the state of California has issued an advisory against non-essential travel. Also, the California Department of Public Health has banned private gatherings of three or more households.

Gov. Newsom isn’t most of the state, however. On Nov. 6, when lobbyist and longtime Newsom adviser Jason Kinney had his 50th birthday, the governor, “first partner” Jennifer Siebel Newsom and 10 other people — representing three or more households, because of course they did — gathered at The French Laundry in Yountville, California, to celebrate. The restaurant is still open, albeit with outdoor seating.

According to the San Francisco Chronicle, Kinney representative Molly Weed said the dinner followed all state protocols but didn’t answer why more than three households attended.

“This was a small, intimate, 12-person dinner held outdoors with family and a few close friends to celebrate a 50th birthday,” Weed said in a statement.

In his own statement, the governor insisted the dinner didn’t break any of the state’s guidelines but that he’s still sorry he (sigh) didn’t set a better example.

“While the First Partner and I followed the restaurant’s health protocols and took safety precautions, I should have modeled better behavior and not joined the dinner,” Newsom said in the statement, according to Politico.

Yes, because we’re really upset that the multimillionaire governor wasn’t a better role model for us gape-jawed proles. I’m not a Californian, but I know the only reason I was wearing my mask, using hand sanitizer and avoiding gatherings with three or more households was because some oleaginous wine magnate-turned-politician who still thinks Pat Riley’s 1992 hairstyle is the epitome of cool said that I should.

Then I found out Newsom wasn’t modeling the kind of behavior I was emulating — so I made a reservation at the nearest Michelin star-rated restaurant, along with 15 people from numerous households, and we proceeded to breathe heavily on each other for two hours over roasted cauliflower velouté and dégustation of Broken Arrow Ranch antelope, just like The French Laundry is serving this Sunday.

Do you think Gavin Newsom looks like a hypocrite?

I plan on doing the same thing for Thanksgiving.

So, as for how the dinner Newsom attended didn’t break any of the state’s guidelines — according to Politico, restaurants exist in a kind of gray area.

The operative guidance for private gatherings at the time Newsom attended the birthday dinner, issued Oct. 9, defines those gatherings “as social situations that bring together people from different households at the same time in a single space or place.” However, July CDPH guidance for restaurants merely says that they should “[l]imit the number of patrons at a single table to a household unit or patrons who have asked to be seated together” with no limit on households.

However, if you’re having a private affair — which is somehow supposed to be more problematic than eating in a restaurant — the CDPH says “[g]atherings that include more than 3 households are prohibited. This includes everyone present, including hosts and guests. Remember, the smaller the number of people, the safer.”

This isn’t about “modeling” behavior, it’s about hypocrisy. No one is choosing whether to mix with three or more families at a restaurant (or privately, since the CDPH guidelines are nigh unenforceable) on the basis of whether it’s going to let Gavin Newsom down.

Instead, it’s about the fact Newsom’s administration seems predisposed to tell Californians how to live their lives while the guy at the top seems to have no problem making a mockery of the rules he makes for everyone else.

Over the summer, Newsom took heat when it was discovered that a winery he owns in Napa Valley was still open during the July Fourth weekend despite the state ordering wineries shuttered in other counties.

Yes, Newsom’s winery wasn’t in one of those counties, and he handed over control to another party when he entered politics. However, if he couldn’t intervene directly, proactive thinking by the current president of his business concerns — his sister, Hilary Newsom Callan — might have “modeled” some decent behavior for Californians.

So Gavin Newsom is closing down restaurants and bars and destroying family-owned businesses all over California. Oh wait, here’s one that’s still open! 👇🏼 pic.twitter.com/LwTVRejYBL

That scab has long healed. However, one that hadn’t was the impression that Oct. 9 CDPH guidelines were supposed to apply to Halloween, Thanksgiving and Christmas gatherings.

In addition to the three-household maximum, that guidance also stated that gatherings must happen outdoors, attendees can only use the restrooms if they’re “frequently sanitized” and must sit six feet apart from those not in their household.

This prompted the kind of social media backlash that you might expect:

CA Gov’s Thxgiving insanity:
-Must be held *OUTSIDE*;
-Guests may use bathrm inside if sanitized;
-Masks on while not eating;
-Singing “strongly discouraged;”
-Max of two hours together;
-6 feet *mandated* in all directions b/twn all at table & otherwise. https://t.co/wPpOBgSctN

“All gatherings must include no more than three households, including hosts and guests, and must be held outdoors, lasting for two hours of less.”

Just make a few signs protesting Trump. Then invite as many people as you want, and you’ll have no problem. https://t.co/LOUPgUTrFI

How many of you sheep are going along with Newsom’s Thanksgiving protocols ?

“I read somewhere some folks asserting we put out guidelines for the holidays,” Newsom said last month, according to Deadline. “They simply were misled or, intentionally, were misleading people. We have not put out Thanksgiving guidelines.”

Conveniently, Newsom’s administration put out those guidelines on Friday, the same day The French Laundry story broke. It’s seldom a good augury when something is released at the end of the week to little fanfare, although California health secretary Dr. Mark Ghaly was trotted out to announce the update. Everyone who freaked out last month isn’t going to be assuaged.

NEW: California is launching a Blueprint for a Safer Economy.

Your county will be assigned a color based on:
– Case rate
– Positivity rate

Your color determines how businesses can operate in your county.

The good news is that now everybody doesn’t have to eat outdoors: “All gatherings must be held outside in the Purple Tier, and indoor gatherings are strongly discouraged in Red, Orange and Yellow Tiers.” The bad news: According to Politico, more than half the state’s population is currently in the Purple Tier, with more counties likely to be added next week.

There’s still the mandated six-foot seating distance between diners who aren’t in the same household and “face coverings must be worn in accordance with the CDPH Guidance on the Use of Face Coverings, unless an exemption is applicable.”

During the media briefing, Ghaly was asked about Newsom’s visit to The French Laundry. According to KABC-TV, he “said his focus was on reducing COVID-19 spread in the state and referred reporters to Newsom’s statement.”

However, Robert Salonga at the San Jose Mercury News astutely noted that “for the 20 or so minutes of the news conference leading up to that question, Ghaly reiterated an array of health and safety advisories that essentially told Californians not to do what Newsom did.”

If only the governor had modeled better behavior for all of us. Now if you’ll excuse me, I have to prepare the sabayon of pearl tapioca with Island Creek oysters and Regiis Ova caviar like they’re serving at The French Laundry. I’m having 12 households over for dinner and I’ll be darned if keeping those ingredients fresh for that many people isn’t difficult, particularly when you’re serving such a fragrant dish in an unventilated space.

Plus, I need to google what a “sabayon” is. He’s led me down the primrose path to COVID ruin, that Gavin Newsom.