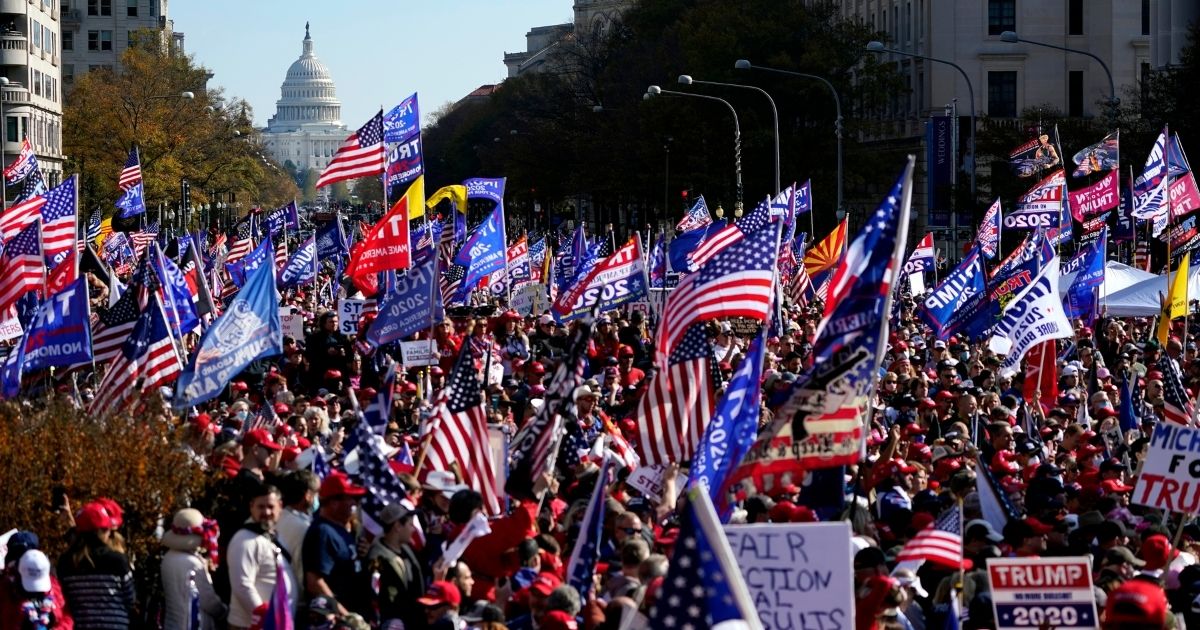 I can’t imagine the psychic energy it must take to persist in politics in a country where you believe the other side lives in a kind of Jonestown archipelago, persisting in cult-like thrall to a toxic leader whose orders have arrayed millions of your countrymen against all that’s good and pure.

While there are plenty of strange beliefs on the left about President Donald Trump that must exhaust the believer, the “cult of MAGA” delusion must be the most debilitating.

We’re not talking about someone who makes the statement as a throwaway line, either — we’re talking about an individual who believes in his soul that Trump voters need deprogramming, and not just in a metaphorical sense.

This belief has been kicking around in the fever swamps of leftist Twitter for some time now — really, since about 2015 — but it’s now accepted enough that a member of the Democratic National Committee is spouting it.

David Atkins, a member of the DNC’s California convention, became a lot more famous than he previously was this week when he implied that the 75 million people who voted for Trump were basically all dwelling in a massive mental Branch Davidian compound.

“No seriously…how *do* you deprogram 75 million people? Where do you start? Fox? Facebook?” he wrote in a Tuesday tweet. “We have to start thinking in terms of post-WWII Germany or Japan. Or the failures of Reconstruction in the South.”

No seriously…how *do* you deprogram 75 million people? Where do you start? Fox? Facebook?

We have to start thinking in terms of post-WWII Germany or Japan. Or the failures of Reconstruction in the South.

Once you get into denazification territory, the Godwin alert should have gone off that this was a bad idea.

“This is not your standard partisan policy disagreement. This is a conspiracy theory fueled belligerent death cult against reality & basic decency,” Atkins wrote. “The only actual policy debates of note are happening within the dem coalition between left and center left.”

This is not your standard partisan policy disagreement. This is a conspiracy theory fueled belligerent death cult against reality & basic decency.

The only actual policy debates of note are happening within the dem coalition between left and center left.

Atkins sounds like the kind of guy whose knowledge of Republicans is confined to slinging barbs back and forth on Twitter with people who are every bit as extreme as he is.

Is David Atkins representative of Democrats?

RELATED: Here’s the Shocking Reason Michigan Board Members Want To Rescind Their Votes

As for any sort of real-life experience with The Other Side, this is a guy whose purview within the DNC, according to his website, is a series of Southern California districts so divorced from the political realities in the Year of our Lord 2020 as to render his opinions meaningless.

But wait, it gets better. (This depends on your opinion of what “better” entails; in my case, I’m talking about watching a DNC member have a full-fledged meltdown even though Democrat Joe Biden is the presumptive president-elect. Your mileage may vary.)

“I know conservatives are upset by some of the responses here. And yeah, many are out of line. But what do you expect people to do in self-preservation?” Atkins said in a follow-up tweet Thursday.

“The Right has been running 4 years on ‘f— your feelings, my conspiracy theories are valid opinions, and we have more guns.’”

He continued, “You can’t run on a civil war footing hopped up on conspiracy theories hating everyone who lives in cities, mainlining Fox/Breitbart/QAnon, threatening to kidnap governors and shoot protesters, without people trying to figure out how to reverse the brainwashing.”

WARNING: The following tweet contains graphic language that some viewers will find offensive.

You can’t run on a civil war footing hopped up on conspiracy theories hating everyone who lives in cities, mainlining Fox/Breitbart/QAnon, threatening to kidnap governors and shoot protesters, without people trying to figure out how to reverse the brainwashing.

Yes, this is all of us — 75 million strong, all hopped up on QAnon 4chan drops and looking for a Democrat governor to stuff in the trunk of our car.

Remember, the establishment media went crazy when Marjorie Taylor Greene, a QAnon believer, got elected to Congress as a Republican. I’m all for calling that out, mind you, but how many stern messages of warning do you think Atkins got in the DNC Slack group for posting an unhinged thread wherein he implies Republicans and conservative independents are little more than Vichy France collaborator cult-members? How many people will end up publicly disavowing David Atkins as being a fringe conspiracy theorist who believes in reeducating 75 million Americans?

And it continued, with Atkins declaring that “conservatives are ‘literally giving themselves COVID just to own the libs. They’re dying in COVID wards insisting they don’t have COVID because it must be a liberal plot.’”

He backpedaled a bit, saying he wasn’t really “advocating ‘re-education camps’ or anything like that.” He just thinks that we’re getting too much “infotainment” (I’m guessing he hasn’t turned on CNN recently) and that we all need to watch footage of “kids in cages” and “COVID wards,” which has a vaguely “A Clockwork Orange” tinge to it.

And yes, it might be healthy to break the spell of the cult programming by showing COVID wards, the kids in cages and other victims and consequences of the conservative infotainment cult on the local news, the newspapers, social media, etc, so that people see what they have done.

It’d be disingenuous to pretend that this started with David Atkins. In fact, the most famous proponent of the theory that modern conservatism — particularly of a populist bent, and especially if it involves explicit support for the president — is CNN’s Don Lemon. (Speaking of “infotainment” and its “consequences,” I didn’t see Lemon or his ideological Bobbsey twin, Chris Cuomo, mentioned in Atkins’ thread about how infotainment has consequences.)

“If I had a real friend who was involved in a cult, which I feel it is cultish behavior, I must try to help them,” Lemon said of Trump supporters during an August segment.

America, this is what CNN thinks of you…
pic.twitter.com/puuVjRLlw1

This is all fun and games until political discourse gets hurt, however.

The first read-through of Atkins’ tweetstorm might produce laughter. The second is disconcerting.

He talks about how “local news, the newspapers [and] social media” should show “the kids in cages and other victims and consequences of the conservative infotainment cult.” He intimates that Facebook should play a part in “deprogramming” as in “post-WWII Germany or Japan.”

Strip the unbalanced language from it and it’s little more than yet another call to restrict conservative voices on tech platforms — and not just fringe voices, but anything remotely pro-Trump.

Is this a stretch? Atkins’ rant is wild-eyed and inchoate, but it contains bits and pieces of less hastily assembled arguments we’ve heard elsewhere.

Dismiss this as a crank DNC member who went delirious with his Twitter account at your own peril.

We Can Do Services with Distancing and Masks, No More ‘Hypocrisy’...