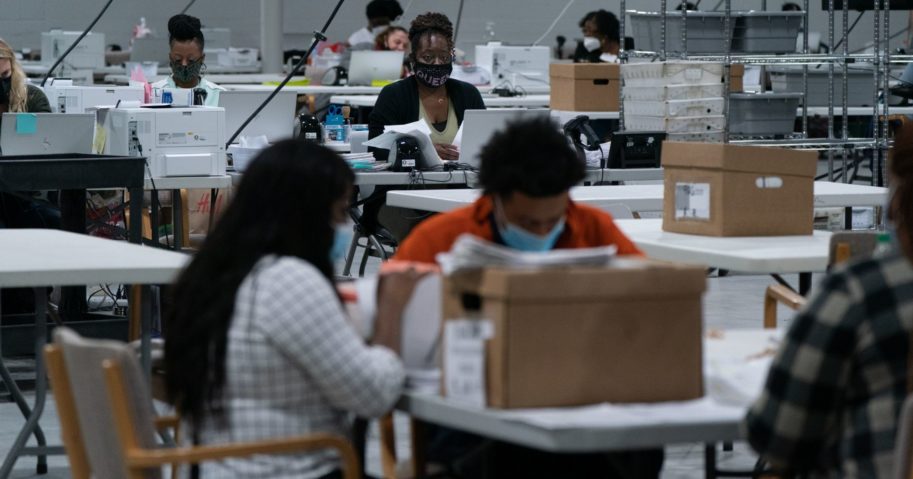 A recount sought by President Donald Trump in Georgia was delayed Sunday after a Dominion Voting Systems server crashed.

The recount in Fulton County, which includes Atlanta, was stalled as a result of the problem, according to WXIA-TV.

After the initial tally of ballots cast in the presidential election, presumptive potential President-elect Joe Biden leads Trump by about 13,000 votes.

The Trump campaign has insisted that there has been voter fraud in states that include Arizona, Nevada, Georgia, Michigan and Wisconsin, as well as Pennsylvania.

Despite multiple anecdotal claims of voting irregularities, proof has yet to surface that there was a widespread effort to distort the voting process in such a way that would have impacted the final results of the presidential election.

Dominion voting machines have been at the center of allegations, although no fraud or inaccuracy has yet been documented or proven.

The latest instance of a Dominion machine being involved in an elections problem raised eyebrows on Twitter.

Are you thinking what I’m thinking? 😎

‘Officials in the county, which includes Atlanta, said that the server was newly purchased.’

However, Fulton County officials said the issue will be resolved.

“Technicians from Dominion have been dispatched to resolve the issue,” Fulton County officials said in a statement. “The Georgia Secretary of State’s office has also been alerted to the issue and is aware of efforts to resolve the problem.”

The counting process is scheduled to resume Monday.

“I can [assure] the voters of Fulton County that are watching us that, in Fulton County, Georgia we run open, fair and transparent elections,” Robb Pitts, Fulton County election commission chair, said, according to WAGA-TV. “This is a very transparent process [to] make sure everything is above board.”

Prior to the glitch in the Dominion server, Fulton County had recounted 88 percent of the votes cast, including all votes other than in-person ballots.  The deadline to complete the recount is Thursday.

The Trump campaign had wanted signature matching as part of the recount, but Georgia officials said it could not be done.

Judge orders Georgia “to maintain the
status quo” and forbids “wiping or resetting any
voting machines in the State of Georgia until further order of the Court” in response to @SidneyPowell1, @LLinWood lawsuit. https://t.co/DUNMzTlytN

The lawsuit in which Batten ruled claimed election results were inaccurate due to a defect with Dominion machines, according to Politico.

The lawsuit sought to have independent inspectors examine the machines.

Batten’s order gives Georgia officials and officials in the counties until Thursday to file a response indicating why the inspection should not be performed.