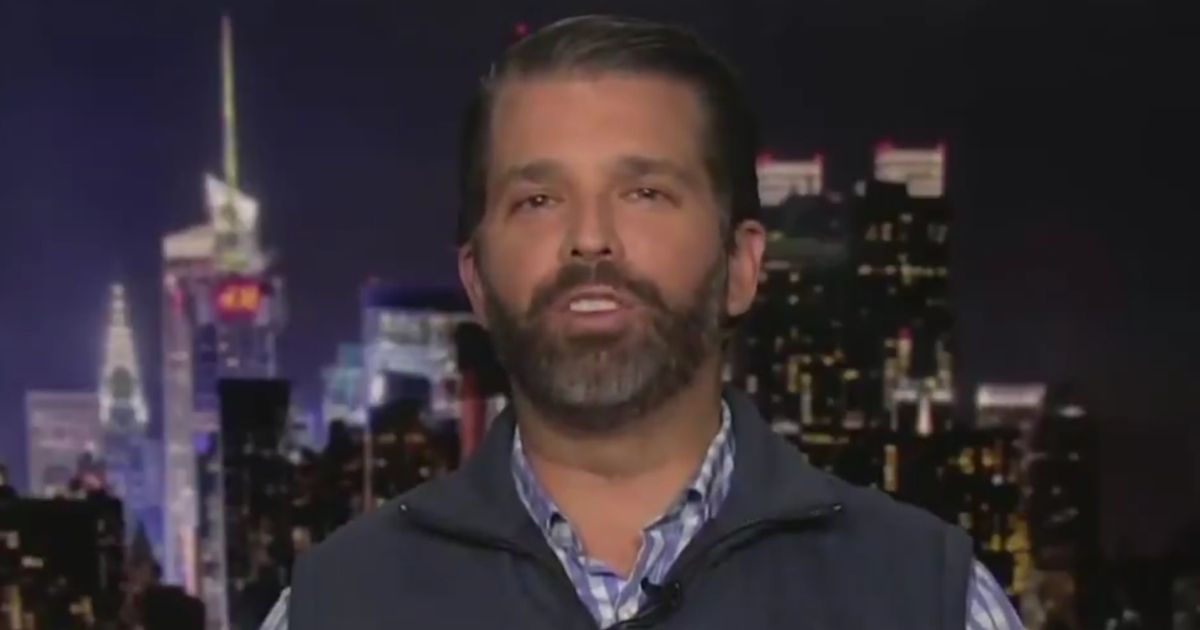 On Tuesday, the U.S. Senate began an impeachment trial against former President Donald Trump for the second time. The lone article of impeachment brought against him was “incitement of insurrection” for the incursion into the Capitol on Jan. 6, according to NPR.

Many Republicans have spoken out against the impeachment trial and called it a politically motivated event. On Tuesday night’s episode of “Hannity” on Fox News, the former president’s son Donald Trump Jr. agreed.

“If it wasn’t for double standards, the Democrats would have no standards at all,” he said.

“If it wasn’t for double standards, the Democrats would have no standards at all.” – @DonaldJTrumpJr on the Democrats’ sham impeachment. pic.twitter.com/58gW1ETddH

He went on to accuse Democrats of partaking in behavior that could easily be considered “incitement” by their own standards.

“I think in your monologue, you sort of highlighted all of the hypocrisy that we saw during 10 months of rioting, looting, arson, in your face type of politics. Candidly, whatever my father said on Jan. 6 was mild in comparison.”

As Trump Jr. pointed out, many Democrats did not seem to have a problem with the mass destruction caused by the Black Lives Matter riots this summer. In fact, prominent members of the party, such as now-Vice President Kamala Harris, all but encouraged it.

Do Democrats have a double standard when it comes to incitement of violence?

According to The U.S. Sun, Harris tweeted support for the Minnesota Freedom Fund in an attempt to bail accused criminals from the protests out of jail.

“If you’re able to, chip in now to the [MFF] to help post bail for those protesting on the ground in Minnesota,” she wrote on June 1.

The results of the fund were even more disastrous than one could imagine. Not only did the fund help bail violent rioters and looters out of jail, but it also helped bail out other criminals.

In addition to effectively supporting violence, Democrats have also repeatedly engaged in the type of “violent rhetoric” that they accuse Trump of.

The phrase from Jan. 6 that the Democrats have singled out is Trump’s assertion, “If you don’t fight like hell you’re not going to have a country anymore,” according to The Guardian.

RELATED: Tampa Mayor Vows to Track Down Maskless Super Bowl Fans, But Here Are Many Photos of Her Maskless

In the opening statements of Trump’s impeachment trial, Democrats conveniently left out the part where Trump told supporters to “peacefully and patriotically make your voices heard,” as The Western Journal’s own Elizabeth Stauffer reported.

As the left focuses in on the vague call to “fight like hell,” they ignore much more direct threats from their own party.

“You have released the whirlwind & you will pay the price.”

Can you imagine the media outrage if McConnell said this about RBG?

“I want to tell you, Gorsuch, I want to tell you, Kavanaugh — you have released the whirlwind and you will pay the price,” Schumer said in a March speech during a pro-choice rally. “You won’t know what hit you if you go forward with these awful decisions.”

The crowd before Schumer cheered as if to say, “We love threatening justices to try and influence their decision!”

Even before that, California Rep. Maxine Waters encouraged crowds of supporters to harass Trump administration members in public in 2018, according to liberal news outlet CNN.

“If you see anybody from that Cabinet in a restaurant, in a department store, at a gasoline station, you get out and you create a crowd, and you push back on them,” she said. “And you tell them they’re not welcome anymore, anywhere.”

The phrase “You’re not welcome anymore, anywhere” seems like a pretty clear threat. Again, the throng of leftists around Waters clapped and cheered in support of such rhetoric.

Like it or not, politics have been ugly for a long time. That fact is not to excuse such behavior, but rather to point out that the heated political climate in America did not start, nor has it ended, with Trump.

Should Democrats really want to tone down the rhetoric and lower the political temperature, they must accept the fact that members of both parties hold responsibility for getting us here.