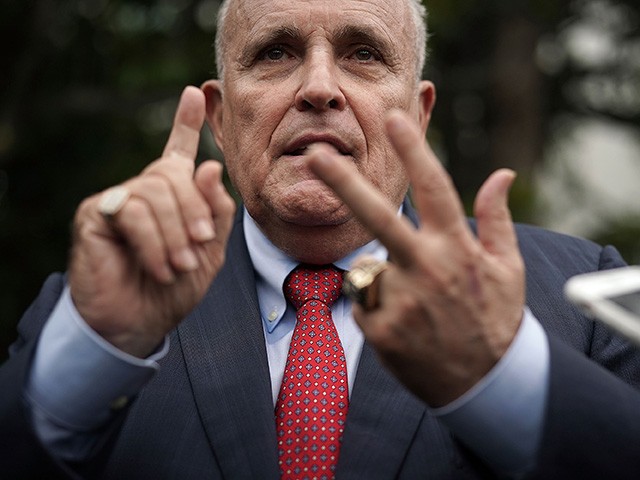 Rudy Giuliani announced on Saturday that President Donald Trump will not concede the 2020 presidential election, as the validity of “at least 600,000 ballots” are still in question in Pennsylvania — a key swing state.

“Obviously, he’s not going to concede when at least 600,000 ballots are in question,” Giuliani said in response to a reporter’s question about the president conceding in the wake of media calling Pennsylvania for Joe Biden.

“It’s not my job to determine if the ballots are right or not; it’s their job. With a mail-in ballot or an absentee ballot, the burden, under law, is on the Party that’s proposing it, which is why it has to be inspected,” Giuliani added at the press conference in Philadelphia on Saturday.

“They conducted themselves in a way that suggests that there was fraud,” Giuliani continued. “One of the things that does involve fraud is not making it possible for the people who were supposed to inspect to inspect.”

“The voters expect that their inspectors are going to be able to inspect,” Giuliani affirmed. “The voters were defrauded of that right. We will not know if those 600,000 ballots were valid, invalid, or not. Having conducted themselves that way, they certainly present a very strong circumstantial case that the ballots were tampered with.”

“Also, the highly unusual, almost mathematically impossible reduction in the vote in that period of time also raises the question that the ballots were tampered with,” said Giuliani. “So they’ve done everything they can to yell out to you, ‘We were tampering with the ballots,’ without being stupid enough to show it to you.”

“They kept our inspectors away, uniformly,” continued Giuliani. “I don’t think we’re going to find a single Republican that ever got to look at one of those ballots, when the law requires that we are allowed to look at them.”

“They did it here, and they did it in Pittsburgh. That can’t be a coincidence,” he added. “How did they figure out in Pittsburgh they should do the same thing that happened here? And they didn’t do it in other places.”

On Friday, the United States Supreme Court ordered Pennsylvania election boards to separate the count of mail-in ballots that arrived after Election Day.

The order, which was signed by Justice Samuel Alito, suggests that the justices may exclude the late-arriving ballots. This came in a subsequent ruling involving the results of the presidential election.

Despite all of these details still being in question, multiple media outlets called Pennsylvania in favor of Biden — moments before Giuliani’s press conference in Philadelphia began — giving the former vice president more than the 270 Electoral College votes necessary for him to be projected as the president-elect.

During his press conference, Giuliani also pointed out the corrupt nature of politics in Philadelphia — a city run by Democrats.

In May, for example, a former Philadelphia judge of elections, Domenick J. Demuro, was convicted for his role in accepting bribes to cast fraudulent ballots and certifying false voting results during the 2014, 2015, and 2016 primary elections in Philadelphia.