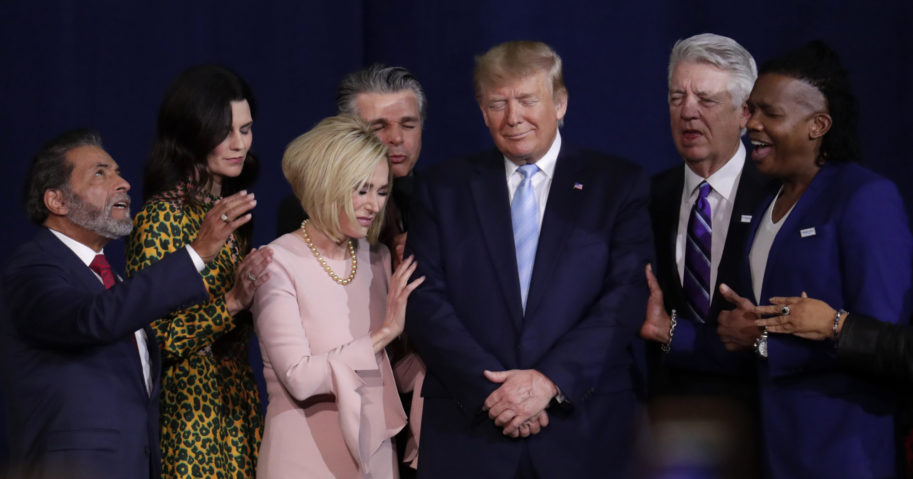 The conservative evangelical Christians who helped send Donald Trump to the White House four years ago stuck by him in 2020.

But even if Trump doesn’t get a second term, some conservative Christians see reasons to celebrate this year’s election results.

White evangelical voters made up 23 percent of the vote nationwide and overwhelmingly favored Trump this fall, with about 8 in 10 backing him, according to AP VoteCast.

Their support may not have been enough to re-elect the president — with Democratic nominee Joe Biden in the lead as states continued to count votes on Friday — yet evangelicals still took heart in their strong presence at the polls and the GOP’s success in down-ballot races.

“There’s no question that we did our job,” Ralph Reed, the veteran GOP activist who founded the Faith and Freedom Coalition nonprofit, said of his fellow conservative Christians.

Reed left room for the president to eke out a victory. But he also singled out Democrats’ lackluster showing in key congressional races as a positive sign.

“Should President Trump come up short … if that’s what ends up happening — other than that, it was a very impressive cycle for voters of faith and for social conservatives in the Republican Party,” Reed said.

While many of Trump’s evangelical allies are white, the president’s campaign also worked to appeal to Latino voters and the GOP saw signs of improvement with that demographic in several states.

The Rev. Samuel Rodriguez, a Latino evangelical pastor who has advised Trump, said those advances with Latino voters are one reason why evangelicals should view the election as “a win” for their priorities.

“I would argue, with great due deference to our president, that if we fall short, it’s not due to the evangelical agenda of life, religious liberty and biblical justice,” Rodriguez said.

“It was more a rejection of the personality.”

Looking ahead, Rodriguez said, “if we can reconcile the message and the messenger, I think the future looks pretty amazing.”

Among Latinos, 61 percent of evangelicals backed Trump, according to AP VoteCast, far higher than the 35 percent he received from Latinos overall.

Biden’s campaign had tried to chip away at Trump’s evangelical base as part of its faith outreach operation.

But Robert Jones, author of two books about white Christians, said there was no erosion of white evangelicals’ support for Trump and the Republican Party in this election — and that applied to both men and women in that demographic.

“They absolutely stood by their man,” said Jones, who oversees frequent surveys of religious Americans as CEO of the Public Religion Research Institute, an independent Washington-based nonprofit.

Jones said white evangelicals, thanks to their high turnout rate, continue to have an outsized influence on election results, both nationally and in certain states.

Without their political engagement, Democrats would have made greater inroads this year in states such as Texas and North Carolina, he said.

Another top evangelical Trump supporter, Dallas megachurch pastor Robert Jeffress, said it was premature to talk about a Biden presidency, noting that Al Gore and George W. Bush spent weeks contesting the results of the 2000 election before the Supreme Court ruled in Bush’s favor.

If Biden does become president, Jeffress said via email, “Christians would have the same responsibility to him that they have to President Trump: They should commend his good policies, condemn his bad ones, and pray for his success.”

Jeffress hailed Trump as “the most pro-faith president in American history.”

Do you think Trump is ‘the most pro-faith president in American history’?

The Rev. Albert Mohler, president of the Southern Baptist Theological Seminary in Louisville, Kentucky, said on Thursday that while fraud has happened in past elections, “making generalized charges of voter fraud without specifics that can be investigated, that’s quite dangerous to America as a nation.”

Mohler looked ahead to the possibility of a Biden presidency coinciding with continued GOP control of the Senate, which depends on the outcome of two Georgia runoff elections in January.

He expressed hope that a division of power between the Senate and White House might thwart possible Biden policies that would worry evangelicals.

In a phone interview on Friday, Mohler said pro-Trump evangelicals had differing motives for supporting the president.

“There are those who see [Trump] as the answer to their prayers, and others who see him as necessary in this political emergency,” Mohler said.

“The idea of a Biden-Harris administration is unthinkable for many evangelicals.”