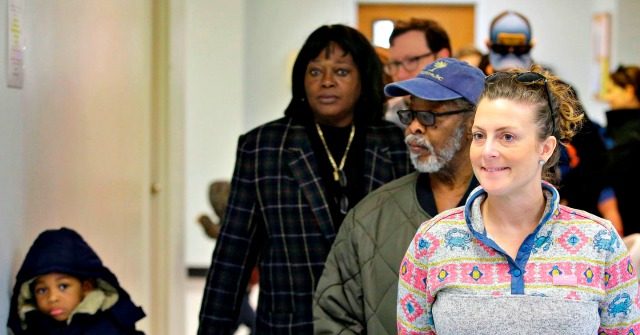 President Donald Trump won 64 percent of white people who did not graduate from college in the 2020 election — which is down from his 70 percent share of those voters in 2016.

Joe Biden won that missing share, allowing him to get 35 percent of non-college whites in 2020. That is up six points from Hillary Clinton’s share of 29 percent in 2016, according to the exit polls run by the media coalition in both years.

Trump partially offset that lost share by boosting his 2020 turnout compared to 2016 — but so did the Democrats. The two parties’ supporters cast at least 151 million votes — up at least 12 million votes from 139 million in 2016.

Amid the extra votes, the vote share of white/non-college voters remained at 34 percent — just as in 2016.

The vote share of white/college-grad voters crashed sharply, from 37 percent in 2016 to 31 percent in 2020. That six-point crash cost Trump roughly 4.5 million votes.

The gap was filled by the non-white share of the electorate.

The non-white share grew from 29 percent in to 35 percent in 2020, including blacks, Asians, Latinos, and “other.”

Almost all of the extra non-white voters were non-college voters.

The non-white/non-graduate share of voters jumped from 16 percent in 2016 up to 22 percent.

The non-white/graduate share of voters remained flat at 13 percent.

Trump did improve his score among non-whites — but only enough to grab perhaps two of the extra six points. That translates into roughly three million extra votes for Biden.

The voting data is likely to be upgraded and sharpened, because current data is based on flawed exit polls. The exit polls did not include voters who mailed in their votes, and some walk-in respondents declined to speak to the exit pollsters. But those flaws may not impact the estimated share of various voters and demographics.

Latino women alone comprised eight percent of the electorate. They voted for Biden by a lopsided margin of 70 percent to 28 percent amid a media barrage of articles about “kids in cages” at the border.

Trump could not — or did not — offset this non-white/non-college surge with a successful pitch to white or non-white college-grad voters. In October, some of Trump’s deputies touted Trump’s last-minute reforms of the H-1B outsourcing visa, but that pitch never made it into Trump’s speeches amid bitter resistance by business groups.

White college graduates shrank to a much smaller share of the 2020 electorate, dropping from 37 percent in 2016 to 31 percent in 2020 — roughly matching the gain by non-whites.

The smaller college grad share also shifted towards Biden, giving Trump just 49 percent of the white college grad vote. That is down a few points compared to his 2016 score of 48 percent plus most of the 7 percent who declared  “other/no answer.”

But the bigger non-white turnout swamped Trump’s 5-point gain and so delivered even more votes to Biden in critical swing states, including Nevada and Arizona.

The rising share of Latino voters — and Trump’s partial but incomplete success in winning their votes — is pushing GOP reformers to consider a 2024 GOP candidate who can offer a more populist pitch to whites and non-whites.

“Part of it is incorrect assumptions about how minority voters will perform based on previous elections. Democrats can no longer take Black and Latino voters for granted,” former Rep. Carlos Curbelo (R-Fla.) told TheHill.com.

Bingo. Only a conservative-populist GOP can win the future. https://t.co/Krvekb5uAJ

As you can see, Trump is doing way, way better than 2016 in Hispanic and Cuban areas. He's also doing better in majority black precincts. Biden *is* doing better in older and relatively white areas, as you can see. But not by much–and that doesn't cut it in diverse FL

But he also lost his share of the declining white/college voter category, which shrank by almost one-sixth if the exit polls are correct.

Trump’s white/college share won him roughly 15 percent of the electorate in 2020 — down from roughly 18 percent in 2016. Those missing three points (roughly 4.5 million people) were a greater loss than the missing two points (three million) from white/non-college voters.

Trump won just 47 percent of this group in Pennsylvania, 56 percent in Georgia, 46 percent in Michigan, and 50 percent in North Carolina.

Still, those scores are a big jump from the polls taken before Trump October 28 H-1B reforms.

On October 13, Monmouth showed Trump was getting 48 percent of white college graduates in North Carolina, up from 42 percent on September 3.

The exit poll data comes from an exit survey funded by multiple media outlets. According to CNN, the exit polls “…are a combination of in-person interviews with Election Day voters and telephone polls measuring the views of absentee by-mail and early voters, and were conducted by Edison Research on behalf of the National Election Pool. In-person interviews on Election Day were conducted at a random sample of 115 polling locations nationwide among 7,774 Election Day voters. The results also include 4,919 interviews with early and absentee voters conducted by phone. Results for the full sample have a margin of error of plus or minus 2 percentage points; it is larger for subgroups.”