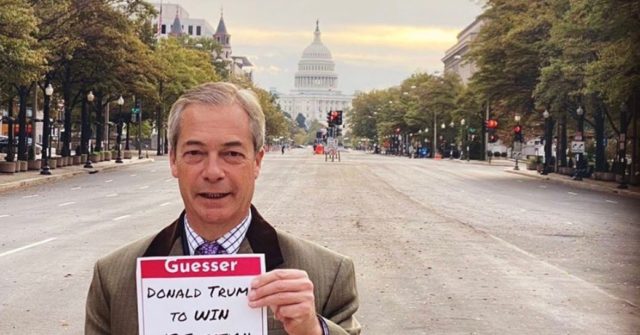 The United States of America would turn into a global “laughing stock” if 77-year-old Joe Biden wins the presidential election, said the leader of the Brexit movement Nigel Farage.

Ahead of the election, Mr Farage revealed that he placed a £10,000 bet on President Trump to be victorious and secure a second term, as he claimed Joe Biden is “clearly unfit for office”.

On Britain’s Daily Telegraph ‘The Trump Card’ podcast, Farage said that Biden “can barely string a sentence together, he forgets where he is, he forgets the name of his wife… I mean he doesn’t know where he is, this bloke.”

“If he becomes the American president, America becomes a laughing stock, of that I have no doubt,” warned the longtime Trump ally.

Mr Farage said that he believes the main reason that voters would choose Biden is a dislike of President Trump, which he claimed is not a recipe for enthusiasm for the Democrat challenger and is the reason for the lacklustre attendance at Biden campaign events.

In contrast, Farage described Trump “on fire” and “very entertaining”. He pointed to Trump’s humour on the campaign trail and noted the theatrical arrival of Air Force One as thousands of supporters await the president’s arrival, which is marked by the sounds of Phil Collins In the Air Tonight and is capped off by Trump dancing on stage to the Villiage People’s YMCA.

“You can dislike the guy, you can disagree with him politically, but what you can never do is deny the fact that this is the greatest political entertainer and extrovert the world has ever seen, and I actually think will ever see,” he said.

“Trump can beat the media, beat the pollsters and beat Washington once again tomorrow,” Farage proclaimed on social media.

The President is the greatest political showman we have ever seen and he’s having a phenomenal final day of campaigning.

Big money is now going on his re-election in the betting markets.

Trump can beat the media, beat the pollsters and beat Washington once again tomorrow.

The arch-Brexiteer compared the efforts to derail Trump’s first term in office to the establishment attacks in the UK which tried to “delegitimize” the Brexit vote: “telling it was Russia, telling us it was Cambridge Analytica that somehow hoodwinked the nation.”

“I think his courage, to stick to his guns through these four years, has been remarkable,” he added.

The leader of the newly formed anti-lockdown Reform Party in the UK finished by saying that he was “disappointed” by the president’s performance in the first debate but said that by the time of the second debate, Trump had “control of the arguments” and that his messaging in the final stretch of the campaign has been exactly right.

“It’s dead simple, you vote for Donald Trump and you vote for life to go on as much as it possibly can despite the pandemic and wait for the vaccine. I think that message of hope and optimism, I think he is in exactly the right place, honestly, I do,” Farage concluded.

Farage: ‘Those Who Bet The House Against Donald Trump Generally Lose’ https://t.co/TNhMvVxBlS