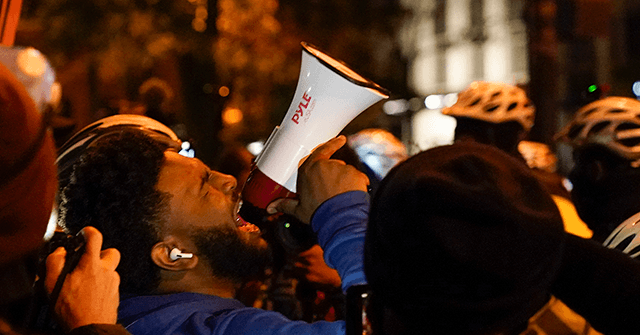 The protester’s denigration of police officers mirrors the “A.C.A.B” (“All Cops Are Bastards”) acronym used by leftists in political messaging via signage and graffiti.

“Drive your bitch ass home!” yelled another female demonstrator as the police officer drove away.

Drew Hernandez shared the video on Twitter as part of a series of reports on left-wing demonstrations in the nation’s capital on Election Day.

In another incident, a demonstrator shouted at a black cop, “You’re a stupid fuck! Fucking coon!”

In July, Biden agreed with a recommendation to “redirect” funding from law enforcement towards other “social services.” He has repeatedly characterized America as a nation plagued by “systemic racism,” echoing political narratives pushed by Black Lives Matter.

In September, Sen. Kamala Harris (D-CA) praised the “brilliance” of the Black Lives Matter movement and its founders in a conversation with the National Association for the Advancement of Colored People (NAACP).

Joe Biden’s Amnesty for Illegal Aliens Is a Legislative Priority

Joe Biden’s Amnesty for Illegal Aliens Is a Legislative Priority