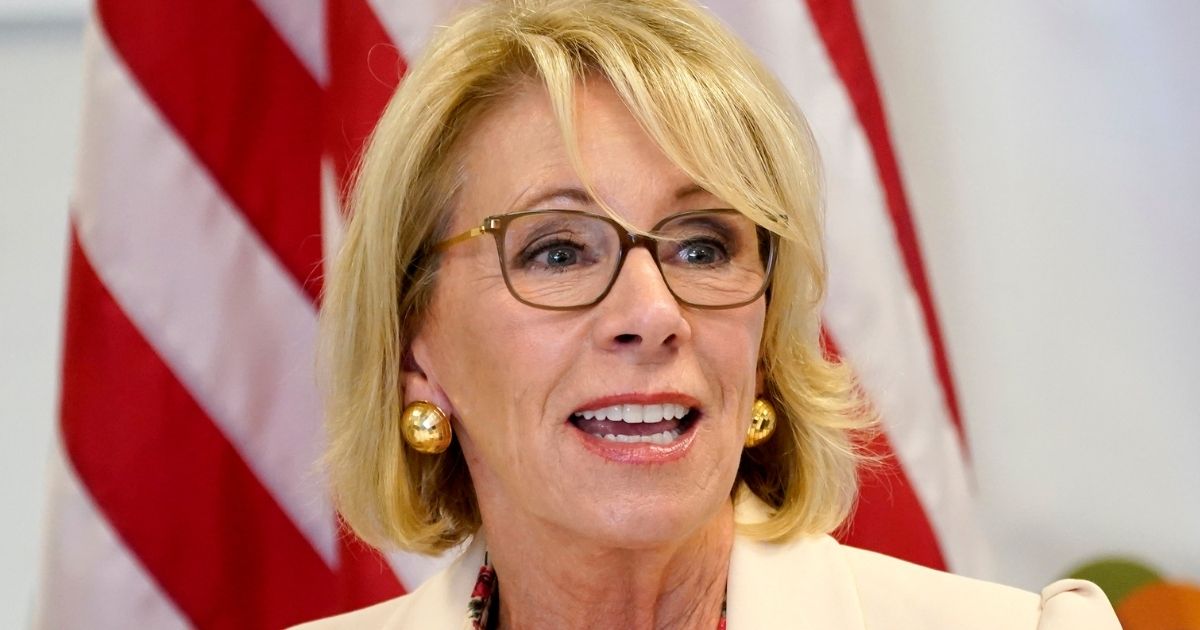 The speech, delivered during the Federal Student Aid Virtual Training Conference, cautioned institutions against encouraging students to pay more than a degree is worth.

“Policies should never entice students into greater debt, nor should they put taxpayer dollars at greater risk. There are too many politicians today who support policy that does both,” DeVos said.

“We’ve heard shrill calls to cancel, to forgive, to make it all free. Any innocuous label out there can’t obfuscate what it really is: wrong. The campaign for free college is a matter of total government control,” she said.

“Make no mistake: It is a socialist takeover of higher education,” DeVos said.

“Now, depending on your personal politics, some of you might not find that notion as scary as I do. But mark my words: None of you would like the way it will work.”

Both loan forgiveness and free public college for families earning under $125,000 a year were popular stump positions for Democrat Joe Biden during the presidential campaign.

“We have a student debt crisis in this country, with roughly more than 44 million American individuals now holding a total of $1.5 trillion in student loans,” Biden’s campaign said in its education plan. “One in five adults who hold student loans are behind on payments, a disproportionate number of whom are black. Thus, student debt both exacerbates and results from the racial wealth gap.”

Should student loan debt be canceled?

“I can send every single qualified person to a four-year college in their state for $150 billion,” Biden said during an interview with CBS’ “60 Minutes” in October. “I can make sure every single person who qualifies for community college can go and we still have a lotta money left over.”

According to the New York Post, his campaign later admitted the number would be double that and said Biden “misspoke.”

However, as DeVos pointed out in her Tuesday speech, “More than two-thirds of Americans don’t pursue a four-year college education. Many pursue different and just as valid paths to gain the skills needed for successful careers.

“It’s fundamentally unfair to ask two-thirds of Americans who don’t go to college to pay the bills for the mere one-third who do.

“And it’s even more unfair to those who have held up their end of the bargain and paid back their student loans themselves to subsidize those who don’t save, plan and pay.”

The line about socialism was pretty much what everyone took away from DeVos’ speech.

Here’s Democrat Rep. Alexandria Ocasio-Cortez of New York, a self-described socialist, going after DeVos’ support for the “capitalist takeover of higher ed, which reliably buries millions of Americans in trillions of dollars in debt”:

Actually, DeVos attacked educational institutions for not being capitalist enough, arguing the price tags they set on degrees — largely unaffordable except with government-sponsored loans — didn’t match the value of the service they were providing.

“Institutions must also take a long look in the mirror,” she said. “The higher education industry needs to deliver products that are worth the price tag.

“And schools have an equally important obligation at the outset to ensure their students don’t take on debt that’s unrealistic based on their future earnings potential. This is as true for so-called nonprofit institutions as it is for any other kind of school.”

It’s worth noting that Biden has yet to announce his choice for education secretary, a pick that will speak volumes about the direction a Biden administration will take if the presumptive president-elect assumes office on Jan. 20. Should Biden choose to prioritize free college and student loan forgiveness, Republican control of the Senate would present another roadblock — although Democratic leadership has argued the president doesn’t need congressional approval for student loan forgiveness.

“Congress, through the Higher Education Act, has already given the President and his Secretary of Education the ability to modify, compromise, waive, or release student loans,” Senate Minority Leader Chuck Schumer of New York and Democrat Sen. Elizabeth Warren of Massachusetts argued in a September news release.

“This authority provides a safety valve for federal student loan programs, letting the Secretary use her discretion to wipe away loans even when they do not meet the eligibility criteria for more specific cancellation programs like disability discharge.”

And it’ll all be paid for by the vast majority of Americans who didn’t go to college. As for those who want to attend college “free,” they might not quite like it, either.

“You won’t like being forced to tell students they aren’t eligible to attend your school, or that they aren’t allowed to choose the degree program they want, or that your quota for ‘free college’ students is full and that they now have to pay full price,” DeVos said.

“In this sense, you are no longer counselors but rationers. You’ll be forced to merely oversee rationing of state-approved higher education options. After all, government doesn’t control anything only halfway.”

I know socialism is popular among the young ’uns these days. Wait until our youthful comrades get their first experience with it.