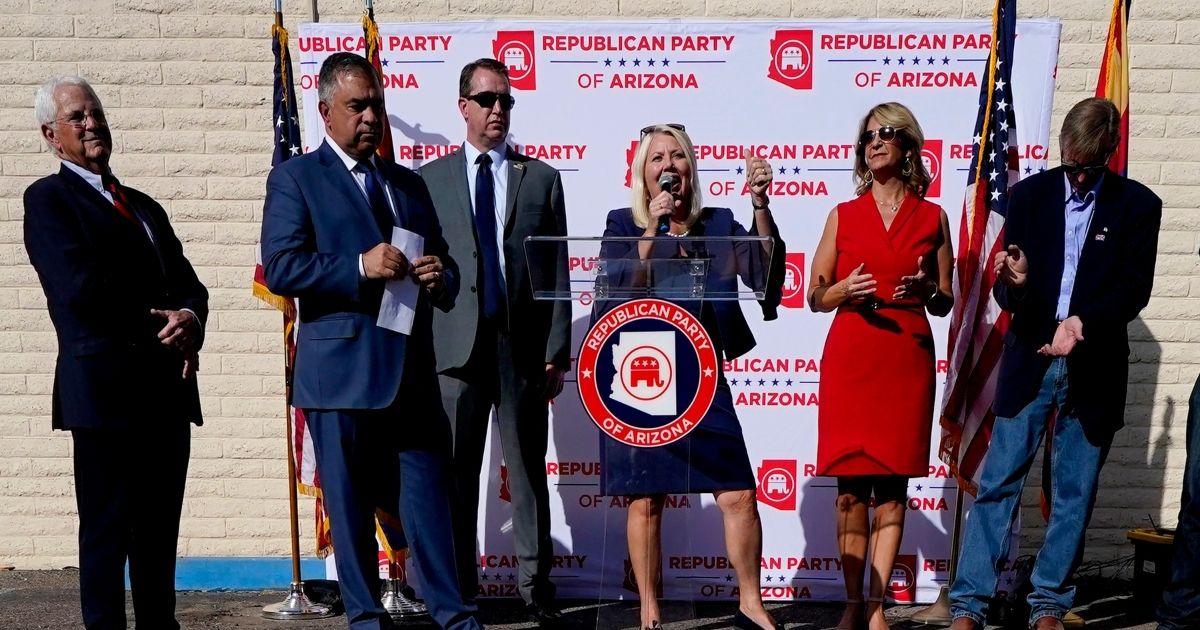 Controversy spun up around such calls as early as election night, when Fox News called the state’s race in favor of the former vice president at 11:20 p.m. with hundreds of thousands of ballots still outstanding in the swing state.

At a Thursday afternoon news conference in Phoenix, Arizona GOP Chairwoman Kelli Ward tore into the Fox News forecast, but refused to lose confidence in claims the state would go for incumbent President Donald Trump when the last legal vote was counted.

“You know, it’s not about Fox. It’s about counting our votes,” Ward said. “And that’s exactly what we are doing.”

“We have the team on the ground. We have the people, we have the momentum, we have the activist community that is not going to allow this race to be stolen from President Trump or from Republicans all the way down the ballot.”

“We are winning this. Stay vigilant. Stay alert,” the chairwoman later added.

Do you think Trump will win Arizona?

“Do not let this election be stolen. I won’t. I know you won’t.”

Trump won the state of Arizona by a margin of roughly 90,000 votes during his first Oval Office bid in 2016.

Once a Republican stronghold, it has become increasingly evident in recent years that the Grand Canyon State seems to be on the fast track to turning into a swing state, according to Politico.

Biden held an early lead over Trump from election night through Thursday evening — an early result that led Fox News and The Associated Press to call the race for Biden.

But efforts to call the race gave way to substantial controversy in conservative circles, as Edison Media Research Inc. data published by The New York Times revealed the president still had a path to victory, with less votes counted than was initially believed and the president slowly making up the difference.

Fox News host Tucker Carlson was one of the first major figures to question the call, suggesting the available vote count did not add up to a certain victory for Biden.

“I’m not privy to the math. I’m not certain how, even after the explanation from [Fox News politics editor] Chris Stirewalt, how that decision was made,” Carlson said.

“I think our viewers trust us, but people are concerned.”

And now you have Tucker Carlson openly pushing back on Fox News calling Arizona for Biden.

“I’m not privy to the math, I’m not certain how, even after the explanation from Chris Stirewalt, how that decision was made… I think our viewers trust us, but people are concerned.” pic.twitter.com/7oizkc0ZFV

Carlson was later joined by more moderate voices as Nate Silver, the founder and editor-in-chief of FiveThirtyEight, said Thursday that outlets who have named Biden the victor in Arizona should have retracted those calls.

“I don’t know, I guess I’d say that Biden will win Arizona if you forced me to pick, but I sure as heck don’t think the state should have been called by anyone, and I think the calls that were previously made should be retracted now,” Silver said.

“For the time being, if you made the mistake (IMO) of calling AZ in the first place, you don’t want being part of what gets Biden over the top to 270,” Silver also tweeted.

For the time being, if you made the mistake (IMO) of calling AZ in the first place, you don’t want being part of what gets Biden over the top to 270. So that leaves out calling based on NV. GA+NV is plausible but GA looks so close as to maybe be recount-bound.

Senior Trump campaign adviser and longtime political activist David Bossie spoke in no uncertain terms about the election night forecasts Thursday, telling The Western Journal that early calls for Biden in Arizona and Virginia were indicative of widespread anti-Trump bias — particularly given establishment media unwillingness to quickly call GOP-led states like Florida and Ohio for the president.

“Did the mainstream media calling some of these states early have impact on what happened in the rest of the country. And I think the answer is very simple yes,” Bossie said. “Look, this is this is not a mistake, folks. They have been against this president. They’ve been against your president from the very first minute four years ago.”

“So we are tired of it. We’re going to fight to the very end. And that’s why Donald Trump’s going to get re-elected because every single one of you is here to fight for him.”

Bossie later put down murmurs of Trump campaign lawsuits in the state, but did not rule out such action in the days to come.

“All of the litigation strategies are currently being thought about and contemplated,” the adviser said. “There’s been no decisions on anything as of yet. … All options are on the table to protect every single legal vote that has been made in Arizona.”

As of Thursday evening, Biden led Arizona by a roughly 2 percentage point margin of about 65,000 votes, with an estimated 86 percent of the vote reported, according to The New York Times.

Professional analyses indicate a Trump comeback would be an uphill battle, but is not yet impossible.