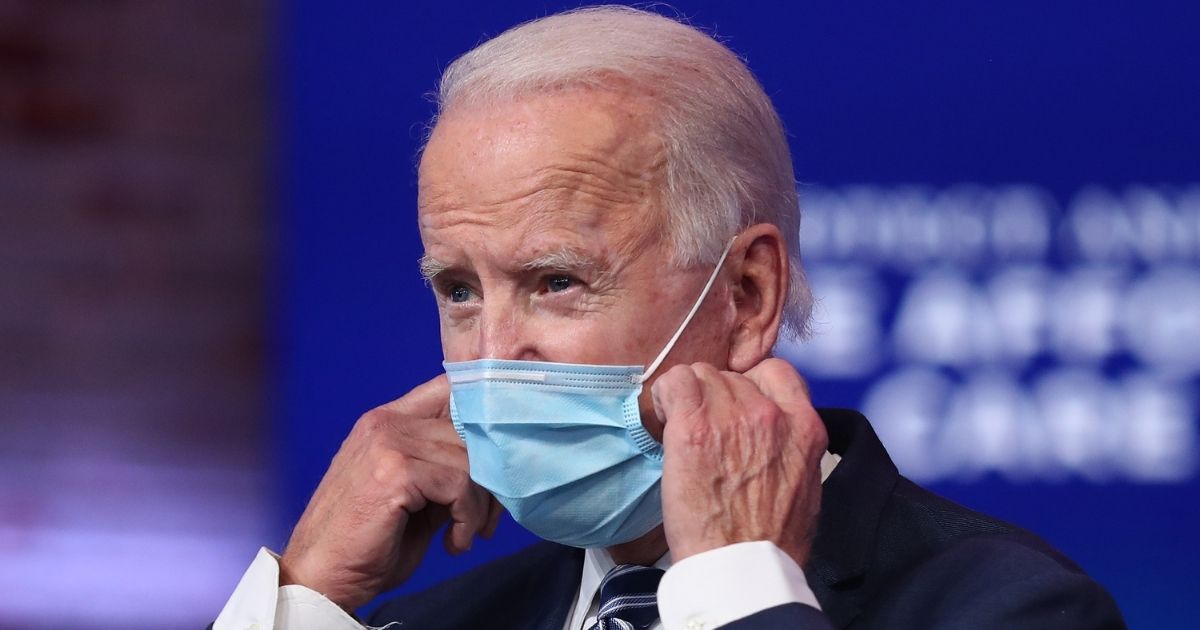 Although former Vice President Joe Biden hasn’t officially won the presidential election, he’s started laying the groundwork for mask mandates in every state, with some Republican governors pushing back.

Biden has hit roadblocks with 16 of the nation’s Republican governors, including Kristi Noem of South Dakota, Kevin Stitt of Oklahoma and Pete Ricketts of Nebraska, Politico reported Friday.

According to the outlet, these governors “say mask wearing should remain a personal choice, not a legal obligation — despite recommendations from health officials and updated guidance from the Centers for Disease Control stressing that masks protect the wearer, not just people nearby, from infection.”

Noem spokesperson Ian Fury told Politico that the governor “has provided her people with the full scope of the science, facts, and data regarding the virus, and then she has trusted them to exercise their personal responsibility to make the best decisions for themselves and their loved-ones.”

Stitt called mask-wearing “a personal responsibility” at a recent news conference. He still believed Oklahomans would wear masks without mandates.

Ricketts also pushed back that he “would not be going along with a mask mandate” should Biden be installed as the next president.

Noem tweeted in October that residents in her state “shouldn’t be shamed” into masking.

“We need to respect each other’s decisions,” she added.

Stitt has advocated for masks when social distance can’t be maintained.

Oklahomans, we must continue to do our part to slow the spread of #COVID19. Keep washing your hands, watching your distance and wearing a mask when social distancing isn’t possible or visiting indoor public places.

“I think what we have to do is continue to educate people about when you use a mask.”

Ricketts adopted mandates for locations where social distancing is difficult like hair salons and restaurants “when people aren’t drinking or eating.”

Politico reported that some Republican governors have imposed mask mandates, including Indiana’s Eric Holcomb and Alabama’s Kay Ivey. Utah’s Gary Herbert just recently ordered one “when it became clear this month that his state’s hospitals were overwhelmed.”

Should Biden be elected and is unsuccessful in convincing the governors, he plans to approach leaders at the county and municipal levels.

“A mask is not a political statement — but it is a good way to start pulling the country together … It’s to give something back to all of us: a normal life,” he said.

On Election Day, Noem tweeted a Fox interview in which she expressed her concerns about Biden’s plans to shut the nation down if elected, an authority she said he doesn’t possess.

She also referred to the coronavirus as a media tool to instill fear and “push an agenda.”

.@realDonaldTrump gave governors the flexibility to do our jobs during the COVID-19 pandemic. And that’s why he should have 4 more years.

Joe Biden said he would overstep his authority and shut down our country. pic.twitter.com/W2AWxwdoKt

“People deserve to have the facts; they also deserve to be trusted and to use personal responsibility to protect their family’s health, but also to keep their businesses open,” Noem said.