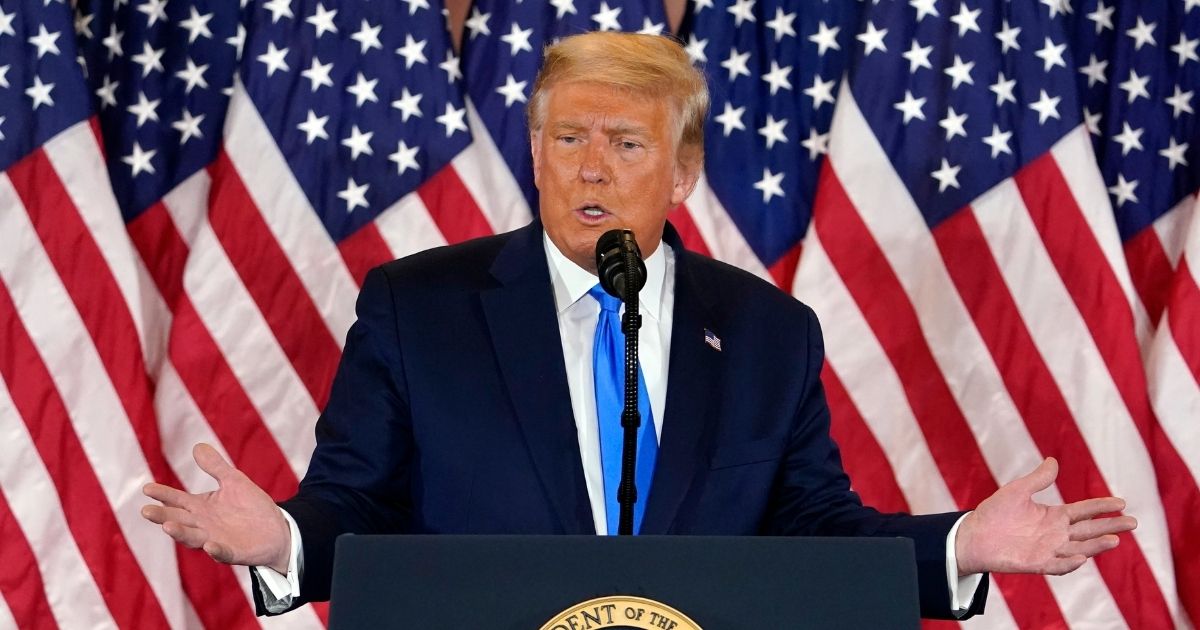 Half of President Donald Trump’s posts on Facebook and Twitter have been censored by Big Tech giants in the wake of Tuesday’s still-contested election.

Democratic presidential hopeful Joe Biden already has the complete loyalty of the establishment media, which views itself as the decision-maker with regard to the election.

The New York Times on Monday published — then deleted — a Twitter post stating that the election’s winner came down to the “News media.”

Biden appears free to tweet and speak completely unrestrained by the media, which has completely lost its credibility.

The media seems primed to crown Biden as the victor, despite what one would assume are numerous legal challenges ahead.

The media won’t give Trump a fair shake in its coverage.

None of this is at all surprising.

Do you think Big Tech is acting with Democrats to undermine President Trump?

But Big Tech, which has shown that it is in the tank for the Democrats since long before Tuesday’s election, is doubling down on silencing the president.

The heads of Google, Facebook and Twitter all testified before a Senate committee last week, but apparently attempts to force the San Francisco liberals to justify their previous acts of blatant censorship of the Biden family business scandal were toothless.

Neither Twitter nor Facebook will allow the president to speak online, in many instances, without censoring him.

Additionally, many online who share Trump’s posts, or the posts of those closest to him are being censored.

It’s all so Orwellian.

According to Forbes, Trump has posted on social media 22 times since Tuesday night, minus retweets on Twitter.

Of those 22 posts, 11 of them have been slapped with warning labels, claims to social media users that the country’s president is being untruthful — as if Silicon Valley and its supposedly independent fact-checkers are any authority on a national election.

For example, Trump tweeted on Thursday morning, “All of the recent Biden claimed States will be legally challenged by us for Voter Fraud and State Election Fraud. Plenty of proof – just check out the Media. WE WILL WIN! America First!”

Likewise, Facebook is hard at work trying to discredit a president bogged down by a system that has sandbagged him with a narrative he is losing an election in which there are at the very least the widespread appearance of irregularities.

Trump posted Thursday on Facebook, “ANY VOTE THAT CAME IN AFTER ELECTION DAY WILL NOT BE COUNTED!”

ANY VOTE THAT CAME IN AFTER ELECTION DAY WILL NOT BE COUNTED!

Facebook quickly put a label on the post alerting, “Final results may be different from the initial vote counts, as ballot counting will continue for days or weeks after polls close.

As of Thursday, the president is challenging what appear to be large-scale voting irregularities by beginning to wage court battles.

But Trump is being undercut with his ability to manage his messaging or to counter liberal narratives, which could be crucial this point, even though the votes have already been cast.

Trump’s inability to speak freely is a major problem in a climate where public trust of institutions is at a low point.

There is a national outcry with regard to what has occurred in states such as Arizona, Pennsylvania and Michigan.

The establishment media is not making it a priority to report any of this.

Voters showed up in record numbers to cast ballots for the president on Tuesday, and two days later, as the integrity of the bedrock principle of clean voting has taken a hit in many minds, some of those voters are not being permitted to hear the country’s sitting president speak without the Big Tech’s restraints.

If Democrats and the leftist institutions they run truly cared a lick about election integrity, then the president’s inability to speak unfiltered must be of bipartisan concern.

The president is expressing valid complaints, and in an act of election interference, he’s being undermined.

The integrity of American elections is actively being questioned by countless Americans, and so is a perceived coordinated effort to silence messages about it from the leader of the Free World.

Many voters rightly don’t trust the media, and they don’t trust Silicon Valley, which is essentially telling them Trump can’t be trusted to speak to them without them acting as his editor.

That leaves Americans desperate for truth during a contested election in a precarious position.

Where are people supposed to turn to for information?