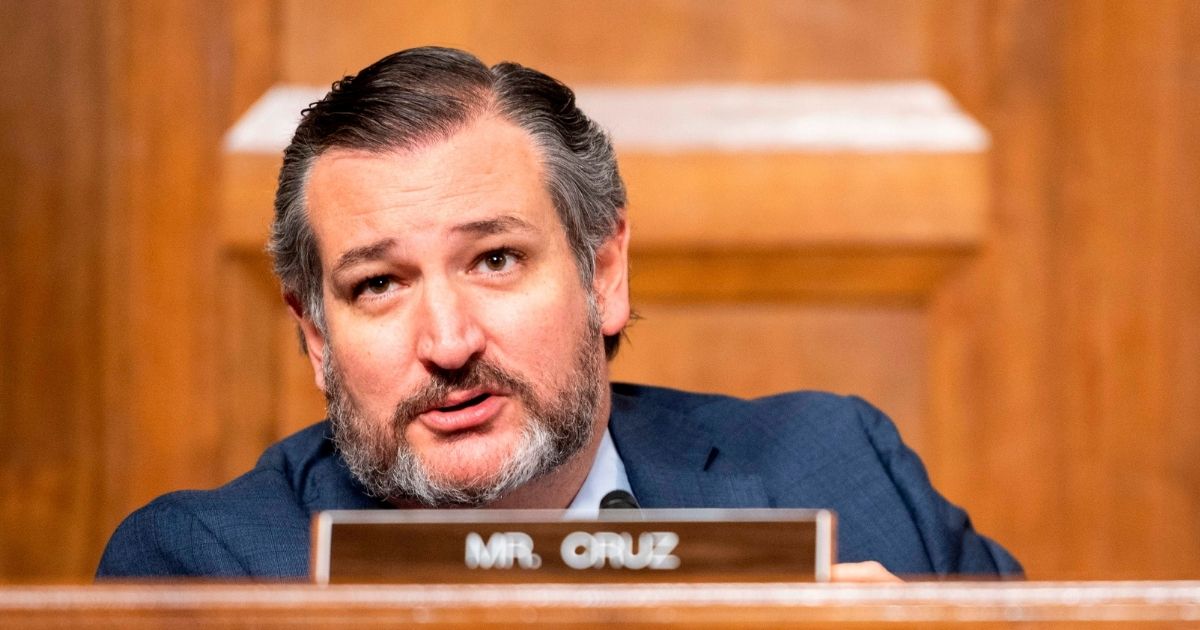 Republican Sen. Ted Cruz of Texas rightly called out Sen. Sherrod Brown for engaging in “idiotic” virtue signaling after the Ohio Democrat chastised GOP colleague Sen. Dan Sullivan of Alaska for not wearing a face mask on the Senate floor.

On Monday, Brown and Sullivan, who was presiding over the chamber, had a testy exchange over the issue.

“I’d start by asking the presiding officer to please wear a mask as he speaks,” Brown said, adding, “I can’t tell you what to do, but I know that the behavior–“

Sullivan, who just successfully ran for re-election to a second term, interjected, “I don’t wear a mask when I’m speaking, like most senators.”

“So I don’t need your instruction,” the Marine Corps combat veteran added with a stern look on his face.

“I know you don’t need my instruction,” Brown responded, “but there clearly isn’t much interest in this body in public health. We have a president who hasn’t shown up at the coronavirus tasks force meetings in months.”

The senator continued by hitting Senate Majority Leader Mitch McConnell for calling the legislative body into session to vote for “judge after judge after judge,” but not passing COVID-19 legislation.

Confirming judges is actually a perfectly good and right reason to call the Senate into session, while the lack of further COVID relief can be put squarely on the shoulders of House Speaker Nancy Pelosi and Senate Democrats, who won’t allow a clean bill, without “poison pills” like blue-state bailouts, to even get an up-or-down vote.

“Once again, I asked my Republican colleagues to stop endangering all the Senate workers – and simply wear a mask when presiding over the Senate. Once again, they refused,” Brown later tweeted.

Cruz found the Democrat’s melodramatic grandstanding to be a bit too much.

This is idiotic. @SherrodBrown is being a complete ass. He wears a mask to speak—when nobody is remotely near him—as an ostentatious sign of fake virtue.@DanSullivan_AK was over 50 feet away, presiding. Last I checked 50 feet is more than 6 feet. https://t.co/BoIGrAV7T1

“This is idiotic. @SherrodBrown is being a complete ass,” Cruz tweeted. “He wears a mask to speak — when nobody is remotely near him — as an ostentatious sign of fake virtue.”

“@DanSullivan_AK was over 50 feet away, presiding. Last I checked 50 feet is more than 6 feet,” Cruz added.

While Sullivan did appear to be only a few feet away from a Senate staffer, Cruz’s larger point stands: Brown was using his mask as a virtue signal.

Additionally, according to The Washington Post, “Sullivan wore his mask while Brown addressed the floor, but took it off again after Brown was done to adjourn the Senate.”

Brown also accused Republican senators, apparently including Sullivan, of feeling like that they have to “humor the outgoing president” by their votes and actions.

McConnell responded to the criticism about the Senate not voting on the House’s COVID legislation, the $3.4 trillion HEROES Act passed in May, which was brought down to $2.2 trillion in a second vote in October.

“House Democrats’ so-called ‘HEROES Act’ is so unserious that it was condemned by the Speaker’s own moderate Democrats the instant she put it out,” McConnell tweeted.

House Democrats’ so-called “HEROES Act” is so unserious that it was condemned by the Speaker’s own moderate Democrats the instant she put it out.

Huge tax cuts for rich people in blue states, but no second round of the Paycheck Protection Program? Those are their priorities?

“Huge tax cuts for rich people in blue states, but no second round of the Paycheck Protection Program? Those are their priorities?” the Senate majority leader asked.

Dr. Fauci Admits His Wearing Masks Indoors Despite Being Vaccinated Was...