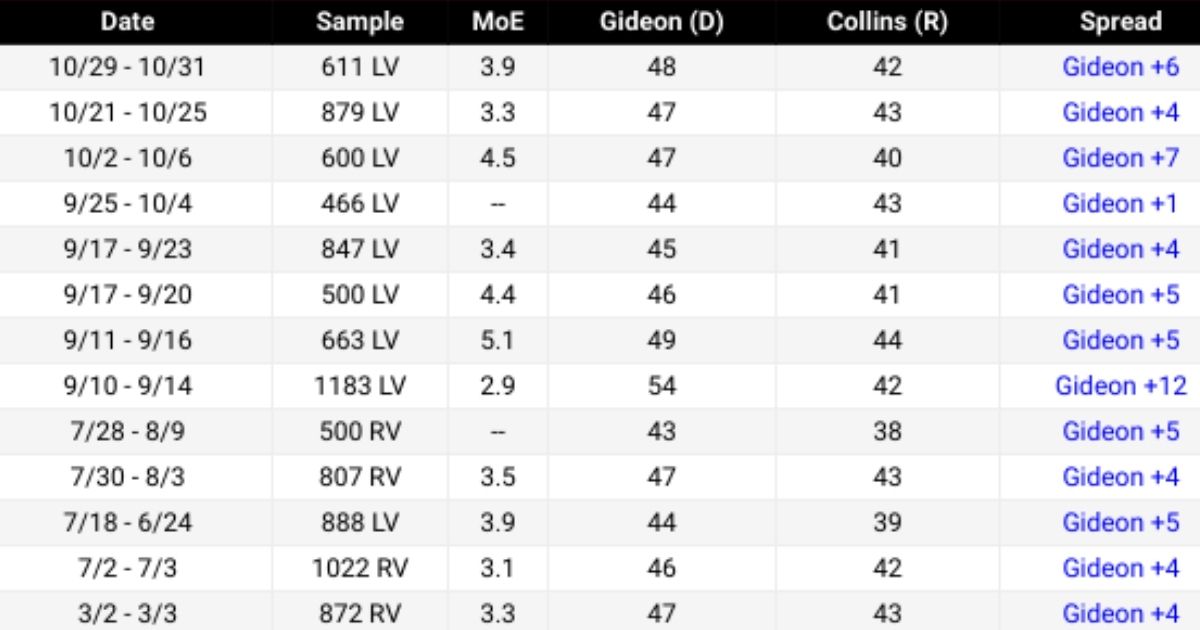 With a neck-in-neck 2020 presidential race continuing to tighten, substantial doubt is being cast on the American polling apparatus.

The most notable hiccup in the pre-election polls, however, came not on the path to Pennsylvania Avenue, but on a down-ballot race in left-leaning Maine.

According to the Maine Public Broadcasting Network, incumbent Republican Sen. Susan Collins has successfully fended off a serious challenge to her long-held seat, securing a fifth term in the Senate.

“I just received a very gracious call from Sara Gideon conceding the race,” Collins said in a public address Wednesday.

“I feel like this is an affirmation of the work that I’ve been doing in Washington to fight for the people of Maine every day,” she also said.

As of Thursday morning, Collins was leading Democratic challenger Sara Gideon by roughly 53,000 votes with 84 percent of the total in, The New York Times reported.

Do you think the polling industry will suffer as a result of the 2016 and 2020 presidential elections?

The numbers represented a 7 percentage point lead, and flew in the face of polling which forecast Gideon carrying the state by margins of up to 12 percentage points this fall, according to RealClearPolitics.

Between Sept. 10 and Oct. 31, respected pollsters at Emerson, Quinnipiac, Boston Globe/Suffolk and New York Times/Siena came up short in a big way, having projected Gideon to win by at least 5 percentage points.

Not a single survey in the RealClearPolitics polling average showed Collins winning.

The upset victory comes little more than one week after the confirmation of Supreme Court Justice Amy Coney Barrett — a process in which the moderate senator broke with her 52 GOP colleagues, becoming the only member of the Senate to vote outside party lines in opposition to President Donald Trump’s nominee.

Collins’ decision to stand in opposition was supposedly a matter of principle rather than distaste for the nominee, however, fueled by the desire to deny major election year Supreme Court nominations, as was done with Obama-era Supreme Court nominee Merrick Garland.

It was apparently the right play, doing little to demotivate the senator’s Republican base Tuesday, and potentially helping her make inroads with independent and centrist Democratic voters (though you wouldn’t be able to tell from the polls conducted in the days leading up to the election).

Not a single poll public poll of Maine released since February showed Susan Collins ahead in her Senate race. Quinnipiac’s last poll in the state said Collins would lose by 12.

And Maine is not the only location on the electoral map to struggle with accurate polling.

Though broader national polls projecting victory for 2020 Democratic nominee Joe Biden may yet be correct with portions of the Rust and Sun Belts still in play for both candidates, vast swaths of state-to-state survey data seem to have been just as inaccurate this year as they were in 2016.

Heck, even potentially correct national polls will be looked on with skepticism going forward, as a great many projected double-digit margins for the former vice president.

Republicans also look as though they may be able retain control of the Senate, having already made considerable gains in the House of Representatives in spite of data-based claims a nationwide blue wave was in the works this cycle.

Sure hope none of the academics out there were hanging hopes of tenure on these results.