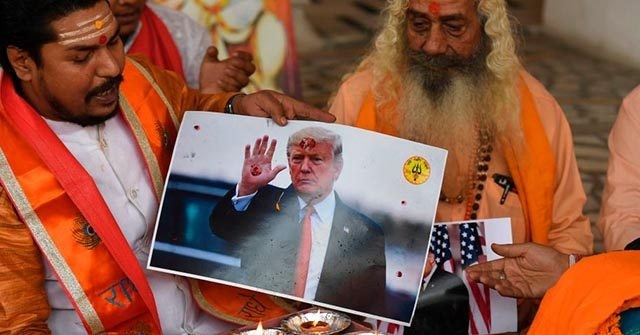 Joined by a Hindu priest dressed in saffron robes, over a dozen members of the group sat around a ritual fire in a Hindu temple to offer a special prayer for Trump’s reelection, according to video footage of the ceremony published by Reuters.

The men held portraits of the U.S. president and his ally, Indian Prime Minister Narendra Modi. A Hindu priest applied tilaka, or a red ritual paste, to a photo of Trump, marking his forehead as he would in real life. The tilaka ceremony is a Hindu blessing meant to bestow good fortune, health, and longevity on those who receive the mark.

“Long Live!” replied the rest of the members.

Hindu Sena claims to have the support of five million Hindus, and “says it wants Trump to be re-elected in order to keep India’s main rivals – Pakistan and China – in check,” according to Reuters.

“India can fight terrorism only if Trump is around, and both China and Pakistan will stay restrained as long as he is the president,” Hindu Sena’s founder, Vishnu Gupta, told the news agency by phone on Tuesday.

Tuesday’s special ceremony lasted for approximately 30 minutes and included the “[c]hanting of special mantras and a havan” or Hindu fire ritual, according to India Today.

The Hindu priest who presided over the ceremony, Ved Shastri, told India Today TV on Tuesday that “Donald Trump has been vocal against Islamic radicals and it is time for the world to support him in the U.S. presidential elections.”

“Even for his [Trump’s] last election [in 2016] we sought blessings for his victory. This time again we are seeking blessings for Donald Trump’s victory in the US presidential elections. His winning will not only be victory for the world, but also for India as US has been a good ally for us against China and Pakistan [sic],” Shastri told the news outlet.

Hindu Sena celebrated Donald Trump’s birthday in June 2017 by cutting a 15.5-pound cake at a ceremony in New Delhi. On the occasion, the group “wished Mr. Trump to ‘live longer with happiness and peace,’ adding that the ‘relationship between India and America is very good’ and ‘should improve further’,” the Hindu reported.