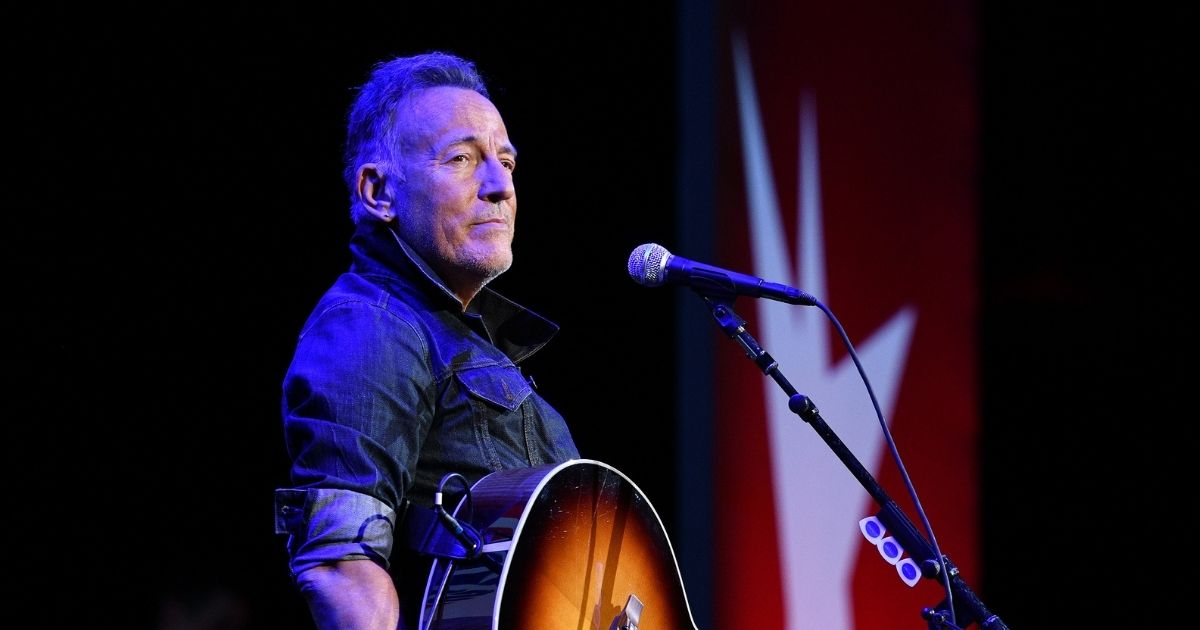 Left-wing rocker Bruce Springsteen was recently arrested on multiple charges, including for DWI, according to a report.

TMZ reported Wednesday that the 71-year-old was arrested on Nov. 14 at Gateway National Recreation Area in Sandy Hook, New Jersey. The “Glory Days” singer was cited for reckless driving, consuming alcohol in a closed area and driving while intoxicated.

Somehow the news never made it into the headlines. But the ever-so-virtuous, holier-than-thou musician is in the news this week, so there’s probably a connection there.

Springsteen was featured in a Super Bowl commercial for Jeep on Sunday in which he pontificated some vague message about unity. The leftist favorite son of New Jersey (sorry, Jon Bon Jovi), drove a Jeep and blathered on for two minutes in deep-red Kansas, of all places, about meeting in “the middle.”

TRENDING: Schumer and AOC Team Up to Announce Taxpayers Now on the Hook for COVID Funerals, Including for Illegal Immigrants

“It’s no secret the middle has been a hard place to get to lately, between red and blue, between servant and citizen, between our freedom and our fear,” Springsteen said in the Jeep ad, which showed a small church. “Now fear has never been the best of who we are, and as for freedom, it’s not the property of just the fortunate few; it belongs to us all.”

“Whoever you are, wherever you’re from, it’s what connects us, and we need that connection. We need the middle,” the rocker said.

The wealthy leftist still likes to portray himself as being not unlike the working men and women of this country — those whose jobs are being killed by all of those unifying executive orders being signed by President Joe Biden at a record pace.

Do you wish more celebrities would keep their opinions to themselves?

Where was “The Boss” during last year’s Super Bowl — you know, when former President Donald Trump could have used a bit of help unifying a country being ripped apart at the seams by leftist rhetoric about harassing conservatives?

Springsteen’s “working stiff” routine has grown stale. The man is a troglodyte who emerged from under his $500 million nest egg three weeks after Biden was inaugurated in order to call for unity after his side of the aisle just spent four years undermining a duly elected president.

Now, the man who likes to portray himself as some kind of working-class Joe wants to talk about meeting in the middle — going as far as to use a Jeep in a place like Kansas as symbolism to remind us how much he wants unity. Will Jeep employees even have jobs soon, or will Fiat Chrysler Automobiles send those jobs overseas? Where in Kansas is Springsteen’s quaint property located?

People like Springsteen often view places like Kansas as flyover country to look down on when traveling from one coast to another. Meanwhile, working people in Kansas and other states could tragically soon be out of work because of failed ideas such as the ones Springsteen believes in.

The singer and songwriter shared some of his beliefs last June with The Atlantic as leftist rioters torched American cities with impunity amid a pandemic that kept churches closed.

RELATED: Dolly Parton Wouldn’t Accept the Medal of Freedom from Trump and Probably Won’t from Biden – Here’s Why

It appears COVID was taking Springsteen to Kansas to put on a disingenuous corporate display about unity in a state filled with a whole lot of people who would love nothing more than their jobs and to be left alone by big government and coastal elites like him.

Springsteen made other comments to The Atlantic that were anything but unifying, by the way.

“I believe that our current president is a threat to our democracy,” he said of Trump. “He simply makes any kind of reform that much harder. I don’t know if our democracy could stand another four years of his custodianship. These are all existential threats to our democracy and our American way of life.”

How about this message from Springsteen from October, as reported by Fox News: “It is time for an exorcism in our nation’s capital. … In just a few days, we’ll be throwing the bums out. I thought it was a f—ing nightmare but it was so true.”

The attack on the Trump family certainly sounds a lot like incitement. Maybe the Democratic House of Representatives should draw up an article of impeachment, seeing as how people who aren’t president can now be impeached.

That precedent is being set.

Listen to this unhinged pre-election poem recited by Springsteen in which he attacked Trump because the former president did not own a dog.

Springsteen has spent decades pretending to be some altruistic cross between the liberal elitist he is and the average guy he apparently wants everyone to view him as. If reports are true, he can’t even be trusted behind the wheel of a motor vehicle without getting plastered and driving recklessly.

Those of us who don’t buy into the left’s phony culture of celebrity and virtue signaling got the message: We’re supposed to buy into the idea that Springsteen is the voice of reason — and then buy a Jeep.

The “Hungry Heart” singer just appeared in a pretentious corporate auto ad which portrayed him as the conscience of the country. According to TMZ, Springsteen at the time it aired didn’t even possess the judgment to be handed a set of car keys.