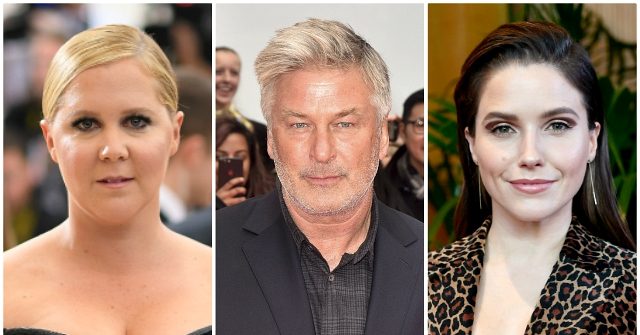 How much do Hollywood stars really care about Georgia? Here is one indication: Some of the same celebrities who threatened to boycott Georgia over its so-called “fetal heartbeat” abortion bill are now carpetbagging their way through the Peach State to support Democrat candidates for the Senate runoffs.

They were ready to abandon Georgia in a literal heartbeat. Now they want to tell Georgians how to vote.

Stars including Alec Baldwin, Alyssa Milano, Amy Schumer, Sophia Bush, Patton Oswalt, and Debra Messing have all voiced their support for Democrat challengers Jon Ossoff and Raphael Warnock, urging Georgians to vote blue on January 5 and flip the Senate. But these same stars also backed the Georgia boycott nearly two years ago, signing a letter supporting the withdrawal of TV and movie productions unless Gov. Brian Kemp reconsidered the bill that would outlaw abortion after a fetal heartbeat is detected.

The boycott, which was also backed by major studios including Disney and Netflix, would have meant the loss of thousands of production jobs — mostly blue collar crew workers who toil long hours behind the camera. Georgia is Hollywood’s favorite filming location due to the state’s generous tax credits, luring lucrative shoots including AMC’s The Walking Dead; Marvel movies such as Black Panther and Ant-Man; and Netflix’s Hillbilly Elegy.

“Now we take Georgia, then we change the world,” Chuck Schumer via @StatusCoup pic.twitter.com/JMtGPzgZUH

Georgia is now ground zero in the battle for the balance of power in Washington, D.C., as control of the U.S. Senate now hinges on the outcome of the two Senate runoff races in the Peach State. With the Senate majority leadership within his reach, Sen. Chuck Schumer (D-NY) recently declared, “Now we take Georgia, and then we change America.”

Alyssa Milano was one of Hollywood’s biggest Georgia boycotters, aggressively publicizing a letter in which 50 celebrities threatened to “do everything in our power to move our industry to a safer state for women” if their demands weren’t met.

To @BrianKempGA & Speaker Ralston:
Attached, is an open letter signed by 50 actors against #HB481. On behalf of the undersigned–as people often called to work in GA or those of us contractually bound to work in GA–we hope you’ll reconsider signing this bill. #HBIsBadForBusiness pic.twitter.com/DsOmAWYU2x

Milano is now on the frontline of Georgia’s runoff battle, frequently tweeting her support for Ossoff and Warnock.

One Tree Hill star Sophia Bush was among the 50 signatories of the Georgia boycott letter. The actress is now a leader of Win Both Seats, an initiative to get out the minority vote for Democrats.

In less than 72 hrs, we’ve raised $1,033,528 for Black + Brown led organizations working in Georgia to #WinBothSeats! So proud to be a co-founder of this campaign!

Alec Baldwin signed the boycott letter and is now hoping for an Ossoff-Warnock double victory on January 5.

If Osoff-Warnock prevail, then Senators from a state that has strained to disenfranchise black voters will force a tie in the Senate that would then be broken by…
a black woman.

Comedian Amy Schumer — who is a cousin of Sen. Schumer — supported the Georgia boycott and recently hosted a Democratic voter mobilization event for Georgia.

Comedian Patton Oswalt is another Georgia boycotter who is now using his influencer status to sway how Georgians vote.

THANK YOU!🔥🔥 @sagaftra You MUST stand with your women members! This is a SAFETY issue. If a member miscarries while filming she could be prosecuted for 2nd degree murder. Put in PRISON. You MUST protect your female members ASAP. #Georgiaabortionlaw #SAGAFTRA https://t.co/xBPEz7AqIu

#Georgia you have the power to hire Senators who are ON YOUR SIDE.

How Far Will It Go? Here’s How Many Masks Experts Want You to Wear

How Far Will It Go? Here’s How Many Masks Experts Want...