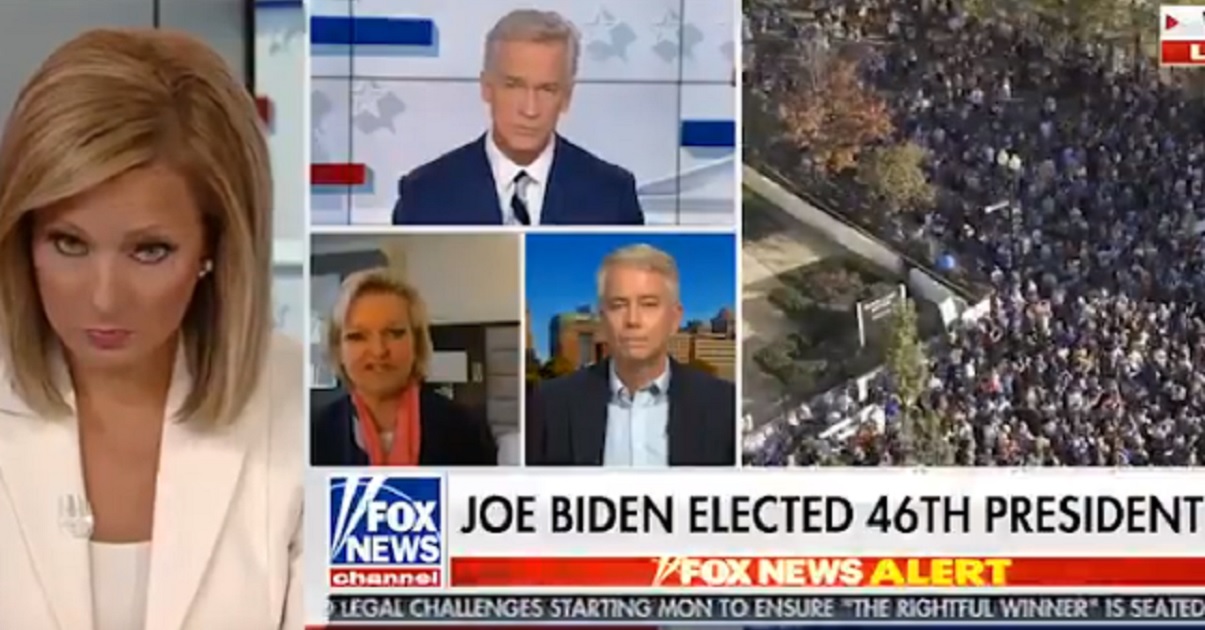 Fox News has come under intense scrutiny in recent weeks, and many once-loyal fans are vowing to tune out in droves over its handling of the election.

But as if things weren’t already bad for the embattled network that built a reputation for attracting patriotic Americans and conservatives, one of its most prominent faces was shown Monday demonstrating disdain at any assertion that the media — and Fox — doesn’t choose the president.

Sandra Smith, who hosts “America’s Newsroom,” actually rolled her eyes in mockery when a Fox News guest reminded viewers Saturday that the mainstream media is not the Eye of Providence with regard to deciding election results.

The clip was obtained by Timothy Burke of The Daily Beast:

Sandra Smith, off-air, reacts to her colleague Trace Gallagher indulging a nutjob who denies the outcome of the election even after Fox News had called it for Joe Biden: pic.twitter.com/gZ4nrnVHab

Conservative attorney Cleta Mitchell was speaking with Fox News veteran Trace Gallagher when she reminded the public that, despite the mainstream media’s decision to collectively crown Democrat Joe Biden as president-elect Saturday, the decision isn’t up to them.

Mitchell rightly said, “I think everybody wants to know that this was done properly and legally and we can trust the results.”

Mitchell, who was referring to the fact that the election is still contested, and will make its way through the courts, added, “And I think we have to look into every one of these [voting irregularity] concerns.”

Added the attorney, “Remember, just because CNN says, or even Fox News says that somebody’s president doesn’t make them president.”

Who is Mitchell to challenge the media’s authority as kingmaker?

Smith, who was not on the air at the time but still being recorded in-house, reacted in a manner that leaves little doubt about where she stands with regard to valid concerns that calling the presidential race for Biden was too soon.

With rolled eyes and a grimace, Smith showed everyone how appalled she was that Fox News’ authority was being challenged.

“What?” Smith said with an exaggerated, dumbfounded look on her face.

The Fox News host added, “What is happening? Like, Trace, we’ve called it.”

The U.K. Daily Mail reported that Fox News has not commented on the leaked clip.

Sandra Smith thinks FoxNews calling the election means Biden is President. Forget that pesky Constitution… happy to be considered a nut job because I believe in the rule of law https://t.co/yU007yUj9n

One thing is clear: Fox News is not the friend to seekers of balanced coverage it once was, which is a sad fact.

Arizona, which Fox called for Biden about 11:20 p.m. Eastern on Election Day, just over two hours after polls had closed in Arizona, had still not been called by far-left CNN as of Tuesday morning, a week after the election.

Another sign of the Murdoch media world tug-of-war I’ve been describing: Neil Cavuto cut off Kayleigh McEnany on his show while OTHER Fox shows are promoting the same kind of B.S. she was pushing pic.twitter.com/b5Zl8VWqQh

Sure, Tucker Carlson is a national treasure, as are Sean Hannity, Jeanine Pirro, Laura Ingraham, Jesse Watters and other Fox personalities.

But frustrated viewers often have to sit through liberal voices like Juan Williams and Donna Brazile to get to must-see TV commentaries by Greg Gutfeld.

But if Chris Wallace, the Fox News decision desk and Smith’s grimace at being questioned over the mainstream media’s authority to choose the president didn’t do it for you, perhaps this tweet from Sarah Murdoch, the wife of Murdoch media empire heir James Murdoch, will.

This bottle has been chilling for four years. #VicePresidentElectHarris pic.twitter.com/TEVeliqsnC

Or maybe this tweet from Kathryn Murdoch, the wife of Fox Corp CEO Lachlan Murdoch, will.

Fox News seems to be a rudderless ship that has apparently abandoned its core audience in favor of appointing a “president-elect” Biden over reporting facts.

The simple facts are that, for right now, Biden is still only the president of his basement, and Fox News seems to be holding its loyal viewers in contempt.

Olympian Suspended for What He Did After Realizing He Might Have...