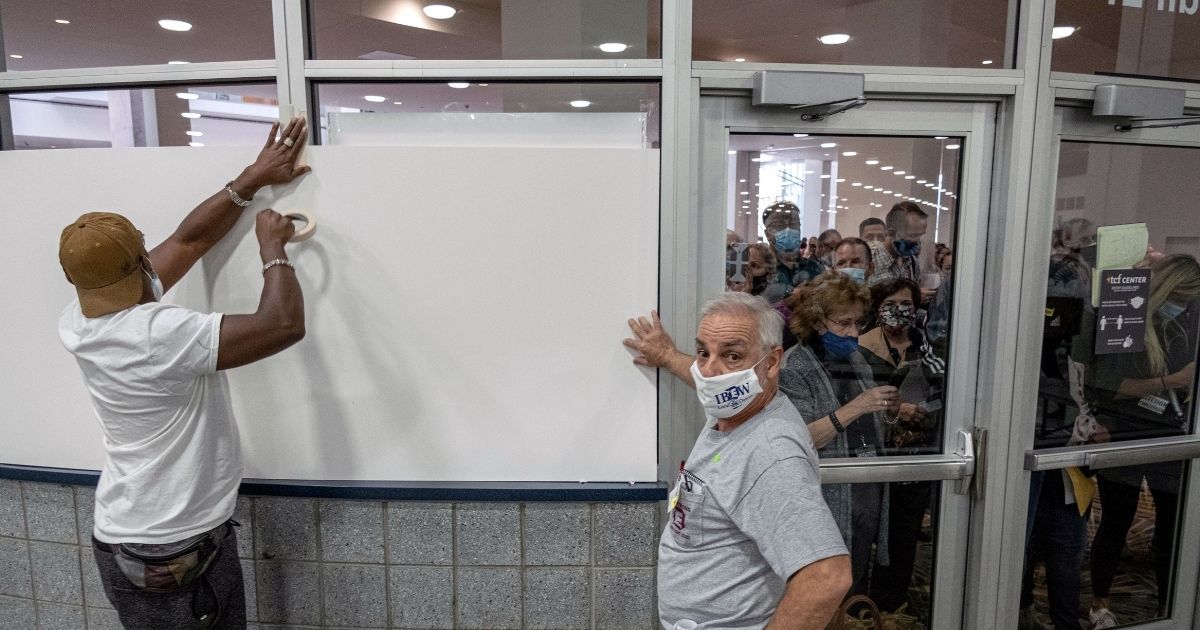 The problem was that according to the Trump campaign, election officials ignored the order and Philadelphia Sheriff Rochelle Bilal refused to enforce it.

Bondi told reporters, “They are still not in compliance. … They have moved the barrier up to six feet, but they took away the ballot machines that were in the front row and moved them to the back of the building.”

“It’s unbelievable what they are trying to do to our votes that have been legally cast,” Bondi said. “They are defying a court order by a judge and this is not the last of this.”

Lewandowski added, “They have eight attorneys fighting us to see these ballots inside. The court order is in effect. They will not give us access and the sheriff has decided not to come down here to enforce that court order.”

In recent days, multiple observers have said they were forced to stand up to 100 feet away while watching the ballots being counted, the Trump campaign said, according to The Epoch Times. Now, unless an observer has eagle eyes, it’s impossible to read a ballot from even 10 feet away.

Following the judge’s order, the Philadelphia City Commissioners appealed the ruling to the Pennsylvania Supreme Court and requested an emergency review. They argued that the ruling “is wrong, and because it jeopardizes both the safety of the City Defendants’ canvass, plus the privacy of voters, immediate allowance of appeal is warranted.”

Considering that 20 electoral votes are at stake and the U.S. presidential election may be decided on the outcome of the votes these election workers are processing, the Trump campaign is right to fight this. Yet, Democrats are indignant that Republicans don’t trust officials in Democrat-run cities like Philadelphia to deliver a truthful result.

Should we trust people who allegedly defy a court order?

After the Steele dossier, a bogus three-year Russia collusion hoax, the impeachment sham and all of the other ways Democrats have tried to destroy President Donald Trump, is it any wonder we don’t trust them?

Conservative radio host Rush Limbaugh touched on this issue during his show Thursday.

“Trump has to litigate, he has to go to court to get Republican observers to watch the count,” Limbaugh said, according to a transcript on RushLimbaugh.com. “We have to go to court. We have to ask a bunch of judges, ‘Judges, we need to really observe what’s going on in there. We’re entitled to observe this count. You make them. You make them let us in.’

“OK. So why are the Democrats in Philadelphia fighting it? I mean, if there’s no cheating going on, if everything’s aboveboard and if Trump’s going to lose and he’s going lose legitimately and you just better get your arms around it, why not let the Republicans in and let them see Trump losing legitimately? Why are they afraid of this?”

“If they’ve got nothing to hide, why defy state law and prevent Trump election observers in there to watch? I mean, they’re clearly fighting this, the Democrats are in Philadelphia. Why?” he said.

“If they’re so confident Trump’s going to lose this, why not let Trump’s election people in there and witness the defeat? Yeah, how humiliating would that be? But they don’t want anybody watching what’s happening here.”

He is exactly right.

Maybe there are logical explanations for what is happening in Philadelphia. However, if election officials have nothing to hide, why were they allegedly refusing the comply with the court order?

There is far too much riding on the outcome of this election to turn the other cheek.

We’ve witnessed the depths to which many Democrats have stooped over the past four years. They have shown us what they’re capable of on many occasions.

As President Ronald Reagan taught us, “Trust, but verify.”