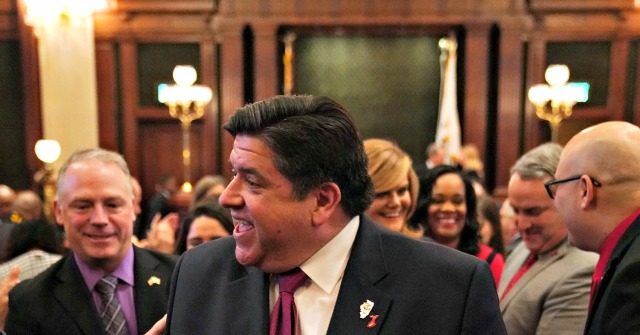 Illinois’ Democrat Gov. JB Pritzker is once again making grave proclamations about shutting his state down due to the coronavirus. Still, despite the draconian measures to “save lives,” the governor was also seen partying in crowded Chicago streets last week celebrating Joe Biden’s purported 2020 election win.

Photos of the gov. partying with Chicagoans showed up on Twitter as people remarked on Pritzker’s parading joyously in the Windy City’s Boystown neighborhood:

Celebrants are wearing masks in the video, as is the governor. Still, there is nothing resembling social distancing, especially for a governor who had voluntarily sent himself into self-quarantine for a second time less than a month before.

Regardless of his joy over Biden’s possible election victory, Pritzker had already appeared on TV, telling Illinoisans that he was renewing massive shutdowns in the Land of Lincoln. The week before Election Day, for instance, the governor had again ordered restaurants to shut down to prevent the virus’s spread.

“Unfortunately, the virus doesn’t make exceptions, and it would be ill-advised to make exceptions to the rules we put in place as the best mitigations to stop the spread,” Pritzker said on October 28, as he delivered more coronavirus shutdown edicts.

Indeed, only four days before he was seen celebrating in the streets, Pritzker was heard warning that more harsh shutdowns were coming.

Yet, Pritzker thought it was fine to join hundreds of people on the streets of Chicago. Chicago columnist Mark Konkol slammed the governor, saying, “But there was Pritzker weaving through crowds of people to celebrate Biden’s victory when a social video message would have been a safer way to celebrate, given the out-of-control coronavirus outbreak currently overtaking Illinois.”

What Makes Public-School Teachers Different from Everyone Else?

What Makes Public-School Teachers Different from Everyone Else?