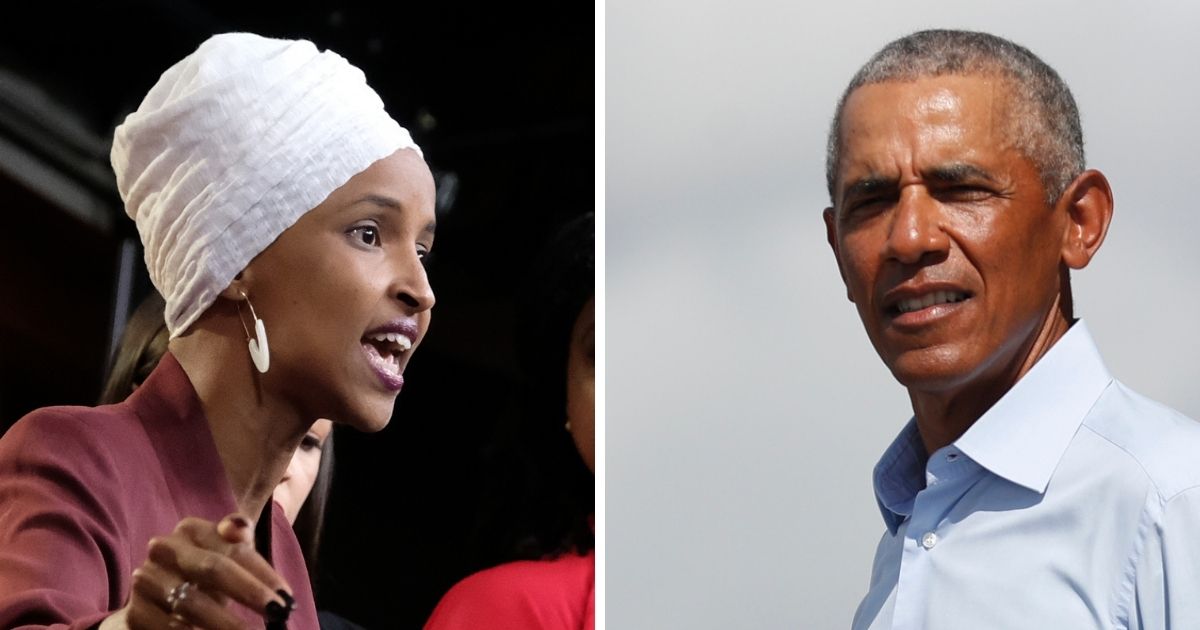 The “squad” is getting snippy with Barack Obama.

Hours after an interview went public Tuesday with the 44th president criticizing the “defund the police” movement as costing Democratic candidates dearly in the November election, the infamous Ilhan Omar of Minnesota took to Twitter with her own response.

And the spat doesn’t bode well for Joe Biden’s presumptive future at the head of the Democratic Party.

Democrat members of the “Squad” in the House of Representatives slammed former President Barack Obama for coming out against the “defund the police” slogan.

As National Review reported, the intraparty feuding kicked off after Obama criticized the “defund-the-police” Democrats as detrimental to the progressive project.

In an interview with the Snapchat documentary series “Good Luck America,” Obama said the radical leftist view of law enforcement is alienating many Americans.

“If you believe, as I do, that we should be able to reform the criminal justice system so that it’s not biased, and treats everybody fairly, I guess you can use a snappy slogan like ‘Defund the Police,’ but you know you’ve lost a big audience the minute you say it,” Obama said, according to National Review.

“Which makes it a lot less likely that you’re actually going to get the changes you want done.”

Do you think Democrats are getting too radical for even Barack Obama?

But the likes of Ilhan Omar and the “squad” of radical Democrats in the House aren’t interested in hearing it.

Instead, Omar slapped back with the implication that American police forces are a clear and present danger to the African-American community.

We lose people in the hands of police. It’s not a slogan but a policy demand. And centering the demand for equitable investments and budgets for communities across the country gets us progress and safety. https://t.co/Vu6inw4ms7

RELATED: Lindsey Graham Fires Back After Far-Left Reps Call for His Resignation

“We lose people in the hands of police,” she wrote. “It’s not a slogan but a policy demand. And centering the demand for equitable investments and budgets for communities across the country gets us progress and safety.”

There’s no doubt that black Americans are “lost” in the hands of police. White Americans, Asian Americans, and Americans of every stripe are “lost” to police every day — mainly as a result of criminal conduct that makes their “loss” a gain to the safety and security of their neighbors.

What Omar was doing was spreading the now depressingly familiar, and thoroughly debunked, idea that armed police officers make it a habit to kill unarmed black men.

This isn’t a question of opinion. It’s not a question of perspective. It’s a statement of fact that the idea that there’s some kind of carnage being inflicted by law enforcement in black communities is simply false.

As the inestimable Heather Mac Donald wrote in The Wall Street Journal in June:

“A solid body of evidence finds no structural bias in the criminal-justice system with regard to arrests, prosecution or sentencing. Crime and suspect behavior, not race, determine most police actions.” (emphasis added.)

That’s not the lie leftists peddle, and it’s not the “narrative” the mainstream media is so invested in. It’s just the inconvenient truth that’s studiously ignored by every Democratic politician who wants to keep his or her reputation intact when it comes to coverage by biased reporters.

And politicians like Omar and her squadmates, Rashida Tlaib of Michigan and Ayana Pressley of Massachusetts, must want very much to keep those reputations intact. They want it so much they’re willing to attack a man who has achieved demigod status on the largely godless left.

Rosa Parks was vilified & attacked for her civil disobedience. She was targeted. It’s hard seeing the same people who uplift her courage, attack the movement for Black lives that want us to prioritize health, funding of schools & ending poverty, rather than racist police systems.

“Rosa Parks was vilified & attacked for her civil disobedience,” Tlaib wrote. “She was targeted. It’s hard seeing the same people who uplift her courage, attack the movement for Black lives that want us to prioritize health, funding of schools & ending poverty, rather than racist police systems.”

OK. So, according to the “squad,” Obama is apparently on the same side as the crowd that attacked Rosa Parks, the seamstress whose quiet defiance in Jim Crow Alabama kicked off the Montgomery Bus Boycott, a landmark, yearlong battle in 1955-56 that became a milestone in the civil rights movement.

(Many don’t remember that in 1994, Parks was beaten and robbed in her home in Detroit. The guy who did it was arrested and sentenced to eight-to-15 years in prison, according to The Associated Press. In 2020, according to MLive, the same man was arrested and charged with a similar crime against an elderly woman in Grand Rapids, Michigan. If anyone’s curious, he wasn’t a cop.)

Pressley, meanwhile, checked in with a post that, in figurative language, held modern-day police forces accountable for the actions of the past. If that wasn’t bad enough, she literally declared that truth itself is subject to the beholder:

“The murders of generations of unarmed Black folks by police have been horrific. Lives are at stake daily so I’m out of patience with critiques of the language of activists.

“Whatever a grieving family says is their truth.

“And I’ll never stop fighting for their justice & healing.“

The murders of generations of unarmed Black folks by police have been horrific. Lives are at stake daily so I’m out of patience with critiques of the language of activists.

Whatever a grieving family says is their truth.

And I’ll never stop fighting for their justice & healing.

So, whatever a grieving family says is “their truth,” not to be gainsaid by paltry matters like evidence or the commission of a crime.

Rep. Alexandria Ocasio-Cortez of New York, for her part, was a late arrival to the spat, but published a tweet Wednesday claiming the “defund the police” slogan was a success because it got the attention of the American public.

The thing that critics of activists don’t get is that they tried playing the “polite language” policy game and all it did was make them easier to ignore.

It wasn’t until they made folks uncomfortable that there was traction to do ANYTHING even if it wasn’t their full demands.

“It wasn’t until they made folks uncomfortable that there was traction to do ANYTHING even if it wasn’t their full demands,” she wrote.

Yeah, well, they made enough “folks” uncomfortable that the Democratic Party likely lost any hope it had of regaining power in the Senate, and managed to lose seats in the House of Representatives against all expectations.

(And that doesn’t even count the presidential election, where President Donald Trump, running on a “law and order” platform, increased his votes by at least 11 million over the 2016 total. However that election is ultimately decided, it was not a smashing win for the window-smashing, police-defunding left).

And all of this — the restive “squad” and the millions of restless Democrats its members represent — is supposed to be managed by the putative party leader, former Vice President Joe Biden?

The man apparently can’t even manage to play with a dog without injuring his ankle, so how does the country or the Democratic Party expect him to be able to handle the warring factions in his own political base?

If the “squad” is snippy with Obama, its guiding light, it’s going to be worse with Biden — the Jerry Lewis to Obama’s Dean Martin, the hapless Ernie to Obama’s Bert, the ham-fisted incompetent Nicolas Maduro to Obama’s socialist Hugo Chavez.

That’s a formula for political disaster.

Diplomats contact Canadian held for over 2 years in China

How 1 Bottle of Nail Polish Turned Into a Struggling Mother...