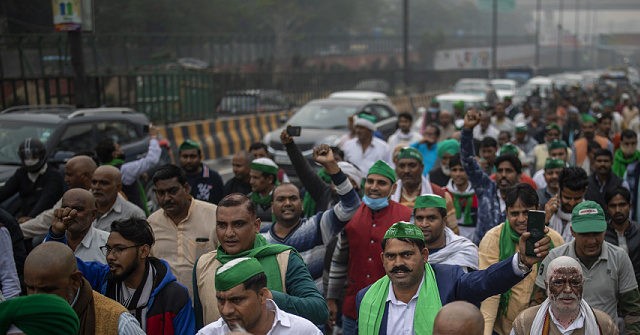 An estimated 65,000 farmers gathered on the outskirts of India’s national capital, New Delhi, on Tuesday to protest three new agricultural laws they say undermine their labor rights, the Times of India reported.

Tens of thousands of farmers have traveled to New Delhi since November 25 to participate in the protests, setting up camp on major roads leading into and out of the capital. The mass sit-ins, which continued for the 20th straight day on Tuesday, have blocked regional highways and significantly disrupted interstate transit and trade. The farmers say that three agricultural reforms passed by the Indian Congress in September undermine their traditional labor and farm price protections.

Farmers from the Sikh-dominated Indian state of Punjab constitute the majority of the protest’s participants. Haryana state, which also has a notable Sikh population, has sent a large number of farmers to take part in the demonstration as well.

“Data showed that 7,500-8,000 persons have been moving from Punjab to Delhi … daily over the past two-three days,” the Times of India reported on Tuesday, citing an Uttar Pradesh police source.

The states of Uttar Pradesh and Haryana border the national capital region of New Delhi; Punjab borders Haryana to its northwest.

“More people are going [to New Delhi] from the Malwa region of Punjab, where mobilization is stronger. The source added an estimate that showed that over 65,000 people from Punjab were on the Delhi borders [as of Tuesday],” the newspaper revealed.

“The Jaipur-Delhi national highway in Rajasthan’s Alwar district remained partially blocked as the farmers continues to protest against the farm laws [sic],” the Hindustan Times reported on Tuesday.

The Associated Chambers of Commerce and Industry of India (ASSOCHAM) issued a statement on Tuesday revealing that “[the] farmers’ protest [is] resulting in a daily loss of Rs 3500 crores,” or about $475,000 a day in the affected states of Punjab, Haryana, and Himachal Pradesh.

“With the ongoing farmers’ agitation and blockade of roads, toll plazas and railways, the economic activities have come to a halt. Industries such as textiles, auto components, bicycles, sports goods which cater significantly to the export markets would not be able to fulfill their orders, ahead of Christmas, harming our goodwill amongst the global buyers [sic],” ASSOCHAM President Niranjan Hiranandani said in the statement.

Indian Prime Minister Narendra Modi alleged on Tuesday that an opposition-backed conspiracy was “misleading” farmers to protest the new laws. He made the remarks during a public address to launch the construction of a new renewable energy park in Kutch, a city in India’s western Gujarat state.

“A conspiracy is going on around Delhi to confuse farmers. They are being scared that after the new agri reforms, the land of farmers will be occupied by others. Tell me, if a dairy has a contract of collecting milk from you, do they take away your cattle too [sic]?” Modi asked.

The prime minister said his government was “ready to clear every doubt that farmers have raised,” adding that the welfare of farmers has always been a top priority for his ruling, Hindu nationalist BJP party.

“The agriculture reforms that have taken place are exactly what farmer bodies and even opposition have been asking for over the years. The government of India is always committed to farmer welfare and we will keep assuring the farmers and addressing their concerns,” Modi said.