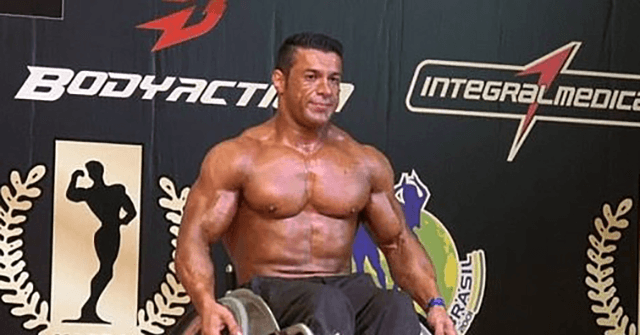 The Iranian regime arrested Paralympian athlete Reza Tabrizi on Tuesday because he dared to question the government’s response to the Wuhan coronavirus, specifically the decision to keep religious shrines open while shutting down fitness facilities.

Tabrizi’s supporters fear he could be executed, much as wrestler Navid Afkari was hanged in September for protesting against government corruption.

Iranian dissident Masih Alinejad said on Twitter that Tabrizi, a competitive powerlifter who uses a wheelchair, was not treated gently when he was dragged out of his gym by the religious police:

I got this shocking video from Iran. Reza Tabrizi, a disabled athlete, was violently forced into a police car & harassed by plainclothes agents as he struggled to walk.

He was arrested for asking why religious shrines are open while gyms are closed during covid. He faces death. pic.twitter.com/Mf1Qo7YcTA

According to local reports cited by i24 News, an “angry mob of religious zealots allegedly linked with Iranian Hezbollah” vandalized the gym after Tabrizi’s arrest. Members of Iran’s brutal Basij militia, a vigilante force sponsored by the theocracy’s Islamic Revolutionary Guard Corps (IRGC) were also present on the scene.

Tabrizi’s “offense” was writing an Instagram post that questioned the decision to close sports facilities in the Shiite holy city of Mashad, while still allowing pilgrims to pack into the city’s Imam Reza Shrine.

Prominent cleric Morteza Mustafazadeh, head of the Basij militia, demanded Tabrizi be executed for insulting the Shiite faithful and allegedly working as a “stooge” for French President Emmanuel Macron. Macron is currently the great global boogeyman of Islamist hardliners after his response to the savage beheading of a teacher by a Muslim refugee.

“This guy had posted a threatening insult on his Instagram account and thought that in the country ruled by our religious beliefs he could do any damn thing that he wants. Thanks be to God he is now behind bars,” Mustafazadeh wrote on Instagram after Tabrizi was arrested.

Tabrizi deleted his Instagram post and apologized for offending religious sensitivities after he was arrested. His family is pleading for him to be pardoned, while hardliners gathered in the Imam Reza shrine to demand his execution for “slandering” Shiite religious leaders.

“I apologize to all my friends and fans, and hereby state that the love of our religious saints runs in the blood of my family, and if as a result of a moment of negligence I have hurt your feelings, I do sincerely apologize and ask for your forgiveness,” Tabrizi’s statement read.

Gov. Cuomo threatens cuts without $15B in federal aid