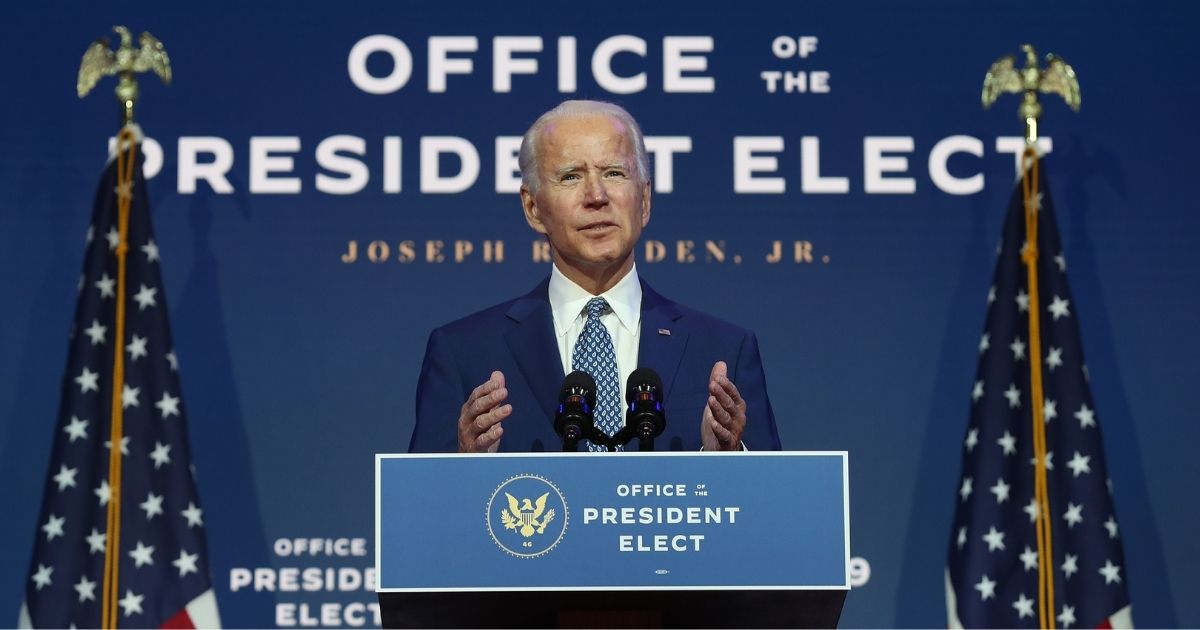 Biden declared that the country must unite and that the “election is over.”

But behind Biden’s posturing about unity, public health and politics was another message.

A banner behind the 77-year-old read “Office of the President-Elect.”

In fact, no such office exists.

The issue is not that Biden isn’t the president-elect — although that remains to be seen, given the recounts and court challenges that must play out before we can be sure that Biden defeated President Donald Trump.

Do you think Joe Biden will become the country’s 46th president?

It’s that even if he were the president-elect, there is no office for newly elected presidents to hold while waiting for their inauguration.

“President-elect” is simply a term for someone who has been elected, not an actual position — unless Biden’s Delaware basement is serving as some sort of quasi-official Wilmington White House that is recognized only by shadowy deep-state figures, the media and Corn Pop.

The former vice president holds no power in government, which is a fact that will remain up until he is inaugurated — if indeed he is.

To be fair, Barack Obama and Donald Trump also had “Office of the President-Elect” signs on the podium in their post-election appearances in 2008 and 2016, respectively, but at least in those cases they were the clear winners.

With Biden, votes are still being counted and a court fight is looming.

Sure, the mainstream media spent Saturday declaring him the victor, and reporters have been attempting to prop him up since that day.

The same media outlets that dragged Biden across the finish line in spite of himself are gaslighting the American people into believing that his victory is stamped, certified and delivered.

But the Democrat isn’t yet the clear victor.

Hopefully, we’ll know soon, one way or the other, if those who did vote for the swamp relic were alive, residents of their respective states and only voted once.

However, if questions remain, Biden, should he take office, is unlikely to be accepted as a legitimate figure by millions of Americans.

The former vice president is a buffoonish man with few positive attributes, no charisma and no mandate.

On top of that, polling already shows that a major swath of the electorate, post-election, isn’t even sure if Biden won, despite the establishment media’s best efforts.

A poll conducted by investigative reporter John Solomon’s Just the News and Rasmussen Reports found that only 49 percent of respondents believe Biden is the legitimate winner of the election.

Another 34 said Trump won, while 16 percent said they were not sure what to think.

According to JTN’s Daily Poll with @ScottWRasmussen, less than half of voters believe @JoeBiden is legitimate winner of election; a third say @realDonaldTrump won #JustTheNews #election2020 https://t.co/51x96It6LJ pic.twitter.com/puOPcH8XAk

That poll was conducted among 1,200 registered voters from Nov. 5-7 and has a margin of error of plus or minus 2.8 percent.

When you add up those who think Trump won with the undecideds, 50 percent of the country hasn’t ruled out that the president might have earned a second term.

If Biden is inaugurated, he could start off his term without the confidence of half of the country.

Perhaps that’s where his new “Office of the President-Elect” comes from.