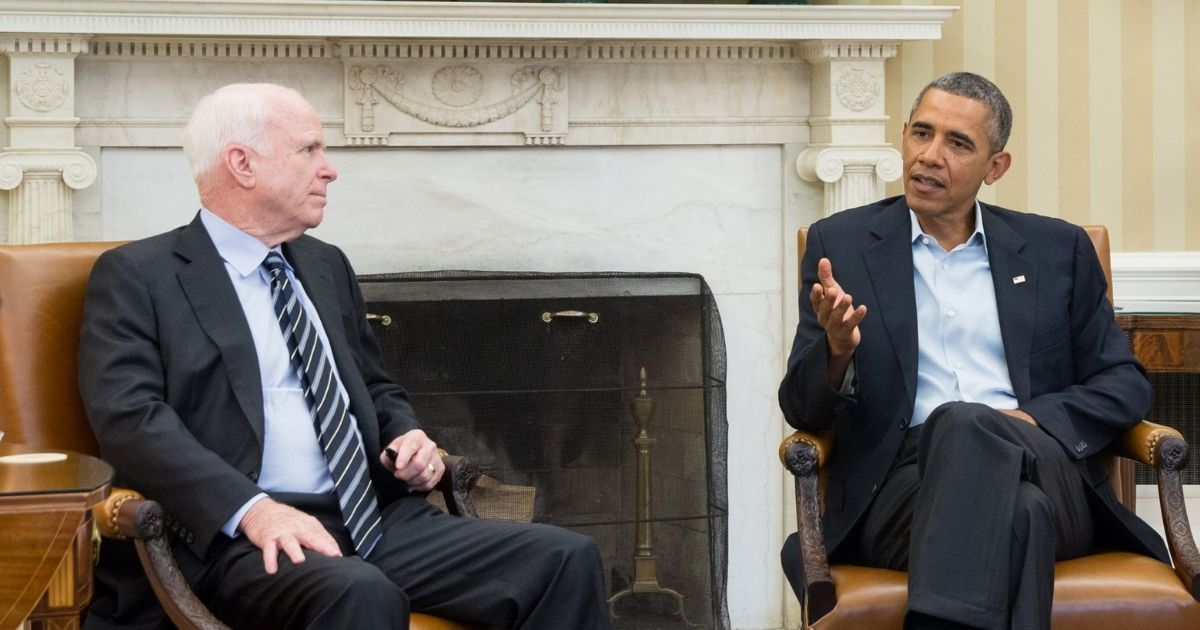 Former President Barack Obama said in a recent interview that the late Sen. John McCain, a Republican, confided in him to privately disparage members of his own party.

In an interview with The Atlantic released on Monday, Obama discussed at length his presidency, current events, and his upcoming 768-page memoir in which he attacks the Republican Party base.

When speaking with The Atlantic’s Jeffrey Goldberg, Obama hinted that he wasn’t alone in his criticism of Republicans.

McCain, who Obama defeated in the 2008 presidential election, was not always complimentary of his GOP colleagues, nor was former GOP House Speaker John Boehner, according to the former president.

Goldberg asked Obama if he regrets not making a more public attempt at befriending Republicans in Congress.

“Should you have been caught trying more … Meaning, drinking with [Sen. Mitch McConnell] more often, working the opposition?” Goldberg asked.

Obama responded, “Look, this comes out more in volume two, and I will be more explicit on this, but take [former House Speaker] John Boehner for example. He and I had a perfectly good relationship, but he had to act a certain way for his caucus,” Obama said.

“He would badmouth many of them to me, in private. Much as John McCain did. The issue was never personal — Mitch McConnell is not buddy-buddy with anyone. I’m enjoying reading now about how Joe Biden and Mitch have been friends for a long time.”

Obama went on to claim that GOP figures such as McCain, McConnell, and Boehner — who resigned from the House in 2015 — were all privately at one point willing to work with him, but they only publicly spoke out against him to appease their voters.

Are you glad to see that many former GOP stars are being outed as RINOs?

“The issue was that they found it politically advantageous to demonize me and the Democratic Party. This was amplified by media outlets like Fox News,” Obama said.

“Their voters believed this, and over time Republicans became so successful in their demonization that it became very difficult for them to compromise, or even be seen being friendly.”

Obama, according to an excerpt of his book, titled “A Promised Land,” also wrote about McCain’s decision to choose then-incumbent Alaska Gov. Sarah Palin as his 2008 running mate.

“I’d like to think that given the chance to do it over again, [McCain] might have chosen [his running mate] differently,” Obama wrote, according to CNN.

He also launched attacks against Palin, President Donald Trump and the GOP base.

“Through Palin, it seemed as if the dark spirits that had long been lurking on the edges of the modern Republican Party — xenophobia, anti intellectualism, paranoid conspiracy theories, an antipathy toward Black and brown folks — were finding their way to center stage,” Obama wrote.

Obama also wrote, per the excerpts obtained by CNN, that President Trump took advantage of racism to win the 2016 Republican primary.

“It was as if my very presence in the White House had triggered a deep-seated panic, a sense that the natural order had been disrupted,” Obama wrote.

“Which is exactly what Donald Trump understood when he started peddling assertions that I had not been born in the United States and was thus an illegitimate president.”