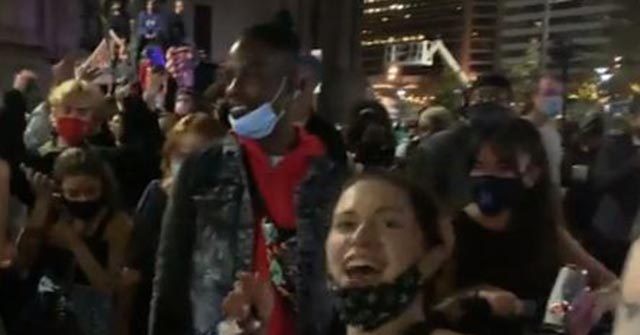 A large crowd danced and chanted “fuck Donald Trump!” in the street outside Philadelphia’s City Hall on Saturday night.

Drivers honked their horns and people screamed while the group celebrated the media declaring Joe Biden (D) the winner of the presidential election.

Several people held Biden-Harris signs, and one woman waved a Biden-Harris flag. At one point someone threw glitter in the air as the crowd cheered and continued to dance.

Progressives gloated on social media Saturday once the mainstream media outlets provided their projection that Biden was the winner.

“I am exceedingly overjoyed that Trump has been defeated & that the Biden-Harris team have an opportunity to undo the harm this undeserving Prez has caused the country,” wrote Rep. Maxine Waters (D-CA).

In addition, a man with a Black Lives Matter flag danced while holding an effigy of a beheaded President Trump at a protest in Madison, Wisconsin.

In a statement to corporate media on Saturday, Trump said, “We all know why Joe Biden is rushing to falsely pose as the winner, and why his media allies are trying so hard to help him: they don’t want the truth to be exposed.”

He added that “legal votes decide who is president, not the news media.”