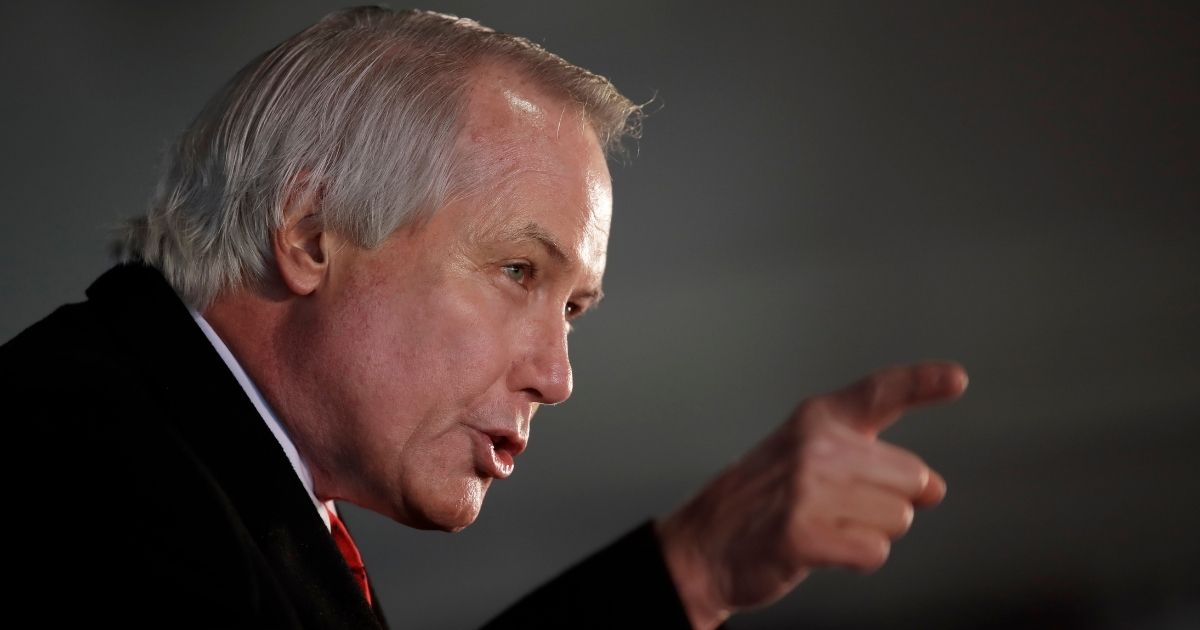 After all, some clowns work very hard at what they do. No well-adjusted adult likes a clown, but they’re still intentionally funny at times.

Philippe Gaulier, the famous French clown, is a notorious comic pedant whose school of clownery counts Sacha Baron Cohen among its graduates. Emmett Kelly, whose tramp characters are etched in the annals of pop culture history, is an icon of Great Depression America. Even Chuckles the Clown gave us the funniest episode of “The Mary Tyler Moore Show,” although he’s never seen on screen. He put a little song and a little dance in our hearts, however. Just don’t ask about the seltzer and the pants.

So what do you call Lin Wood? A joke? Jokes, again, are deliberately funny. A tool? Wrenches are useful.

Instead, I have another word you might not suspect to describe him: Democrat.

This isn’t just me being salty. According to Georgia voting records published by GeorgiaPol.com, Wood has voted in Democratic primaries since 2006.

Meanwhile, Wood’s political donation history shows he’d only given to a handful of Republicans before Donald Trump. However, he gave to plenty of Democrats.

Yes, Wood — an Atlanta trial attorney known for taking on high-profile cases with a conservative bent — is generally a favorite of those on the right. He’s represented people such as falsely accused Atlanta Olympic bomber Richard Jewell, GOP presidential candidate Herman Cain and Nicholas Sandmann, the Covington Catholic student smeared by the media when a viral confrontation with professional activist Nathan Phillips at the Lincoln Memorial in Washington, D.C., went viral in January 2019.

Somewhere along the line, though, either things went very wrong for Wood or we hadn’t seen the danger signs coming. There was the familiar dispiriting QAnon hashtag on his Twitter profile, which should have told us that something was up. This was Lin Wood, though, who had a reliable record as a voice of vigorous conservatism. Once the election results came into question, Wood sprang into action in a way that left many conservatives wishing he’d remained unsprung.

Do you think Lin Wood should be encouraging Republicans not to vote in the Georgia runoff?

How bad has it gotten? Wood, along with fellow conservative attorney Sidney Powell, is now telling Georgians not to vote in the January Senate runoffs.

According to the Daily Mail, he has said he won’t support GOP Sens. David Perdue and Kelly Loeffler unless they back his demand that the Georgia legislature meet in a special session and send pro-Trump electors to the Electoral College in place of the electors for Democrat Joe Biden.

Whatever the case, Wood said at a rally Wednesday in Alpharetta, the runoff vote will be “rigged.”

“Do not be fooled twice. This is Georgia, we ain’t dumb,” he said.

“Why would you go back and vote in another rigged election? For God’s sake, fix it. You got to fix it before we’ll do it again,” Wood said.

“They have not earned your vote. Don’t you give it to them. Why would you go back and vote in another rigged election for god’s sake! Fix it! You gotta fix it!” pic.twitter.com/Uvj1QIpqFL

It’s the kind of sentiment that would earn him a thumbs-up from China.

The Trump campaign apparently distanced itself from Wood on Wednesday night by sharing a story about his political past on Twitter.

Records: Lin Wood Has for Decades Voted for, Donated to Democrats Including Barack Obama and David Perdue’s 2014 Opponent https://t.co/Sbw5ZWnpar

It’s interesting what outlets reported on the attorney’s comments. NPR, for instance, gave the event coverage. So did Newsweek, The Daily Beast and Business Insider.

The rally wasn’t particularly well-attended, and none of those organizations is known for covering voter fraud claims with either seriousness or relish. This time they were more than happy to, for reasons you can probably ascertain.

Conservative outlets and pundits, meanwhile, have covered Wood and Powell’s Georgian barnstorming tour, albeit with a bit more alarm.

“There is no evidence that Lin Wood and Sidney Powell are secretly working for the Democratic National Committee, but no one has definitively disproved it, either,” National Review editor Rich Lowry wrote in a Wednesday piece for Politico.

“The two Trump-allied lawyers have made themselves into wrecking balls against the Republican Party of Georgia, whose top elected officials, they allege, are involved in the most dastardly and far-reaching conspiracy in American history.”

Yes, in case you haven’t been paying attention, Wood believes there’s a conspiracy that goes so deep that Georgia Gov. Brian Kemp and Secretary of State Brad Raffensperger — both allies of Trump’s until the vote count in the Peach State — are in on it.

Here’s what Wood thinks Kemp ought to do:

Here is a suggested course of action for GA Governor @BrianKempGA:

Accountability for wrongdoing is called JUSTICE.#FightBack for Justice

Here are some of Wood’s other tweets, which took the president’s frustrations with the Georgia recount and put a problematic spin on them:

The recount in GA is a sham. Just like the back room deal @GaSecofState made with Democrats & Clinton lawyers to change absentee ballot rules. Only legislature can change rules.

If @BrianKempGA resigns or is recalled, do we want Lt. Gov. @GeoffDuncanGA?

You can tell about about someone by his or her friends.

I have serious concerns about Geoff. https://t.co/dGNfB8MPlT

So, as for that part about “secretly working for the Democratic National Committee,” well, that probably can’t be proved. What we can note is that Wood has only voted in Democratic primaries over the past 15 years, according to GeorgiaPol.com.

Georgia uses an open primary system, which means you can vote in either party’s primaries. While Breitbart reported he hasn’t requested a ballot in Republican races since 2004, he has requested primary ballots for five different Democrat congressional races in the state, including as late as 2018.

It’s also his donations, according to Federal Election Commission records. Wood gave money to Democrat John Edwards’ 2004 presidential race, although he later donated to George W. Bush’s re-election campaign as well. He donated to Barack Obama in 2008. In 2016, before he got behind Donald Trump, he gave money to GOP Ohio Gov. John Kasich — hardly a MAGA guy.

At the state level, there’s even more of an issue. As late as 2017, he gave $12,600 to Georgia gubernatorial candidate Stacey Evans, a Democrat, who lost to Stacey Abrams in the primary. In 2014, he gave $5,000 to Democratic state Sen. Jason Carter as he ran for governor. He donated $500 to former Democrat Gov. Roy Barnes’ comeback attempt in 2009. He also donated $1,000 to a leftist group called Georgia’s Win List — and this is just the tip of the iceberg.

This doesn’t necessarily mean that Lin Wood is a Democrat. It’s unusual that someone we thought was so reliably conservative has a strange voting and political donation record, but there wasn’t really any reason to question Wood’s bona fides before this. And, yes, while I’m both consternated with and concerned by Wood’s recent behavior, which could cost Republicans the Senate while bringing us no nearer to ferreting out fraud in the 2020 election, Wood has done amazing work for conservatives before. I hope he will again. The same thing goes for Sidney Powell.

For right now, he’s a clown — except what he’s pushing is no laughing matter.