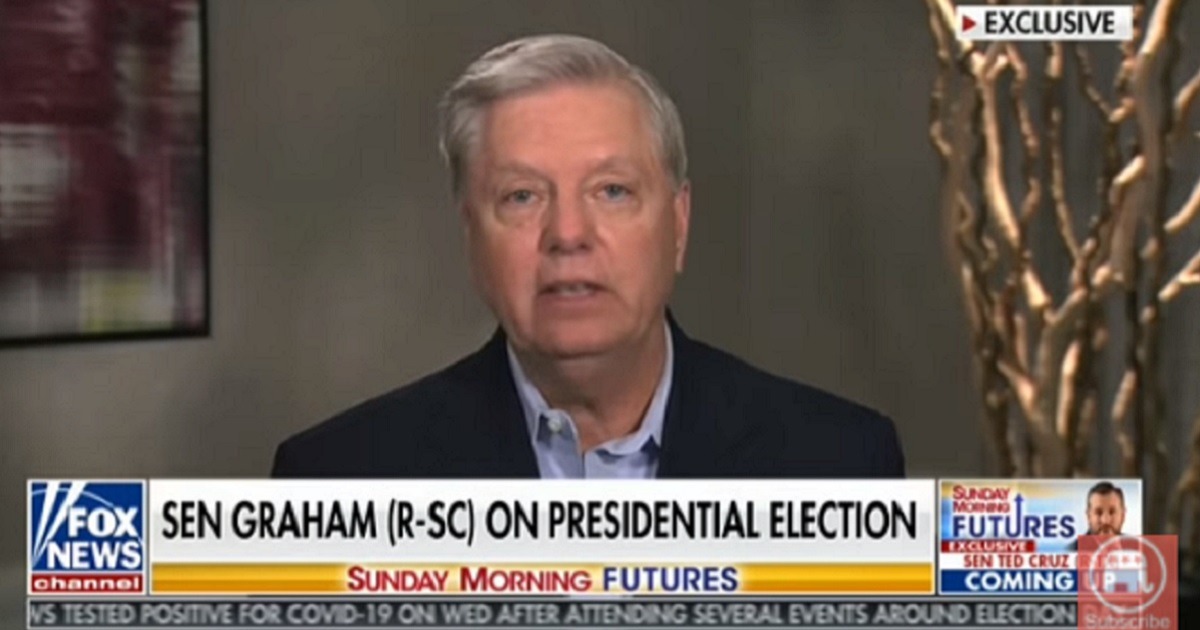 Fresh off a victory that proved how wrong the polls and the mainstream media can be when it comes to election forecasts, U.S. Sen. Lindsey Graham had some spot-on advice for President Donald Trump when it comes to the still-undecided presidential contest:

Don’t give up. The future can’t afford it.

“The media doesn’t decide who becomes president. If they did, you would never have a Republican president for forever, so we’re discounting them,” Graham said.

The senator from South Carolina obviously knows a thing or two about how safe the mainstream media can be when it comes to coverage of national issues.

Besides being a Republican target of liberal attacks himself, he was a front-row witness as a member of the Senate Judiciary Committee in 2018 when the unholy alliance of Democratic politicians and utterly unscrupulous reporting for major outlets like The New York Times attempted to destroy Supreme Court nominee Brett Kavanaugh in a character assassination carried out in full view of the watching public.

As recently as the past few months month, Graham was portrayed as on the losing end of some poll numbers to his well-funded Democratic challenger, Jaime Harrison, a former chairman of the South Carolina Democratic Party.

Harrison, who collected a mind-blowing $57 million in the final quarter of his campaign against Graham, according to CNN, was widely viewed in polls and the mainstream media as a good chance to drive the veteran GOP senator out of office.

Democrats had a target on Graham because of his defense of Kavanaugh in 2018 and, now that he’s the chairman of the Judiciary Committee, his successfully shepherding the nomination of now-Justice Amy Coney Barrett through the process.

But when Election Day rolled around, despite the jaw-dropping spending by liberals, and despite polls that showed him roughly even with Harrison, Graham cruised to a 10-point win, according to The New York Times.

So Graham knows what tough elections look like. He knows what relentless attacks from the mainstream media look like – much as Trump does.

And he knows the stakes involved in continuing to fight — and the reasons to keep fighting — even if the major news networks and The Associated Press are working to convince Americans otherwise by calling the races as Biden’s for good.

“If Republicans don’t challenge and change the U.S. election system, there’ll never be another Republican president elected again. President Trump should not concede.”

It was a line spoken in the third-person, as though Graham were simply commenting on the situation. But it’s easy to see that he was sending a message directly to the White House, too.

“There are allegations of system failure, fraud.

“Keep fighting for every legal and live vote.”

That “live vote” wasn’t a joke. Graham cited Pennsylvania as one state where cemeteries are apparently also voting precincts, as well as a “glitch” in a computer program used in Michigan that literally switched Republican votes to Democratic votes. Boss Tweed’s Tammany Hall machine would be envious.

“To my Republican colleagues out there: We have to fight back or we will accept our fate. I want Pennsylvania to explain to the American people how six people, after they died, can register and vote in Pennsylvania.

“I want the computer systems in Michigan that flipped votes from Republicans to Democrats to be looked at. And the software was used all over the country.

“There’s a lot of shenanigans going on here.”

Nothing in the year 2020 has been certain, of course, since the coronavirus migrated from China to wreak havoc on the world — and the American presidential election.

Do you believe President Donald Trump can still win this election?

But Graham is right. No matter how many networks “call” the election, and no matter how many television and radio broadcasters insist on intoning the words “President-elect Joe Biden,” the election isn’t over until the Electoral College votes in December, and the House of Representatives certifies that vote in January.

Until that happens, the winner of the 2020 vote is not certain, and Trump and his supporters should remember the words of Hillary Clinton in the run-up to the vote: “Joe Biden should not concede under any circumstances.”

There’s vote-counting to complete. There is the possibility of recounts in tight states. And there are court challenges to be decided.

There is, in short, plenty of time for developments to occur that could well swing this election around and put Trump in the White House for four more years.

It’s what the country’s economy needs. As the recent, remarkable progress toward peace in the Middle East has shown, it’s what the world needs.

And now isn’t the time to give it up — not by a long shot.